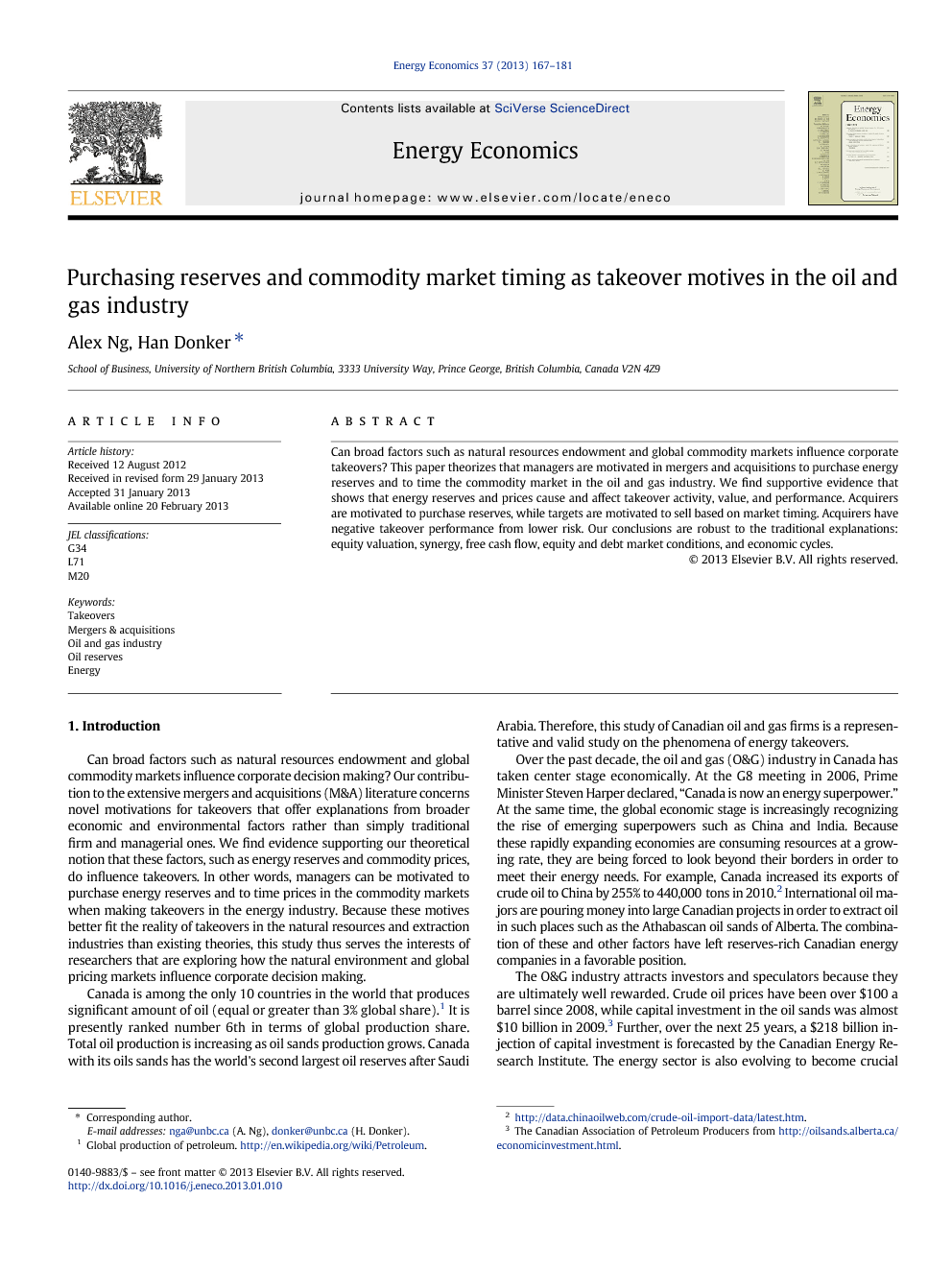 Can broad factors such as natural resources endowment and global commodity markets influence corporate takeovers? This paper theorizes that managers are motivated in mergers and acquisitions to purchase energy reserves and to time the commodity market in the oil and gas industry. We find supportive evidence that shows that energy reserves and prices cause and affect takeover activity, value, and performance. Acquirers are motivated to purchase reserves, while targets are motivated to sell based on market timing. Acquirers have negative takeover performance from lower risk. Our conclusions are robust to the traditional explanations: equity valuation, synergy, free cash flow, equity and debt market conditions, and economic cycles.

Can purchasing reserves and market timing motivate takeovers? We examined a sample of M&A deals in the O&G industry in Canada from 1990 to 2008 and found that energy reserves and prices have both causal and relationship effects on takeover activity, value, and performance. This evidence supports our notion that energy reserves and prices, broad economic factors, influence corporate decision making in takeovers. In other words, when energy firms make takeovers, they aremotivated to increase their reserves because this action ultimately increaseswealth. Moreover, they time the market for energy price changes to affect the takeover. Our results on these motivations seem to hold in the presence of the traditional determinants of takeovers such as synergy gains, agency costs, and elevated stock market prices. The key implication from this study is that our conclusions about purchasing reserves and commodity timing motivations for takeovers could better fit the reality of takeovers in the natural resources and extraction industries compared with existing theories. Moreover, the market for corporate control in the O&G industry will continue to be competitive and wealth increasing for shareholders as reserves continue to diminish and energy prices increase in the long-term. At the same time, it is clearly acknowledged that these motivations could be limited to these industries as well. In the case of Canada and many other resources-rich countries, these industries are vitally important to their economies, and thus this study of these industries can have merit. Our paper's study of the O&G industry amply shows how macroeconomic effects, in addition to fundamental firm factors, influence corporate M&A.