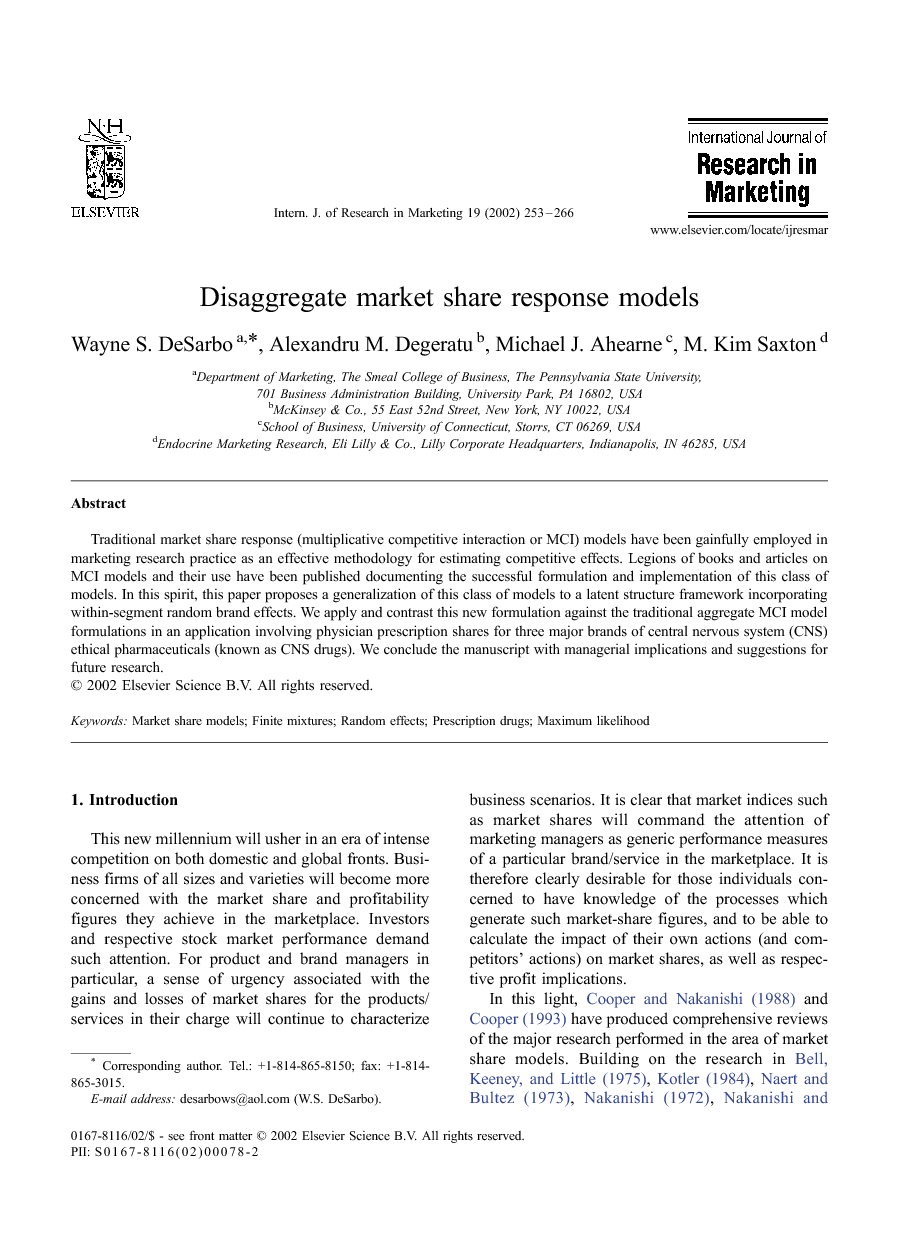 Traditional market share response (multiplicative competitive interaction or MCI) models have been gainfully employed in marketing research practice as an effective methodology for estimating competitive effects. Legions of books and articles on MCI models and their use have been published documenting the successful formulation and implementation of this class of models. In this spirit, this paper proposes a generalization of this class of models to a latent structure framework incorporating within-segment random brand effects. We apply and contrast this new formulation against the traditional aggregate MCI model formulations in an application involving physician prescription shares for three major brands of central nervous system (CNS) ethical pharmaceuticals (known as CNS drugs). We conclude the manuscript with managerial implications and suggestions for future research.

Understanding what drives market share will con- tinue to be a primary concern of marketing managers worldwide. In some markets, such as the pharmaceut- ical industry, where share data for individual custom- ers are available with increasing frequency (e.g., both monthly and weekly behavior can be purchased from data suppliers in pharmaceuticals), understanding what drives share at either the individual customer level or among groups of customers has become increasingly important. By understanding which cus- tomers to target promotions, especially expensive marketing mix elements like sales forces, and which parts of the marketing mix to utilize, marketing managers will be better able to maximize the return on their promotional investments. The models devel- oped in this paper provide additional insight to mar- keting managers because they simultaneously uncover the key determinants of market share for competitorsas well. As a result, they should be able to develop stronger marketing strategies that allow them to obtain the competitive advantage required for maximal mar- ket success. Future research in this methodological area can develop along a number of alternative paths. One, further commercial applications are needed along a wider range of products and services. Two, more complex models can be constructed which allow for continuous heterogeneity within segments across all coefficients utilizing hierarchical Bayesian methods (cf. Lenk & DeSarbo, 2000 ). Three, comparative studies tracking predictive validity across a wide range of models and products is needed. Four, finite sample properties of the derived estimates need to be exam- ined carefully, especially in saturated fully extended MCI models and their generalizations. Five, future research effort should be allocated toward the develop- ment of a generalized latent structure MCI model with varying forms of coefficient heterogeneity, together with nested model statistical tests for model selection. Finally, empirical comparisons with latent structure models (e.g., finite mixtures of multivariate log-nor- mal distributions) modeling the volume (not shares) of prescriptions which would more closely represent the financial revenue obtained from each physician might prove beneficial in terms of better evaluating and targeting the derived market segments