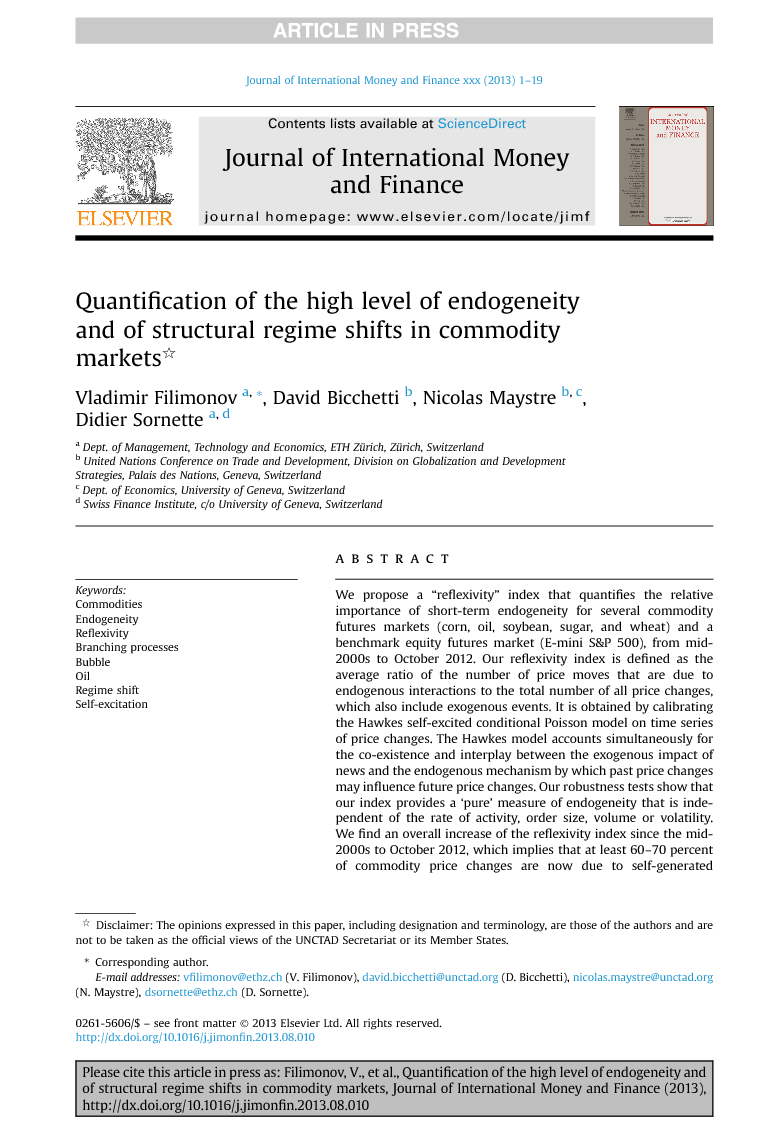 We propose a “reflexivity” index that quantifies the relative importance of short-term endogeneity for several commodity futures markets (corn, oil, soybean, sugar, and wheat) and a benchmark equity futures market (E-mini S&P 500), from mid-2000s to October 2012. Our reflexivity index is defined as the average ratio of the number of price moves that are due to endogenous interactions to the total number of all price changes, which also include exogenous events. It is obtained by calibrating the Hawkes self-excited conditional Poisson model on time series of price changes. The Hawkes model accounts simultaneously for the co-existence and interplay between the exogenous impact of news and the endogenous mechanism by which past price changes may influence future price changes. Our robustness tests show that our index provides a ‘pure’ measure of endogeneity that is independent of the rate of activity, order size, volume or volatility. We find an overall increase of the reflexivity index since the mid-2000s to October 2012, which implies that at least 60–70 percent of commodity price changes are now due to self-generated activities rather than novel information, compared to 20–30 percent earlier. While our reflexivity index is defined on short-time windows (10–30 min) and thus does not capture long-term memory, we discover striking coincidence between its dynamics and that of the price hikes and abrupt falls that developed since 2006 and culminated in early 2009.

The increasing importance of non-traditional participants on commodity futures markets over the last decade — referred to as the “financialization” of commodity futures markets (Domanski and Heath, 2007) — coincided with another major structural change in trading: the transition from an open outcry trading platform to a computer/electronic order matching platform. These two structural changes resulted, at the very least, in the following developments. First, market access expanded. Second, direct trading costs declined. Third, investments tracking a commodity index became an accepted alternative investment for institutions and pension funds. Fourth, exchange traded funds and synthetic investment vehicles that tracked or are based on commodity indices or even single futures markets were introduced. As a result, these changes undoubtedly contributed to the increase in the volume of trade on commodity futures markets (Irwin and Sanders, 2012). Arguably, the growing liquidity emanating partly from the financialization of commodity markets, coupled with a shift in trading strategies and technological progresses, has favored the expansion of quantitative trading on commodity futures markets. In parallel, many commodity prices have experienced roller-coaster rides since the mid-2000s. Overall, these developments have fueled an intense debate regarding the roles of financial investors and quantitative trading. Disagreements relate to whether these new actors have improved the price discovery process of commodities futures markets or whether they have made the process less effective and more unstable. The proponents of these developments argue that the benefits are at least threefold. First, futures prices become closer to their underlying fundamentals. Second, liquidity increases. Third, risks are transferred to agents who are better prepared to assume it (see e.g. Stoll and Whaley, 2010, Stoll and Whaley, 2011 and Irwin and Sanders, 2012 and references cited therein). In short, this process supports the efficient market hypothesis (EMH) (Samuelson, 1965, Fama, 1970 and Fama, 1991). By contrast, other observers argue that financial investors and quantitative trading can have negative effects on commodity markets because they distort the price formation process (see e.g. UNCTAD, 2009, UNCTAD, 2011, Tang and Xiong, 2010 and Bicchetti and Maystre, 2012 and references cited therein). In some occasions, these prices distortions culminated in “speculative bubbles”1 in commodity prices (see e.g. Gilbert, 2007 and Phillips and Yu, 2011 and references cited therein). To contribute to this debate, we analyze the microstructure of several commodity futures markets at short time scales and provide quantitative dynamic estimates of their degree of reflexivity. More precisely, we present a measure of the “reflexivity” or endogeneity of high-frequency price movements, defined as the average ratio of the number of price moves that are due to endogenous interactions to the total number of all price changes, which also include exogenous events. Robustness tests show that our measure of endogeneity is independent of the rate of activity, order size, volume or volatility. We calibrate our measure on several commodity futures markets (corn, oil, soybean, sugar, and wheat) and also on a benchmark equity futures market (E-mini S&P 500). The obtained reflexivity index shows that at least 60–70 percent of commodity price changes are now due to self-generated activities rather than novel information, compared to 20–30 percent in the mid-2000s. Our results question the strict tenet of the EMH that the market absorbs in full and essentially instantaneously the flow of information by faithfully reflecting it in asset prices. Our finding that past price changes can trigger a large fraction of subsequent price variations implies at the very least that the information digestion process of markets is not that efficient. While additional evidence is needed to fully ascertain this point, our findings suggest even that Soros (1987)’s concept of “market reflexivity” may be relevant, namely that a great deal of what occurs on financial markets is not much related to fundamental information but rather to a circular loop between trading and price. We complement our analysis by relating the endogeneity dynamics of these futures markets to their price dynamics, particularly around the commodity bubble that developed since 2006 and culminated in mid-2008. While our reflexivity index is, by nature, designed to study only short-term price developments, interestingly, we find in some occasions a remarkable coincidence between the price dynamics at long time scales and the time dynamics of trades at short terms. The paper is organized as follows. Section 2 briefly reviews the economic literature on news and commodities, and more generally on assets and prices, highlighting the main differences between our approach and the more traditional analyses. We also discuss possible sources of endogeneity and explain why our index primarily captures short-term mechanisms of algorithmic and high-frequency trading and is, a priori, less adequate to study the impact of long-term mechanisms. In Section 3, we present the class of mathematical models called branching processes and explain how they can provide a measure of endogeneity. Focusing of the Hawkes branching model, we discuss its underlying assumptions and condition for validity. The “reflexivity index” is defined and the methodology of its estimation is explained. Section 4 presents our results on the reflexivity index calibrated on commodity markets. Section 5 concludes.

We have analyzed the evolution of the degree of short-term endogeneity for the commodity futures markets since the second half of the 2000s, when the considered commodity exchanges moved from pit trading to full electronic platforms. On average, our estimates show that more than one out of two price changes is triggered by another preceding price change, which can be interpreted as the actions of “self-reinforcing” mechanisms. In particular cases, we have documented excursions of the reflexivity index up to levels in the range 80–85% and higher, as for example in Brent and WTI futures over the run-up and crash periods of 2008; Sugar #11 contract in the second half of 2012 or the benchmark E-mini contracts over 2010–2012. As discussed, even these high estimates are conservative, since they take into account only mechanisms that operate at scales below 10 min and neglect contagion effects across assets. As discussed in Section 3.1, the documented high levels of endogeneity are likely to make the price formation process less efficient, because higher endogeneity implies a slower convergence towards fundamental (equilibrium) value. Moreover, high levels of endogeneity imply the existence of a large susceptibility of the system with respect to external shocks. When the price discovery process is dominated by the internal feedback mechanisms (as opposed to external novel information), this endogenous trading may “amplify” even a small initial shock to the system, turning it into the large crash or rally. The most illustrative example is indeed the “flash-crash” of May 6, 2010, when an initial large market order triggered a flurry of activities by high frequency traders resulting in a large drop of the price of S&P 500 E-mini futures. As shown in Filimonov and Sornette (2012), this event was accompanied (and even preceded) by a fast increase of the branching ratio to the 95% level. Over the recent few years, in part due to the development of algorithmic and high-frequency trading, mini “flash-crashes” and anomalous events regularly shock markets across the world, and commodity markets are no exception. Considering just theWTI futures contracts over the single year of 2012, several wild excursions were experienced, such that price plunged/spiked with swings of 1–3% in a matter of seconds or minutes.10 Our preliminary systematic unpublished analysis of such events using the methodology of the present article indicates that many of them share the same footprint as observed in the dynamics of the reflexivity index as shown during the E-mini “flash crash” event analyzed in Filimonov and Sornette (2012). While our reflexivity index does not have a long-term memory, interestingly, we found that it can still provide some interesting insights when the mechanisms working at longer time scales cascade down to shorter terms, as occurred during the Oil bubble that culminated in July 2008 and crashed until December 2008. At that time, according to our analysis, the short-term endogeneity of oil futures market reached the level that was achieved by the financial market (proxied by the E-mini contracts) only two years later d in 2010. Summarizing, our results suggest that the financialization of commodity markets has not been accompanied with an increase of market efficiency compared with time preceding the rise of electronic trading. Despite the significant increasing level of trading and market participation, we have observed signatures that suggest that the price discovery process has become in fact less efficient, in stark contrast with the usual postulated hypothesis. Our findings therefore question the rational for expanding a market participation base as it happened with the deregulation of the commodity market.