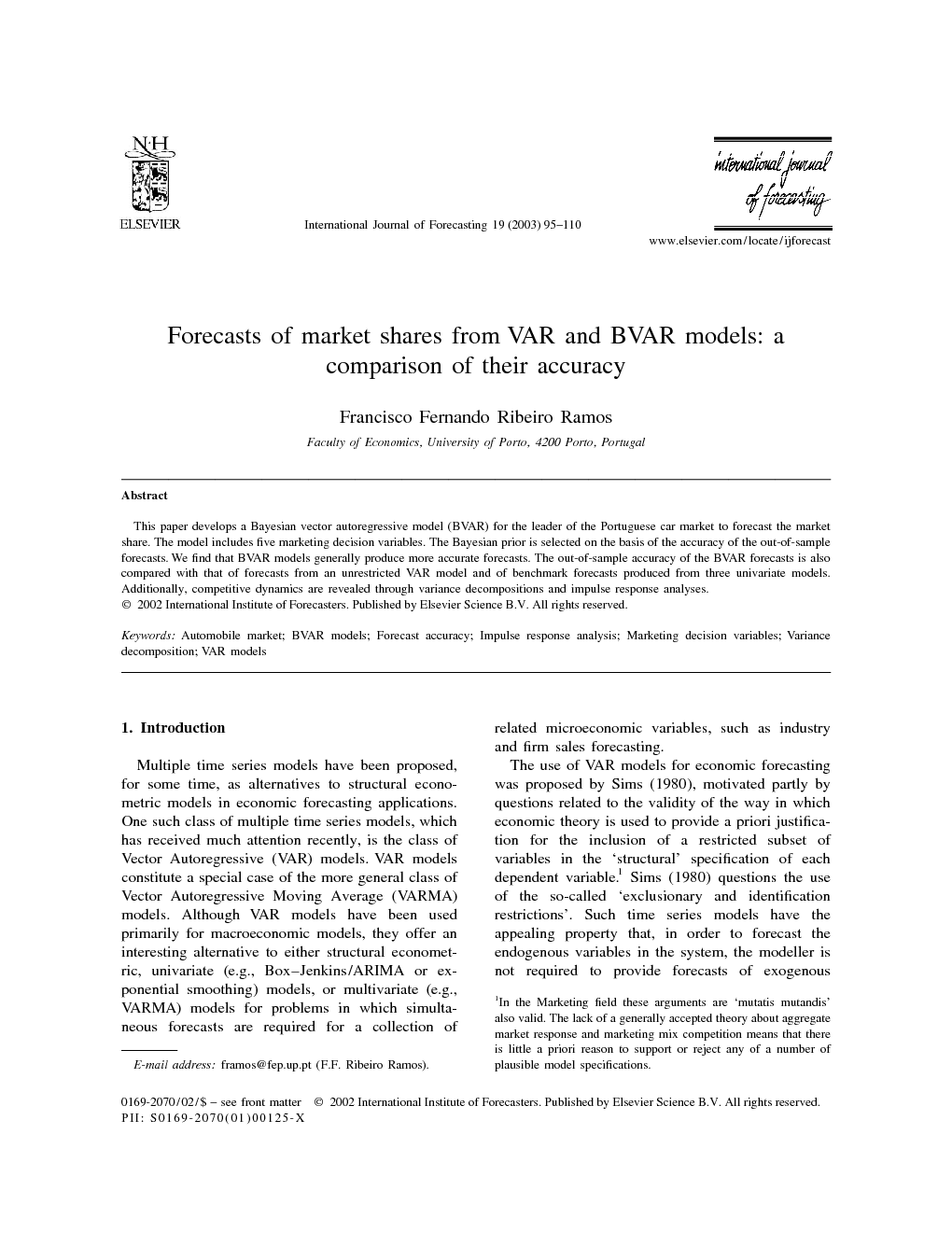 This paper develops a Bayesian vector autoregressive model (BVAR) for the leader of the Portuguese car market to forecast the market share. The model includes five marketing decision variables. The Bayesian prior is selected on the basis of the accuracy of the out-of-sample forecasts. We find that BVAR models generally produce more accurate forecasts. The out-of-sample accuracy of the BVAR forecasts is also compared with that of forecasts from an unrestricted VAR model and of benchmark forecasts produced from three univariate models. Additionally, competitive dynamics are revealed through variance decompositions and impulse response analyses.

Multiple time series models have been proposed, for some time, as alternatives to structural econometric models in economic forecasting applications. One such class of multiple time series models, which has received much attention recently, is the class of Vector Autoregressive (VAR) models. VAR models constitute a special case of the more general class of Vector Autoregressive Moving Average (VARMA) models. Although VAR models have been used primarily for macroeconomic models, they offer an interesting alternative to either structural econometric, univariate (e.g., Box–Jenkins/ARIMA or exponential smoothing) models, or multivariate (e.g., VARMA) models for problems in which simultaneous forecasts are required for a collection of related microeconomic variables, such as industry and firm sales forecasting. The use of VAR models for economic forecasting was proposed by Sims (1980), motivated partly by questions related to the validity of the way in which economic theory is used to provide a priori justification for the inclusion of a restricted subset of variables in the ‘structural’ specification of each dependent variable.1Sims (1980) questions the use of the so-called ‘exclusionary and identification restrictions’. Such time series models have the appealing property that, in order to forecast the endogenous variables in the system, the modeller is not required to provide forecasts of exogenous explanatory variables; the explanatory variables in an econometric model are usually no less difficult to forecast than the dependent variables. In addition, the time series models are less costly to construct and to estimate. This does not imply, however, that VAR models necessarily offer a parsimonious representation for a multivariate process. While it is true that any stationary and invertible VARMA process has an equivalent representation as a VAR process of an eventual infinite order (see, for example, Fuller, 1976), generally the VAR representation will not be as parsimonious as the corresponding VARMA representation, which includes lags on the error terms as well as on the variables themselves. Despite this lack of parsimony, and the additional uncertainty imposed by the use of a finite-order VAR model as an approximation to the infinite-order VAR representation, VAR models are of interest for practical forecasting applications because of the relative simplicity of their model identification and parameter estimation procedures, and superior performance, compared with those associated with structural and VARMA models.2Brodie and De Kluyver (1987) have reported empirical results in which simple ‘naı̈ve’ market share models (linear extrapolations of past market share values) have produced forecasts as accurate as those derived from structural econometric market share models. Furthermore, the same paper shows that using lagged market share often gives better results than an econometric model, which incorporates marketing mix variables. Indeed, Danaher and Brodie (1992) provided a criterion which determines whether it is advantageous to use marketing mix information for forecasting market shares. The number of parameters to be estimated may be very large in VAR models, particularly in relation to the amount of data that is typically available for business forecasting applications. This lack of parsimony may present serious problems3 when the model is used in a forecasting application. Thus, the use of VAR models often involves the choice of some method for imposing restrictions on the model parameters: the restrictions help to reduce the number of parameters and (or) improve their estimation. One such method, proposed by Litterman (1980), utilises the imposition of stochastic constraints, representing prior information, on the coefficients of the vector autoregression. The resulting models are known as Bayesian Vector Autoregressive (BVAR) models. In the Marketing literature, applications of multiple time series models (Transfer Functions, Intervention and VARMA models) includeIn this paper, we develop a BVAR for the leader of the Portuguese car market for the period 1988:1 throughout 1993:6 using monthly data. The rationale for the choice of a multiple time series technique is two-fold. Structural models of market share, as surveyed in Cooper and Nakanishi (1988), tend to be based on a number of generalisations about the effectiveness and relative importance of advertising, price, and other elements of the mix, with little emphasis being placed on the correct determination of exogenous assumptions and on the appropriate dynamic model specification. Secondly, and presumably in part because of this, the forecasting performance of such models has been poor compared to that of time series models: for such evidence, see Brodie and De Kluyver (1987), Danaher and Brodie (1992), and Brodie and Bonfrer (1994). Out-of-sample one-through 12-months-ahead forecasts are computed for the leader’s market share and their accuracy is evaluated relative to that of forecasts from an unrestricted VAR model and from three best-fitting univariate models.4 The paper is organised as follows. The first section briefly describes the VAR and the BVAR modelling methodologies. The second section describes the database used and the rationale behind the choice of the variables. The third section presents the selected models, the main empirical results, and illustrates the use of impulse response analysis and variance decomposition as a marketing tool in providing information about the competitive dynamics of the market. We conclude with a section on the limitations of our research and possible extensions.