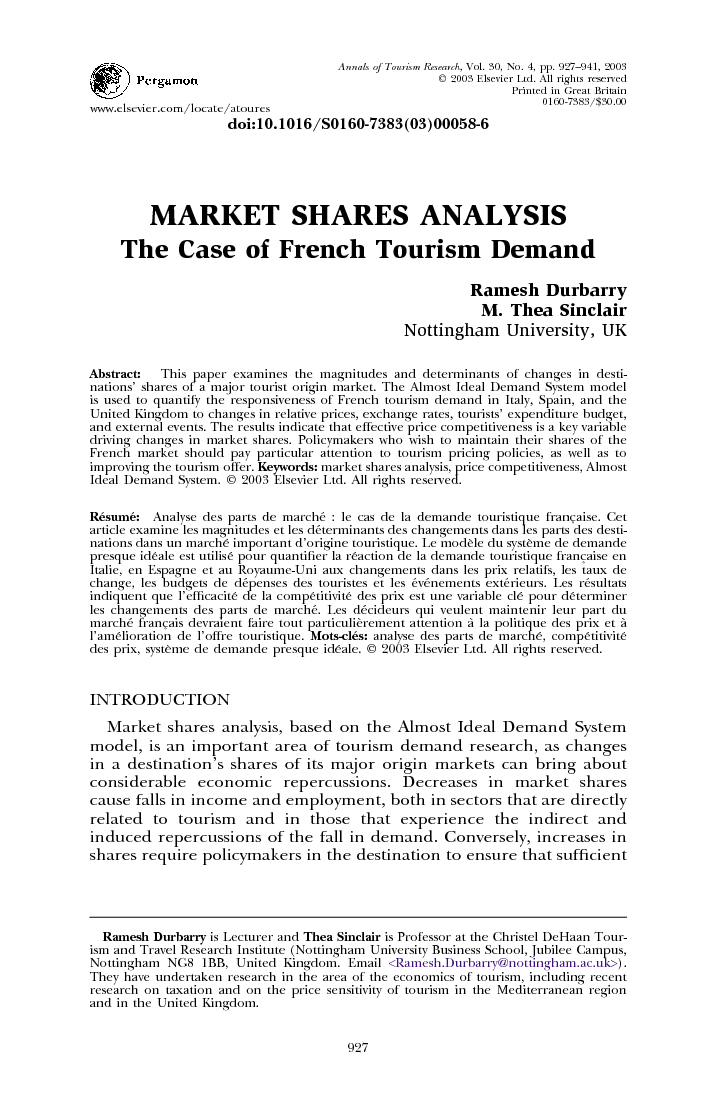 This paper examines the magnitudes and determinants of changes in destinations’ shares of a major tourist origin market. The Almost Ideal Demand System model is used to quantify the responsiveness of French tourism demand in Italy, Spain, and the United Kingdom to changes in relative prices, exchange rates, tourists’ expenditure budget, and external events. The results indicate that effective price competitiveness is a key variable driving changes in market shares. Policymakers who wish to maintain their shares of the French market should pay particular attention to tourism pricing policies, as well as to improving the tourism offer.

Market shares analysis, based on the Almost Ideal Demand System model, is an important area of tourism demand research, as changes in a destination’s shares of its major origin markets can bring about considerable economic repercussions. Decreases in market shares cause falls in income and employment, both in sectors that are directly related to tourism and in those that experience the indirect and induced repercussions of the fall in demand. Conversely, increases in shares require policymakers in the destination to ensure that sufficient capacity is available to meet the rise in demand. The effects are particularly strong when arrivals and expenditure are dominated by demand from a small number of origins, as is the case for many destination countries. Policymakers in countries that experience a decline in their market share are concerned to identify the variables underlying it, with a view to introducing counteractive policies. The Almost Ideal Demand System (AIDS) model provides useful and relevant information in this respect. This paper will explain and demonstrate the ways in which the AIDS model can be used to examine and quantify the responsiveness of destinations’ shares of their major origin markets to changes in economic variables, notably those that can be affected by policymakers: relative prices, exchange rates, and expenditure. Thus, for example, different countries’ monetary authorities formulate policy that affects inflation and exchange rates, the relative price competitiveness of the country, and, hence, tourism demand. Knowledge about the magnitude of these effects is relevant to the choice of policy, particularly in countries where tourism plays a major economic role. Policymakers are also concerned with the extent to which their market shares will change as expenditure by origin country residents grows over time, with a view to identifying any origins that are a source of decline. The information from the model can help them to assess whether a fall is sufficiently great to merit the introduction of offsetting policies. The AIDS model is innovative, as most tourism demand modeling to date has relied on a single equation approach that has been relatively ad hoc, lacking a strong basis in economic theory. Single equation modeling—reviewed by Crouch 1994a, Crouch 1994b and Sinclair and Stabler 1997—has given rise to a disparate set of findings, to which it is difficult to attach a strong degree of confidence. In contrast, the AIDS model consists of a system of equations based on economic theory, whose assumptions can be tested ( Syriopoulos and Sinclair 1993) and which can be estimated by means of the most recent econometric methods ( Song, Romilly and Liu 2000 and Song and Witt 2000). The model can be used at the national level as well as at more disaggregate levels and is well suited to examining demand by countries that provide major sources of tourism for specific destinations. This paper will use the AIDS model to examine French demand for tourism, and Italy, Spain and the United Kingdom’s shares of this market. France is a major tourist origin country and by 2000, the number of its tourists travelling abroad had grown to just over 30 million, with expenditure of approximately $18.4 billion (WTO 2002). Italy, Spain, and the United Kingdom are important destinations for France, accounting for 60% of the total travelling abroad. The paper will explain the ways in which the model can quantify the magnitudes of the changes in market shares that result from changes in the relative prices, exchange rates, and expenditure of the three destination countries, as well as from changes in external events, notably recession and conflict. The implications of the results for policy formation will also be discussed. The paper will examine the pattern of French demand for the different destinations and its evolution over time. The changes in relative prices and exchange rates that affect demand by altering the relative competitiveness of the different destinations will be considered, along with the growth of expenditure over time. To meet this goal, it is necessary to review the literature on the single equation models that have traditionally been used to estimate tourism demand, as well as studies on past AIDS models of demand. The results obtained by using the model to examine French demand for Italy, Spain and the United Kingdom will be discussed and some conclusions and implications for policymaking will be provided.

The AIDS model, examined in the paper, provided measures of the responsiveness of destinations ’ shares of the French market to changes in relative effective prices, tourists ’ expenditure, and external events, notably recession and war. This type of information should be taken into account when policymakers formulate pricing and exchange rate policy, macroeconomic policy that affects income and expenditure, and foreign policy that affects tourist fl ows across borders. Limitations on the availability of time series data precluded analysis of other vari- ables such as transport costs, which have also been excluded from most previous studies, as indicated in the literature review. Nonetheless, the variables included in the model do provide a partial and signi fi cant explanation of changes in market shares (as indicated by the R 2 stat- istic and standard errors included in Table 1 ), with useful information about the responsiveness of demand to economic variables that policy- makers commonly manipulate without reference to tourism. The results obtained from the study indicate that it is changes in relative effective own price competitiveness, rather than in tourists ’ expenditure budget, that are the main drivers of changes in the desti- nation countries ’ shares of the French tourism market. Hence, if policymakers in the different destinations wish to retain or increase their shares of the French market, they should be particularly con- cerned about maintaining or improving their competitiveness relativeto the other destinations. Competitiveness is affected by changes in both exchange rates and relative prices. Although exchange rates are no longer an issue for France, Italy, and Spain in the context of the introduction of the Euro, they remain an important issue for the United Kingdom, which stayed outside the common currency system. The appreciation of sterling in recent years exempli fi es the negative effects on tourism demand that a low level of competitiveness can bring about. Thus, governments should consider the effects of exchange rates not only on manufacturing exports but also on tourism demand when formulating macroeconomic policies that affect the value of their country ’ s currency. Relatively high rates of in fl ation increase tourism prices, with adverse effects on demand, as tourists have some awareness of the differences in the mixes of goods and services that they are able to purchase, in different countries, for a given amount of money. Although the price sensitivities vary somewhat among the different destinations, the calcu- lated values of the own price elasticities are high, ranging between 1.7% and 2.2% for the different countries. Hence, the conse- quences of lax control of in fl ation in each of the different destinations would be a considerable decrease in French demand. Clearly, price competitiveness does matter and policymakers need to keep a keen eye both on aggregate rates of in fl ation at the national and inter- national level and on pricing policies of different types of tourism enterprises at the microeconomic level. Changes in the rates of tax- ation that are levied on tourism enterprises or on tourists themselves, such as changes in the rate of value added tax in different European countries or the introduction of ecotaxes in parts of Spain, are examples of the types of policies that affect relative competitiveness, with wider effects on tourism market shares. The fi nding that demand for Italy, Spain, and the United Kingdom appears less sensitive to changes in the total expenditure budget of French tourists than to changes in effective prices does not imply that policies should be con fi ned to the realm of price competitiveness. Cre- ative thinking by policymakers and business people in the different destinations can indicate possible measures for increasing the sensi- tivity of demand to increases in the expenditure budget. Innovations in the tourism offer, including the provision of new types of attractions or events, as well as improvements in product quality, could help desti- nations to achieve increases in their market share in line with econ- omic growth and rising levels of tourism expenditure. Overall, the study has demonstrated the ways in which market share analysis, based on the AIDS model, can be used to examine different countries ’ shares of a major tourism market. The results provide useful guidance for businesses and policymakers who, otherwise, would have little knowledge about the effects of pricing and exchange rates poli- cies or economic growth on tourism demand for them. The modeling approach used in the study could be applied not only to alternative destinations and resorts but also to a wide range of other contexts. These include, for example, analysis of shares of the conference busi- ness, and demand for events or tourist expenditure on different goods,services, and attractions. Research on these issues would provide results that would assist policy formulation by providing a much fuller range of information upon which decisions could be based