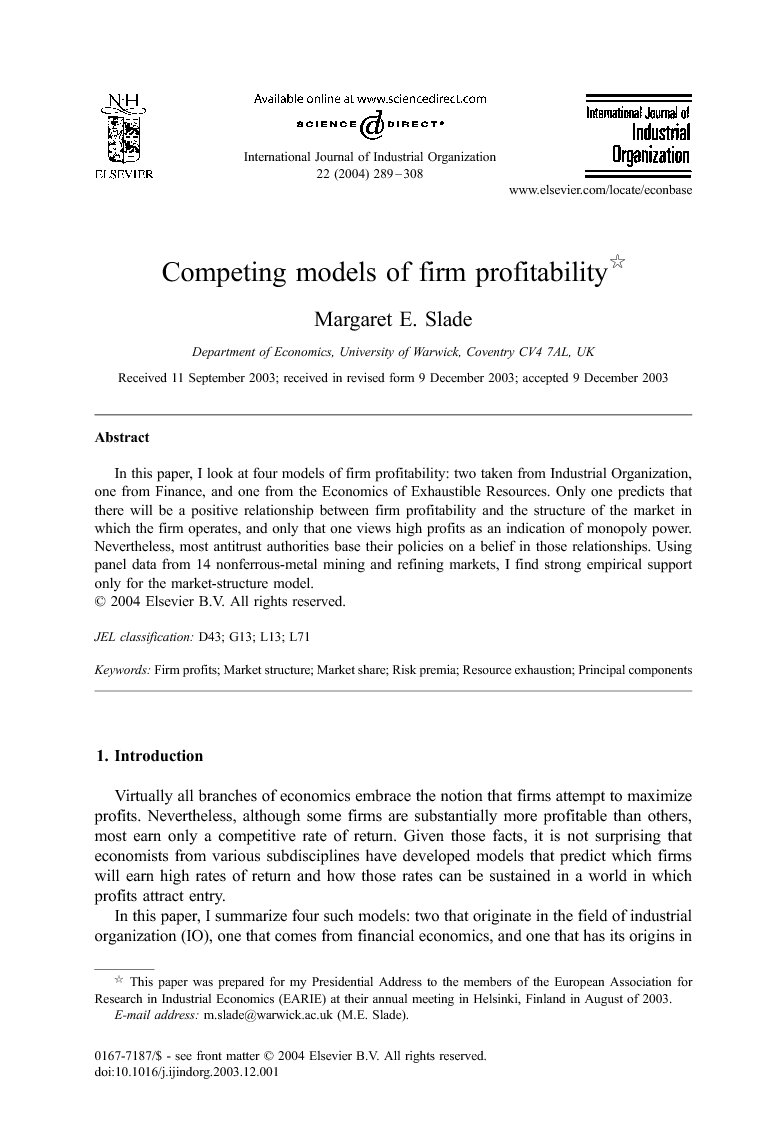 In this paper, I look at four models of firm profitability: two taken from Industrial Organization, one from Finance, and one from the Economics of Exhaustible Resources. Only one predicts that there will be a positive relationship between firm profitability and the structure of the market in which the firm operates, and only that one views high profits as an indication of monopoly power. Nevertheless, most antitrust authorities base their policies on a belief in those relationships. Using panel data from 14 nonferrous-metal mining and refining markets, I find strong empirical support only for the market-structure model.

Virtually all branches of economics embrace the notion that firms attempt to maximize profits. Nevertheless, although some firms are substantially more profitable than others, most earn only a competitive rate of return. Given those facts, it is not surprising that economists from various subdisciplines have developed models that predict which firms will earn high rates of return and how those rates can be sustained in a world in which profits attract entry. In this paper, I summarize four such models: two that originate in the field of industrial organization (IO), one that comes from financial economics, and one that has its origins in the economics of exhaustible resources. Each singles out a different factor as the principal determinant of profitability. In particular, the first emphasizes the structure of the market in which the firm operates, the second points to the firm's share of that market, the third focuses on the firm's risk class, and the last emphasizes resource scarcity and intertemporal arbitrage. The four models of firm profitability originate in traditions that view the economic world in very different lights. Nevertheless, although some are better characterized as searches for empirical regularities, all can be rationalized by economic theory. Only the first, however, predicts a causal relationship between industry concentration and firm profitability. Furthermore, only the first interprets the existence of high profits as evidence of monopoly power. Nevertheless, antitrust agencies in most Western countries implicitly assume that a profits/concentration connection exists. In particular, most agencies require that product and geographic markets be defined and indices of concentration be calculated before any monopolization or merger case can be brought forward.1 This practice is adhered to in spite of the fact that it is not only impossible to prove unambiguously that a causal relationship links profits to concentration,2 but also many theories attribute high profits to superior efficiency, not market power. Given an abundance of theories and predictions, it is natural to turn to data in an attempt to disentangle and assess predicted effects. This exercise is not new. Rather, it is a very old tradition in IO that has fallen out of fashion.3 One reason for the fall from fashion is that it is difficult to move beyond mere correlation to a determination of causality. This difficulty arises because most of the variables that have been used in empirical tests are potentially endogenous. Rather than attempting to determine causality, I take a descriptive approach.4 In particular, I look at equilibrium rather than causal relationships. Those relationships are evaluated by calculating the principal components of a matrix of endogenous variables, interpreting the components that have the highest explanatory power, and assessing how the original variables are related to those components. In other words, I seek to uncover the important relationships—those that explain a large fraction of the cross-sectional and time-series variation in the data. This technique is applied to data from nonferrous-metal mining and refining industries. Those industries produce homogeneous commodities that have well defined product and geographic markets. In particular, 14 commodity markets are examined in the application. The data consist of an unbalanced panel of the principal mining and refining firms and include the production of each of those firms in each market.5 The industries were chosen because they satisfy the assumptions that underlie the theoretical models. In other words, the theories are examined in a context in which the probability that they are valid is high. In particular, accurate market definition is extremely important for assessing models of firm profitability. Indeed, when markets are delineated too broadly or too narrowly, statistical tests are biased against finding relationships between profits, market structure, market share, and market risk. Fortunately, the measures of market structure and market share that are used here are unusually accurate. The industries were also chosen because a number of high-profile mergers between mining firms have been proposed or consummated in recent years (e.g., Alcan/Pechiney). The arguments that favor those mergers rely on alleged efficiencies, moderate horizontal concentration, and the inability of achieving market power when products are homogeneous and are traded in highly liquid commodity-futures markets.6 It is therefore important to assess whether market structure matters in that context. The organization of the paper is as follows. The next section describes the competing models. That description is followed by a discussion of the industries, the data, the empirical model, and the results of the principal-component analysis. Finally, I suggest how one might interpret the findings.

Four models of firm profitability were surveyed, each originating in a different tradition and each focusing on a different determinant of profitability. The first, the familiar structure–conduct–performance (SCP) model, predicts that the structure of the market in which the firm operates will be the most important determinant of its profits. The second predicts that firms with large market shares will be profitable and that failure to condition on market share will bias the results of tests of SCP models. The third singles out a firm’s risk class and predicts that firms that must bear moresystematic risk will earn higher rates of return. Finally, the fourth predicts a temporal increase in profits as the firm’s reserves are depleted and scarcity rents are earned. Although at times mutually contradictory, the predictions from all four models can be rationalized by rigorous theories. The question of what actually determines firm profitability is therefore an empirical issue. Using panel data from nonferrous mining and refining markets, I am able to assess each prediction. I find strong support for the first (SCP) model. Indeed, firms’ profits are positively and significantly related to the structures of their markets, and this relationship holds in all specifications that were estimated. A firm’s market share, in contrast, is found to be uncorrelated with its profitability. This means that, not only is market share not an important determinant of profitability in nonferrous-metal markets, but also that the correlation between market structure and profits is not spurious. A firm’s risk premium, which is a measure of the systematic risk that it must bear, is found to be positively correlated with profitability in mining but not in refining. The latter finding, however, is perhaps due to the fact that in the industries studied, there is not much variation in risk premia across firms and time periods. Finally, there is no evidence of a temporal increase in profits. These empirical regularities are summarized in the last row of Table 1 under the heading of ‘In the Data.’ It is perhaps worth elaborating on the second finding. It is somewhat surprising that market share does not affect profitability in these industries. In particular, since low-cost firms should expand more in an upturn and contract less in a downturn, most economic models predict that size, even when not the principal determinant of profitability, will be positively correlated with it. My counterintuitive finding can be explained, however, if some firms are capacity constrained while others are not. Under that hypothesis, output expansions will be undertaken by the unconstrained firms, which need not be the low- marginal-cost firms. Furthermore, this is not just a short-run phenomenon since, in exhaustible-resource industries, capacities are more apt to be determined by reserves than by marginal costs. I began by stating that competition authorities rely heavily on concentration indices as tools for determining potential competitive harm. The issue of whether this practice is justified is clearly not resolved. Most economists would agree, however, that it does not work well when products are differentiated. For this reason, authorities are starting to supplement the conventional analysis with merger simulations and other more sophisti- cated evaluation methods. This practice, however, is also problematic. For example, the results of merger simulations are sensitive to the choice of functional form for demand equations. Furthermore, the predictions that are obtained depend heavily on the cross-price elasticities that are used. Unfortunately, the magnitudes of estimated elasticities are sensitive to the choice of the outside good as well as to the number of alternatives considered. 34 When products are homogeneous, shares may thus be as good indicators as simulations. It is therefore unlikely that the traditional approach will be totally abandoned in the near future