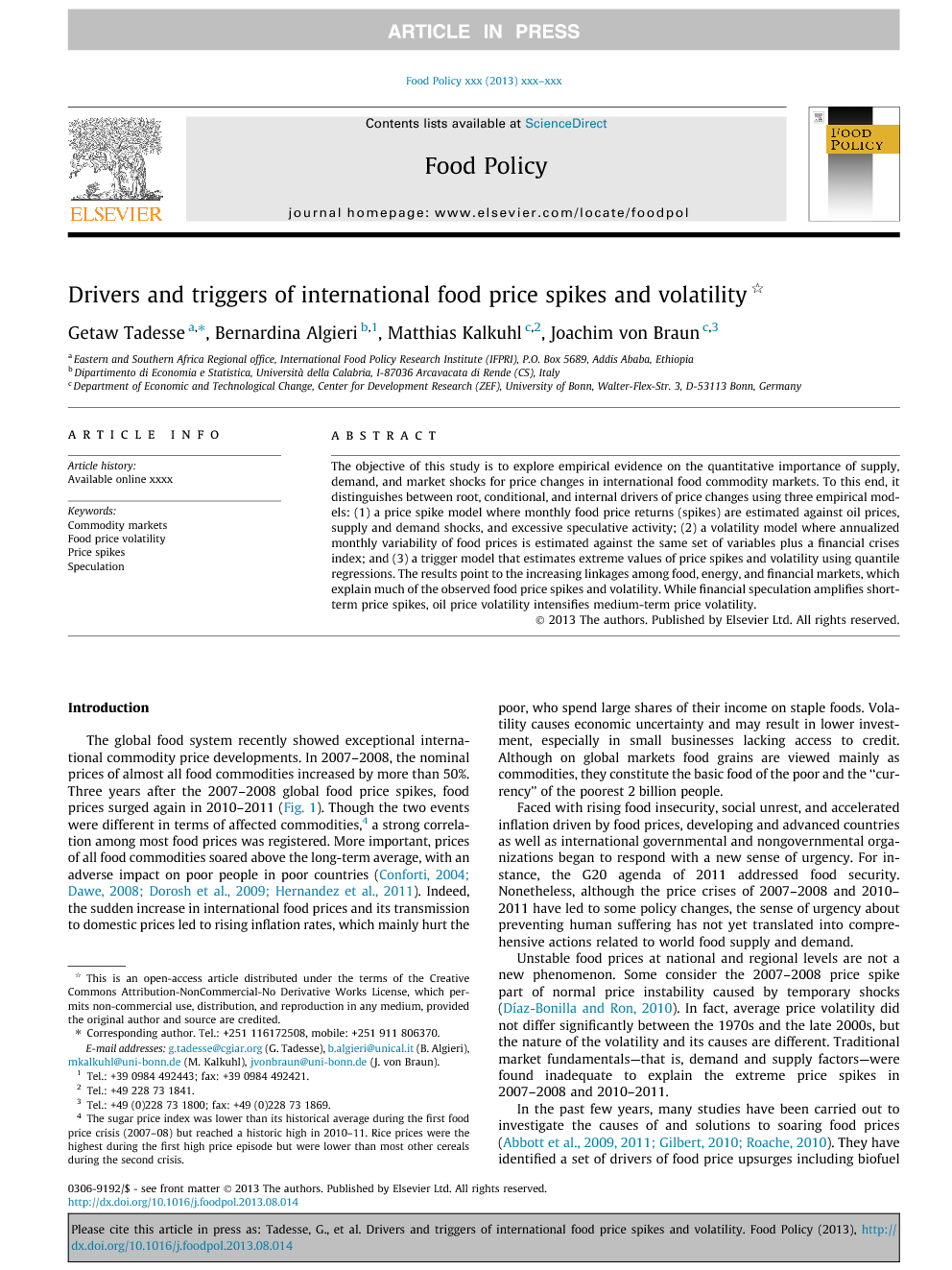 The objective of this study is to explore empirical evidence on the quantitative importance of supply, demand, and market shocks for price changes in international food commodity markets. To this end, it distinguishes between root, conditional, and internal drivers of price changes using three empirical models: (1) a price spike model where monthly food price returns (spikes) are estimated against oil prices, supply and demand shocks, and excessive speculative activity; (2) a volatility model where annualized monthly variability of food prices is estimated against the same set of variables plus a financial crises index; and (3) a trigger model that estimates extreme values of price spikes and volatility using quantile regressions. The results point to the increasing linkages among food, energy, and financial markets, which explain much of the observed food price spikes and volatility. While financial speculation amplifies short-term price spikes, oil price volatility intensifies medium-term price volatility.

The global food system recently showed exceptional international commodity price developments. In 2007–2008, the nominal prices of almost all food commodities increased by more than 50%. Three years after the 2007–2008 global food price spikes, food prices surged again in 2010–2011 (Fig. 1). Though the two events were different in terms of affected commodities,4 a strong correlation among most food prices was registered. More important, prices of all food commodities soared above the long-term average, with an adverse impact on poor people in poor countries (Conforti, 2004, Dawe, 2008, Dorosh et al., 2009 and Hernandez et al., 2011). Indeed, the sudden increase in international food prices and its transmission to domestic prices led to rising inflation rates, which mainly hurt the poor, who spend large shares of their income on staple foods. Volatility causes economic uncertainty and may result in lower investment, especially in small businesses lacking access to credit. Although on global markets food grains are viewed mainly as commodities, they constitute the basic food of the poor and the “currency” of the poorest 2 billion people.Faced with rising food insecurity, social unrest, and accelerated inflation driven by food prices, developing and advanced countries as well as international governmental and nongovernmental organizations began to respond with a new sense of urgency. For instance, the G20 agenda of 2011 addressed food security. Nonetheless, although the price crises of 2007–2008 and 2010–2011 have led to some policy changes, the sense of urgency about preventing human suffering has not yet translated into comprehensive actions related to world food supply and demand. Unstable food prices at national and regional levels are not a new phenomenon. Some consider the 2007–2008 price spike part of normal price instability caused by temporary shocks (Díaz-Bonilla and Ron, 2010). In fact, average price volatility did not differ significantly between the 1970s and the late 2000s, but the nature of the volatility and its causes are different. Traditional market fundamentals—that is, demand and supply factors—were found inadequate to explain the extreme price spikes in 2007–2008 and 2010–2011. In the past few years, many studies have been carried out to investigate the causes of and solutions to soaring food prices (Abbott et al., 2009, Abbott et al., 2011, Gilbert, 2010 and Roache, 2010). They have identified a set of drivers of food price upsurges including biofuel demand, speculation in commodity futures markets, countries’ aggressive stockpiling policies, trade restrictions, macroeconomic shocks to money supply, exchange rates, and economic growth. The relative importance and actual impact of these causes have been widely discussed. While there is a certain consensus regarding the effects of weather, biofuel production, and export restrictions on food commodity markets, the dispute surrounding speculation is far from settled. Most of the empirical studies focus primarily on Granger causality tests to explain the role of speculation in price returns or volatility (Irwin et al., 2009, Robles et al., 2009 and Gilbert, 2010). Another strand of research seeks to identify bubble behavior—that is, explosive increases in prices—in commodity markets during 2007–2008 (Gilbert, 2009, Phillips and Yu, 2011 and Shi and Arora, 2012). Granger causality tests, however, are criticized for presuming a time-lag structure that might be too long to allow for observing any reaction of liquid financial markets (Gilbert and Pfuderer, 2012 and Grosche, 2012). Analysis of bubbles can identify abnormal price behavior but does not explain the causes of the observed price increases. This study goes a step further by examining the impact of speculation and agricultural fundamentals on price spikes and volatility, where price spikes are the short-term ups and downs of prices following short-term shocks and volatility is the variability of price around its trend. The distinction between price spikes and volatility is more important from a welfare perspective than trends in overall price levels because price spikes and volatility are the primary indicators of food crises.5 Furthermore, this distinction is also essential to differentiate among factors that generate risks for poor consumers to cope, and uncertainties for agricultural investors to plan. We argue that a food crisis is more closely related to extreme price spikes, while long-term volatility is more strongly connected to general price risks. In particular, this study provides empirical evidence on the quantitative importance of widely discussed determinants of commodity prices. In our empirical analysis, we consider agricultural supply shocks, stock-to-use ratios, demand shocks (energy prices and gross domestic product [GDP]), and futures market shocks (speculative activity in commodity futures trading and financial crises). The empirical analysis is carried out using three models: (1) a price spike model where monthly food price returns (spikes) are estimated against oil prices, supply shocks, stock-to-use ratios, demand shocks, and volume of speculative futures trading; (2) a volatility model where annualized monthly variability of food prices is estimated against yearly observable variables such as supply shocks, stock-to-use ratios, economic growth, volume of speculative futures trading, oil price volatility, and a financial crises index; and (3) a trigger model that estimates extreme values of price spikes and volatility using quantile regressions. The adopted methodology will allow us to shed light on the formation of price spikes and price risks rather than simply so-called “high food prices.” The food commodity prices under investigation are for wheat, maize, and soybeans.6 The rest of the paper is organized as follows: Section ‘Conceptual framework’ presents the conceptual framework of the approach. Sections ‘Estimation methods’ and ‘Data’ describe the setup of the adopted models and the variables included in the empirical analysis. Section ‘Results and discussion’ discusses the econometric results. Section ‘Conclusion’ concludes.

This study has investigated the main drivers of food price spikes and volatility for wheat, maize, and soybeans, and shown how these factors trigger crisis at extreme price changes. The analysis has indicated that exogenous shocks as well as the linkages between food, energy, and financial markets play a significant role in explaining food price volatility and spikes. In addition to demand and supply shocks, speculation is an important factor in explaining and triggering extreme price spikes. Excessive speculation is more strongly associated with price spikes at extreme positive price changes than with negative price changes, implying that the stabilizing effect of speculation through price discovery is smaller than its destabilizing effect through creating market bubbles. The results also confirm that supply shocks are reflected in price spikes and that the effect of oil price shocks is greater for price risk than for food crisis. The effect of oil prices on food price spikes has emerged as significant only in recent years. Financial crisis exerts a strong impact on food price volatility, which confirms the increasing link between financial and commodity markets. On the basis of the empirical results, it seems opportune for policy makers to prevent excessive speculative behaviors in the commodity market in order to reduce price spikes and prevent short-term food crises. In this context, caps on trading under extreme market situations, or taxation of food commodity futures trading along the lines of the Tobin tax, could be framed. Designing flexible biofuel policies that are responsive to the food supply situation can also help stabilize prices and reduce volatility spillovers from oil markets in times of food crisis. Recent changes in the US biofuel mandate, for example, include flexibility mechanisms that allow for relaxing the blending requirement in one year if compensated in another year. Improving the market information base would further help all market actors to form expectations based on fundamentals and to detect shortages early. While the Agricultural Market Information System (AMIS) initiative of the G20 strives for higher transparency, sufficient contributions from some member states are still lacking. Recent developments in many countries to increase national grain stocks to reduce volatility and import dependency lead to increased grain scarcity and thus higher prices in the short run. International levels of storage are, however, only one option to reduce volatility, which turned out to be mostly insignificant in our analyses. One reason might be lack of cooperation: governments building stocks only for their citizens tend to complement storage policies with trade restrictions, which effectively withdraw their stocks from the global grain market. Such collective action failure needs to be addressed in regional and global trade talks that should also consider the international consequences of national stockholding policies. Besides policies to reduce volatility and extreme price spikes, governments can increase resilience of producers and consumers to deal with price changes. This can be done by supporting contract farming and price insurance mechanisms on the production side and by enhancing safety nets and access to financial services on the consumer side. Governments and their international associations such as the G20 should therefore carefully analyze all available options for preventing food price spikes and volatility—from interventions in financial markets to biofuel policies—and they should also facilitate market information.