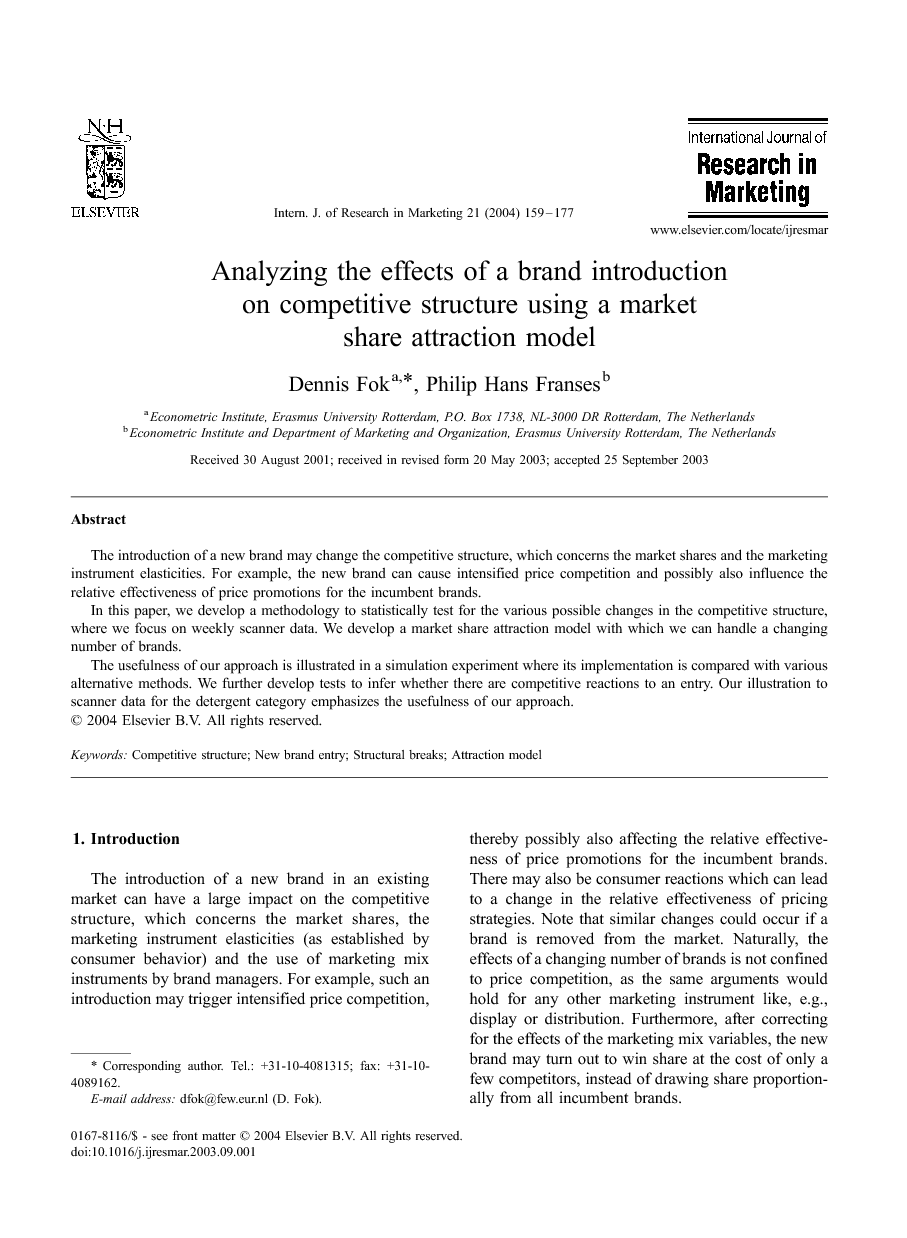 The introduction of a new brand may change the competitive structure, which concerns the market shares and the marketing instrument elasticities. For example, the new brand can cause intensified price competition and possibly also influence the relative effectiveness of price promotions for the incumbent brands. In this paper, we develop a methodology to statistically test for the various possible changes in the competitive structure, where we focus on weekly scanner data. We develop a market share attraction model with which we can handle a changing number of brands. The usefulness of our approach is illustrated in a simulation experiment where its implementation is compared with various alternative methods. We further develop tests to infer whether there are competitive reactions to an entry. Our illustration to scanner data for the detergent category emphasizes the usefulness of our approach.

In this paper, we proposed methods to empiri- cally analyze the effects of a brand introduction on the competitive structure, where we focus on week- ly observed market shares and marketing instru- ments. We suggested a number of statistical teststhat can be used to judge whether or not the brand introduction affects the competitive structure among incumbent brands. Tests for the constancy of the marketing strategies themselves were also presented. If incumbent brands respond to the introduction by means of increased promotion or price cuts, the market shares of different brands might change, but this does not automatically imply that the compet- itive structure changes. Hence, we argued that only changes in elasticities or cross-elasticities corre- spond to a structural change in the competitive structure. To be able to statistically test for these kinds of structural breaks, we developed a model for compe- tition in which the preintroduction and postintroduc- tion periods can be estimated simultaneously. In this paper, we choose to relate competition to market shares. The familiar market share attraction model can then be used as a basis for the two-period model. In such a model, we can allow for all kinds of different structural changes. Furthermore, we have shown that various alternative methods that ignore some of the technicalities involved with this testing approach do not perform as good as the method we have proposed. In the illustration, we stressed the importance of jointly estimating the two periods by showing that at least some part of the competitive structure remains unchanged. If all available data are used, these constant parameters can be estimated more accurate- ly. For our illustrative data set, we do not find supportive evidence for the hypothesis that prices decrease after an introduction, as has been suggested in game-theoretic studies. An explanation for this could be that the reaction of consumers to the introduction is ignored in these studies. Another explanation could be that brand managers do not respond optimallyThe methodology presented in this paper can be used to examine the consequences of brand introduc- tion on competitive structure. Future empirical work should indicate whether generalizing statements can be made about this issue.