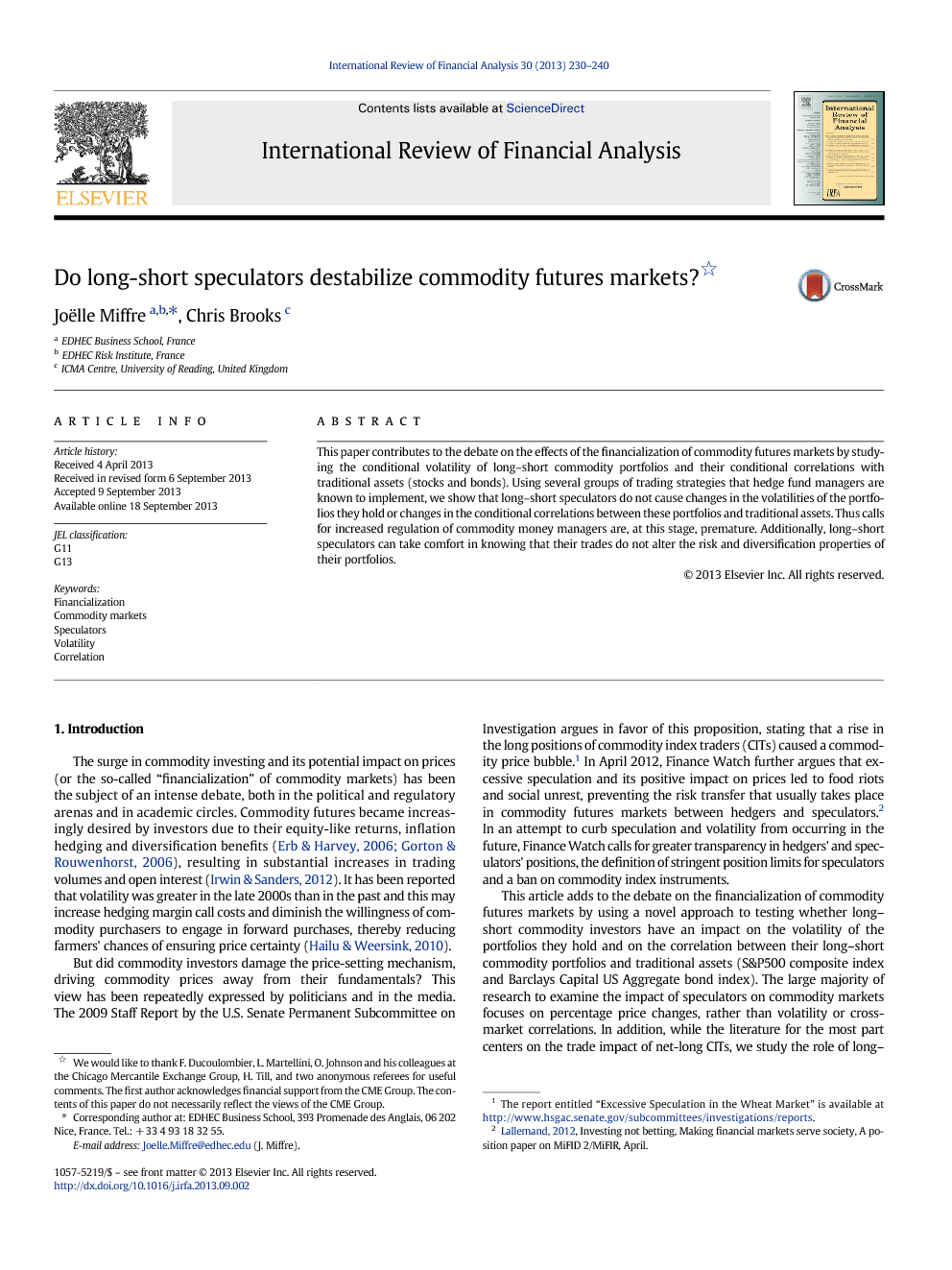 This paper contributes to the debate on the effects of the financialization of commodity futures markets by studying the conditional volatility of long–short commodity portfolios and their conditional correlations with traditional assets (stocks and bonds). Using several groups of trading strategies that hedge fund managers are known to implement, we show that long–short speculators do not cause changes in the volatilities of the portfolios they hold or changes in the conditional correlations between these portfolios and traditional assets. Thus calls for increased regulation of commodity money managers are, at this stage, premature. Additionally, long–short speculators can take comfort in knowing that their trades do not alter the risk and diversification properties of their portfolios.

The surge in commodity investing and its potential impact on prices (or the so-called “financialization” of commodity markets) has been the subject of an intense debate, both in the political and regulatory arenas and in academic circles. Commodity futures became increasingly desired by investors due to their equity-like returns, inflation hedging and diversification benefits (Erb and Harvey, 2006 and Gorton and Rouwenhorst, 2006), resulting in substantial increases in trading volumes and open interest (Irwin & Sanders, 2012). It has been reported that volatility was greater in the late 2000s than in the past and this may increase hedging margin call costs and diminish the willingness of commodity purchasers to engage in forward purchases, thereby reducing farmers' chances of ensuring price certainty (Hailu & Weersink, 2010). But did commodity investors damage the price-setting mechanism, driving commodity prices away from their fundamentals? This view has been repeatedly expressed by politicians and in the media. The 2009 Staff Report by the U.S. Senate Permanent Subcommittee on Investigation argues in favor of this proposition, stating that a rise in the long positions of commodity index traders (CITs) caused a commodity price bubble.1 In April 2012, Finance Watch further argues that excessive speculation and its positive impact on prices led to food riots and social unrest, preventing the risk transfer that usually takes place in commodity futures markets between hedgers and speculators.2 In an attempt to curb speculation and volatility from occurring in the future, Finance Watch calls for greater transparency in hedgers' and speculators' positions, the definition of stringent position limits for speculators and a ban on commodity index instruments. This article adds to the debate on the financialization of commodity futures markets by using a novel approach to testing whether long–short commodity investors have an impact on the volatility of the portfolios they hold and on the correlation between their long–short commodity portfolios and traditional assets (S&P500 composite index and Barclays Capital US Aggregate bond index). The large majority of research to examine the impact of speculators on commodity markets focuses on percentage price changes, rather than volatility or cross-market correlations. In addition, while the literature for the most part centers on the trade impact of net-long CITs, we study the role of long–short traders (such as commodity trading advisors (CTAs) or more generally hedge funds), a topic that is solely addressed in Büyükşahin and Robe (2010) and Brunetti, Büyükşahin, and Harris (2011). The novelty of our approach relative to these two articles comes from the fact that we use a battery of strategies that hedge funds are known to follow (such as momentum and term structure investing) and then test the proposition that the trading of these long–short speculators Granger-causes (see Granger, 1969) a change in the volatility of their portfolios or a change in cross-market correlations. To our knowledge we are the first to examine such strategies in the context of their impact on commodity market price variability and correlations. Another advantage of our approach is that, relative to previous studies, it enables us to employ a much larger cross section over a longer time span. We are also able to test the hypothesis that long–short investors may be destroying through their actions the very risk diversification they sought out in the first instance. A finding that long–short commodity traders increase volatility and cross-market linkages could also legitimate popular claims for increased regulation. Our results indicate that speculators have no significant impact on volatility or cross-market correlation. This conclusion holds irrespective of whether speculators are labeled as “non-commercial” in the CFTC (Commodity Futures Trading Commission) Commitment of Traders (COT) report or “professional money managers” (i.e., CTAs, commodity pool operators (CPOs) and hedge funds) in the CFTC disaggregated COT report. It follows that calls for increased regulation of commodity money managers are, at this stage, premature: they are unlikely to prevent volatility from rising again in the future. Our results also indicate that long–short managers can take comfort in the knowledge that their trades do not distort volatility and correlation and thus do not alter the risk and diversification properties of their portfolios. The remainder of this paper is structured as follows. Section 2 sets up the debate on the financialization of commodity futures markets from an academic perspective. Section 3 presents the dataset we use. Section 4 introduces the methodologies employed to capture the returns earned by long–short speculators in commodity futures markets, the conditional volatility of their portfolios and the conditional correlation between their returns and traditional assets. Section 4 also highlights the methodology used to test whether changes in the positions of speculators Granger-cause changes in conditional volatility or in conditional correlations. Section 5 discusses our results and finally section 6 concludes.

This paper mimics the trading behavior of long–short commodity market participants using a battery of strategies that they are known to follow and tests whether their trading activities have an impact on the volatility of the commodity portfolios they hold or on cross-market correlations. If the presence of long–short commodity speculators is detrimental to the functioning of commodity markets, their trading should Granger-cause a change in the volatility of their portfolios and/or a change in the conditional correlation between their commodity portfolios and traditional assets. This would be a source of concern not only to regulators but to CTAs managers themselves as they would then destroy the very diversification benefits that they sought in the first instance. Our results find no support for the hypothesis that speculators destabilized commodity prices by increasing volatility or co-movements with traditional assets. Interestingly, this conclusion holds irrespective of whether speculators are labeled as “non-commercial” in the CFTC Commitment of Traders report or as “professional money managers” (i.e., CTAs, CPOs and hedge funds) in the CFTC disaggregated Commitment of Traders report. Thus, long–short speculators can take comfort in knowing that their trades do not alter the risk and diversification properties of their portfolios. It also follows fromthe analysis presented here that there is no need for concern relating to the participation of professional money managers in commodity futures markets. If we are looking for the causes of changes in commodity price instability, it seems that we must look elsewhere — and in particular at the fundamental drivers of commodity prices related to global current and expected future growth rates. Instead, it is important to devote more resources to collecting and analyzing inventory data worldwide as this information might be crucial in supporting an understanding of the drivers of volatility in commodity markets which are well rooted in the forces of supply and demand. While the media and governments courting popular opinion have called for an increase in the regulation of commodity speculators, our research adds to an emerging consensus that speculators do not have a damaging impact on the functioning of commodity markets. There are also concerns that introducing such unnecessary regulation could in itself be damaging. Sanders and Irwin (2011b) argue that attempts to curb speculative activities could reduce market liquidity and depth, and could increase risk premia and hedging costs. It may also lead to the development of “off-shore” trading in less regulated jurisdictions or push traders to cash markets where the impacts on the prices of commodities faced by end consumers would be more direct.