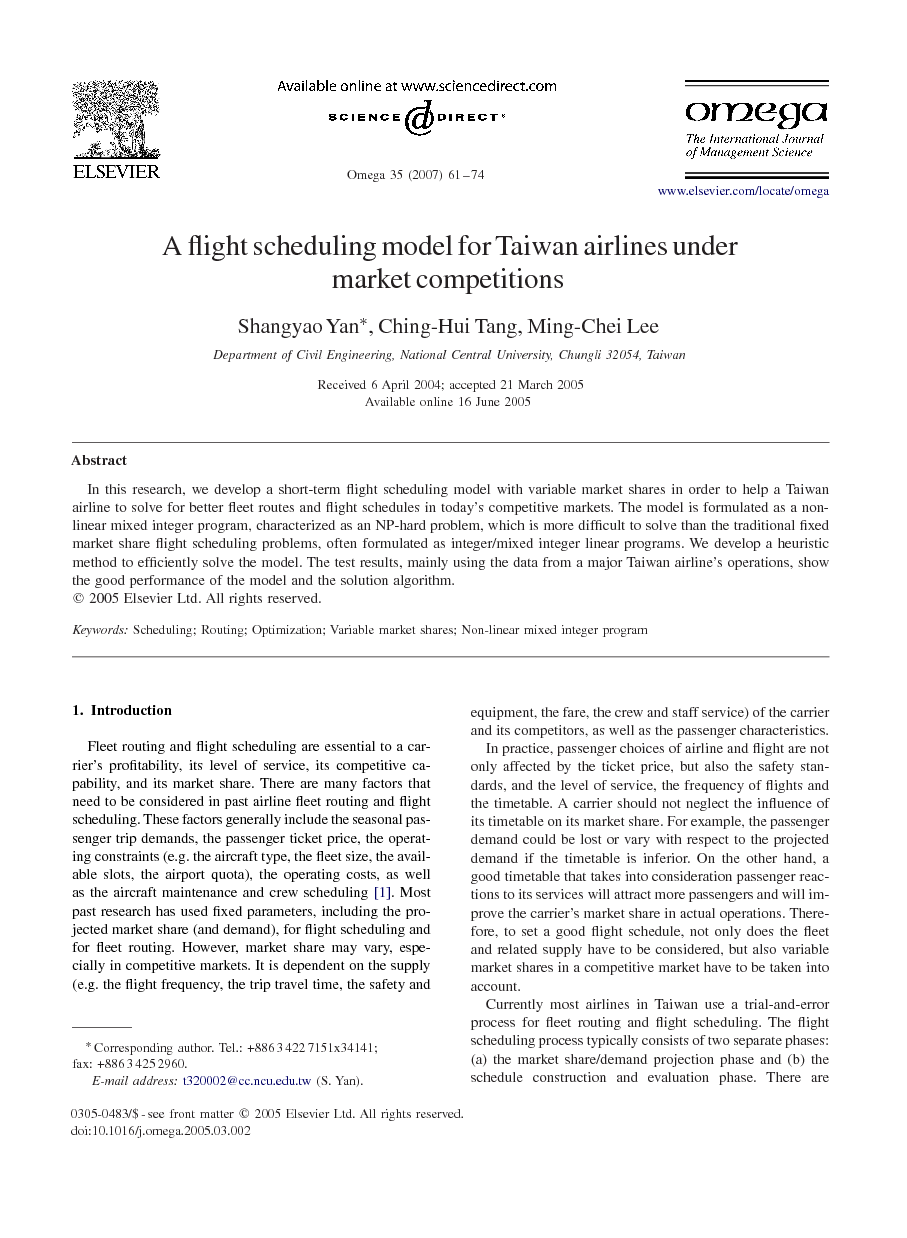 In this research, we develop a short-term flight scheduling model with variable market shares in order to help a Taiwan airline to solve for better fleet routes and flight schedules in today's competitive markets. The model is formulated as a non-linear mixed integer program, characterized as an NP-hard problem, which is more difficult to solve than the traditional fixed market share flight scheduling problems, often formulated as integer/mixed integer linear programs. We develop a heuristic method to efficiently solve the model. The test results, mainly using the data from a major Taiwan airline's operations, show the good performance of the model and the solution algorithm.

The research that has made the most valuable contribution to fleet routing and flight scheduling is the development of a new scheduling model capable of incorporating passenger choice behavior in competitive markets. In order to solve the proposed model, which is formulated as a non-linear mixed integer program and is more difficult to solve than the conventional flight scheduling problems, we develop anefficient solution algorithm. The new modeling approach and solution algorithm are expected to help airlines more efficiently determine their flight schedules and fleet routes in competitive markets. Numerical tests, including four cases utilizing data from a major Taiwan airline’s operations with reasonable sim- plifications, are performed to evaluate the adequacy of the model and the solution algorithm. The test results show that the heuristic solutions obtained in this research were very close to the optimal solution for VMSFSM. In addition, a comparison of the VMSFSM and FMSFSM results indicated that VMSFSM was a significant improvement over FMS- FSM, and could be useful for carriers in real operations. In the testing process, several sensitivity analyses demon- strated the flexibility of the model, showing that it could be useful in actual operations. Although the preliminary test results show that the model and the solution algorithm are potentially useful for solving medium scale problems, especially for the domestic Taiwan market, more testing and case studies should be conducted, so that the effectiveness of the model and its limitations may be better grasped. The model and the solution algorithm can be suitably modified to solve larger-scale problems, or for multi-fleet routing and multi-stop flight scheduling. If the proposed solution algorithm cannot efficiently solve large- scale problems, then modern meta-heuristic techniques (e.g. the tabu search method, threshold accepting method, or ge- netic algorithm), column generation or lagrangian relax- ation, may be incorporated or employed to develop a more efficient algorithm. This could be a direction of future re- search. Moreover, for other markets different from current Taiwan market conditions, where the target airline cannot predict competitor services, the proposed model should be useful as a basic tool. The incorporation of game theory to solve for services could be a direction of future research. The passenger choice model and its related factors and pa- rameters may be suitably modified, for according to their own market characteristics. Modification and testing of the model could also be directions for future research