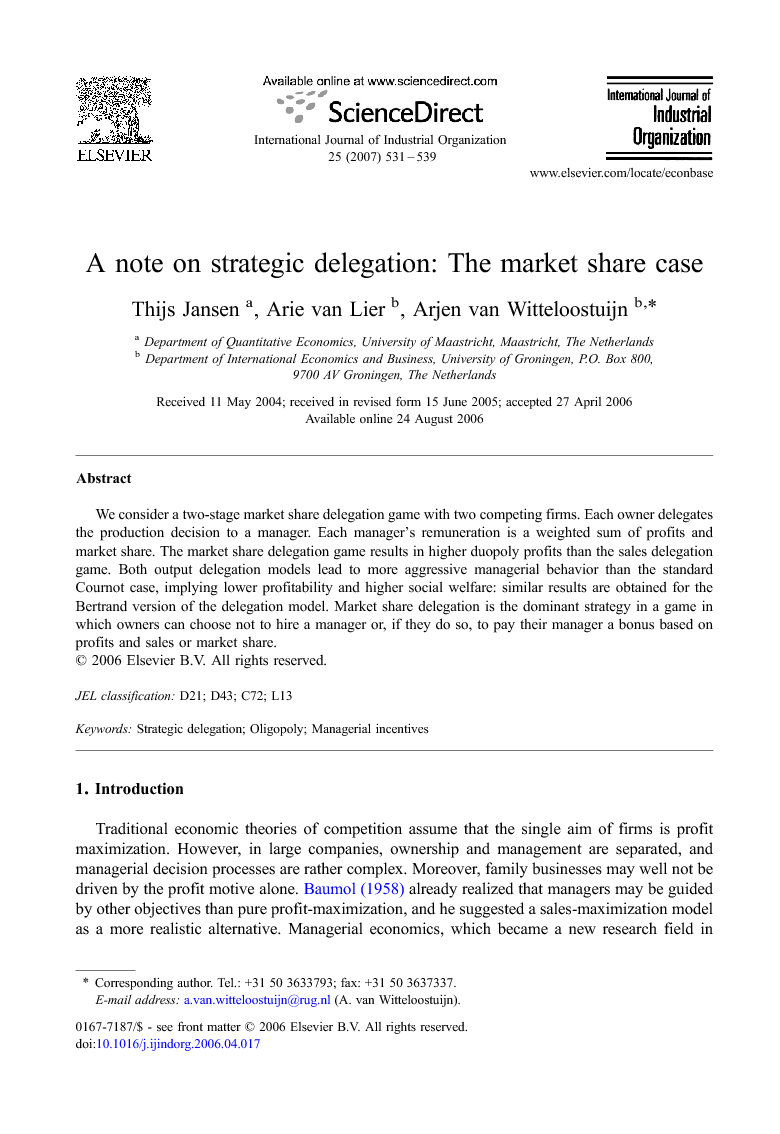 Traditional economic theories of competition assume that the single aim of firms is profit maximization. However, in large companies, ownership and management are separated, and managerial decision processes are rather complex. Moreover, family businesses may well not be driven by the profit motive alone. Baumol (1958) already realized that managers may be guided by other objectives than pure profit-maximization, and he suggested a sales-maximization model as a more realistic alternative. Managerial economics, which became a new research field in economics, focused on this issue of managerial motives. Hall (1967) and Lackman and Craycroft (1974) are two early managerial economics studies that supported the sales-maximization hypothesis empirically by directly estimating managers' objectives. In a similar vein, market share rather than absolute sales may provide a crucial motive for managers. Peck (1988) reports the empirical findings of a survey on corporate objectives among 1000 American and 1031 Japanese top managers. Increasing market share ranked third in the American and second in the Japanese samples, whereas return on investment was first among American and third among Japanese top managers. Borkowski (1999) analyzes differences in international managerial performance evaluation on the basis of questionnaire data from 261 firms in five countries (Canada, Germany, Japan, United Kingdom and the United States) and found that market share often emerged as important. The market share criterion is ranked second for home and foreign-based managers of US firms with subsidiaries in Japan (cf. Gray, 1995). The strategic use of managers' contracts in competition games was introduced in the 1980s by the path-breaking papers of Vickers (1985), Fershtman (1985), Fershtman and Judd (1987), and Sklivas (1987), VFJS for short. These contributions offer a game-theoretic explanation for managers' nonprofit-maximizing behavior. VFJS consider the separation of owners (principals) and managers (agents), and examine a two-stage game, where in the first stage (the ‘contract stage’) the owner writes his manager's contract, which is publicly announced, before competition evolves in the second stage. In all these models, according to the contract, managers receive a bonus which is proportional to a (linear) combination of profits and output1. In the consecutive stage (the ‘market stage’), firms' managers decide on output, using the utility function directed by the contract, because their compensation depends on it. In this paper, we examine the market share version of these delegation games. For quantity competition with linear contracts and common constant marginal costs — the case of price competition is only briefly examined below — we prove that these two-stage games possess a unique symmetric subgame-perfect equilibrium, both for duopoly and n-firm cases. Furthermore, we consider duopoly games in which the contracts of the managers are different: one of them is rewarded on the basis of a combination of profits and sales (sales delegation) or profits alone (standard Cournot, or no delegation), and the other on the basis of a combination of profits and market share (market share delegation). We compare our market share delegation results concerning profits and welfare with those for the sales delegation and the standard Cournot case. Finally, we argue that hiring a manager and rewarding him on the basis of a combination of profits and market share dominates both sales delegation and standard Cournot profit maximization.

We explored strategic delegation games with a market share bonus. Each owner seeks to direct his manager to more aggressive behavior by attributing a positive weight to themarket share component in the bonus scheme. More aggressive managerial behavior gives higher market output and higher social welfare in comparison with the standard Cournot case. Total market output is somewhat more restricted in the market share delegation game, resulting in 9.5% higher duopoly profits compared with the sales delegation case. Similar results are obtained in the Bertrand version of the model. The property of higher profitability still holds in the case of an n -firm oligopoly, although the effect is less pronounced if n increases. Market share delegation is the dominant strategy in asymmetric duopoly dele- gation games. That is, in the face of a no-delegation or a sales-delegation rival, an owner maximizes his profits by attributing a positive weight to market share in his manager's bonus scheme.