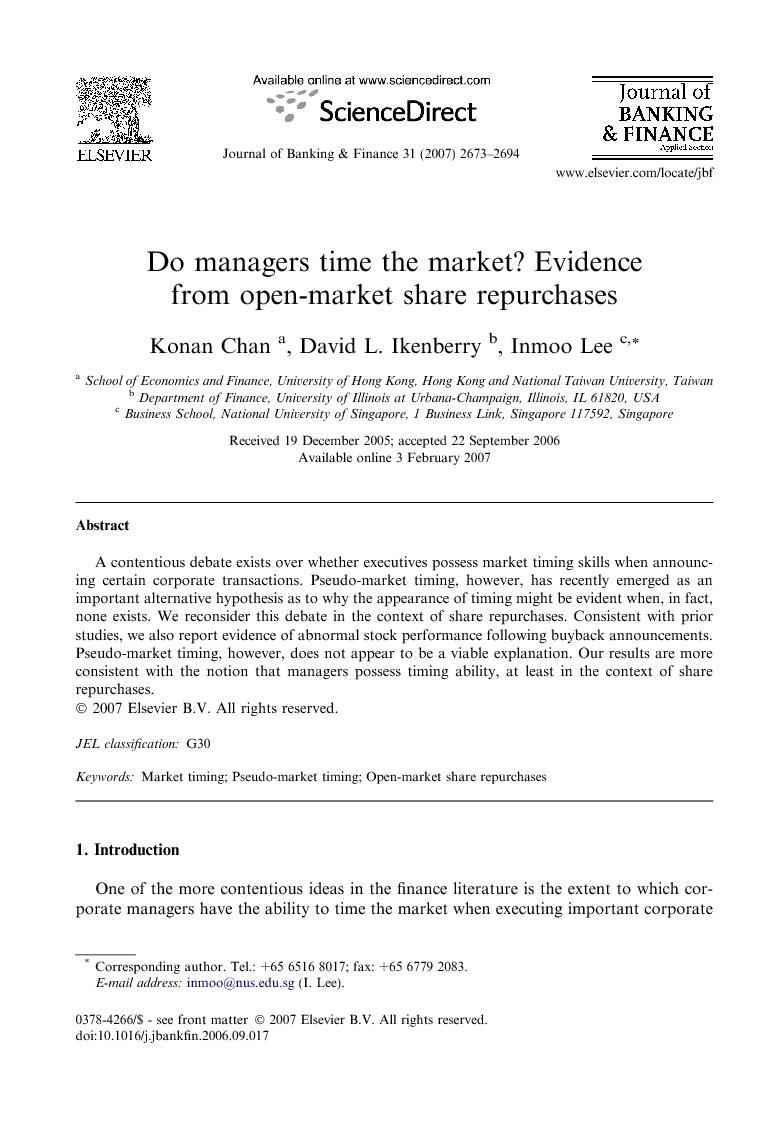 A contentious debate exists over whether executives possess market timing skills when announcing certain corporate transactions. Pseudo-market timing, however, has recently emerged as an important alternative hypothesis as to why the appearance of timing might be evident when, in fact, none exists. We reconsider this debate in the context of share repurchases. Consistent with prior studies, we also report evidence of abnormal stock performance following buyback announcements. Pseudo-market timing, however, does not appear to be a viable explanation. Our results are more consistent with the notion that managers possess timing ability, at least in the context of share repurchases.

A controversial literature has developed as to whether managers initiate certain corpo- rate actions to take advantage of windows of mis-pricing and, further, whether the stock market is slow to adapt to this information. The list of transactions is long and includes, for example, dividend initiations, exchange listings, stock splits and mergers. Recently, pseudo-market timing has been suggested as an innocent explanation as to why researchers might draw the conclusion of market timing ability when, in fact, none might exist. Such a situation casts a completely different light on an otherwise rich litera- ture which finds economically material and statistically significant long-horizon return drifts. We offer an extensive examination of the long-horizon evidence following share repur- chase announcements and revisit this idea as to whether managers are knowingly aware of mis-pricing and are able to time the market. Further, we estimate the extent to which pseudo-market timing explains at least some portion of the long-run return performance of buyback firms using a sample of 5508 programs announced by US firms between 1980 and 1996.Pseudo-market timing is predicated on a dependency in announcement behavior with past market performance. We check this key underlying characteristic and find the evi- dence weak. While there are fewer repurchases announced following bull markets, we do not find pervasive evidence of buyback announcements following bearish markets. This result is inconsistent with a critical premise of the pseudo-market timing story. We also compare calendar- and event-time methods to estimate long-horizon abnormal return performance. If pseudo-market timing is driving the abnormal performance we observe as researchers by using an event-time method, such performance will not occur once we control for any dependency in announcements. Yet using a calendar-time approach, we still observe significant outperformance; changes in the alpha point estimates between calendar- and event-time methods suggest that pseudo-market timing can explain, at best, only a small portion of the buyback return drift. When we examine manager behavior using actual buyback activity, the evidence is seemingly consistent with managers possessing some timing ability. In sum, the evidence presented here does not support pseudo-market timing as a viable explanation for the positive long-term abnormal stock return drift observed, on average, in buyback firms; instead, the evidence is more consist with the notion that managers pos- sess market timing abilities when announcing and executing buyback decisions.