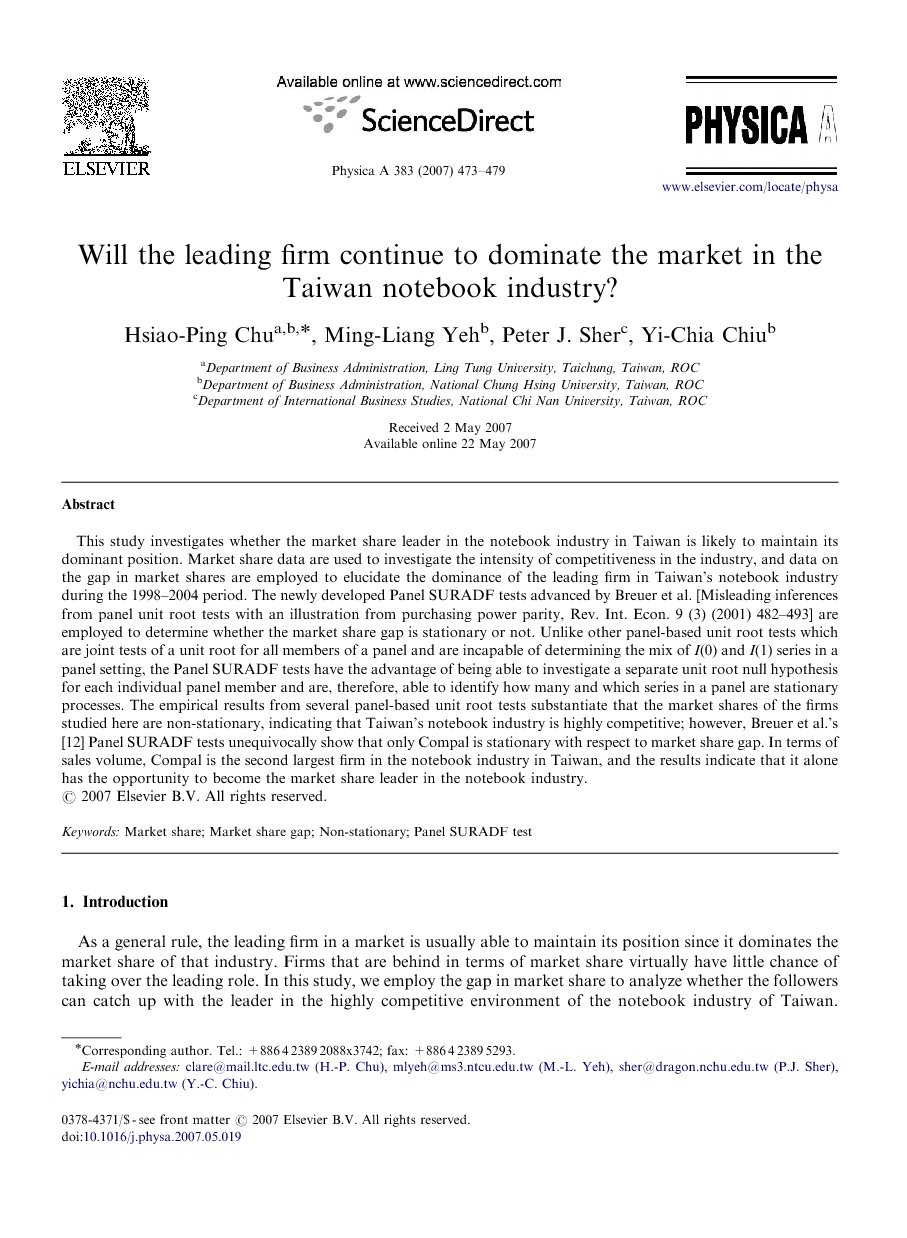 This study investigates whether the market share leader in the notebook industry in Taiwan is likely to maintain its dominant position. Market share data are used to investigate the intensity of competitiveness in the industry, and data on the gap in market shares are employed to elucidate the dominance of the leading firm in Taiwan's notebook industry during the 1998–2004 period. The newly developed Panel SURADF tests advanced by Breuer et al. [Misleading inferences from panel unit root tests with an illustration from purchasing power parity, Rev. Int. Econ. 9 (3) (2001) 482–493] are employed to determine whether the market share gap is stationary or not. Unlike other panel-based unit root tests which are joint tests of a unit root for all members of a panel and are incapable of determining the mix of I(0) and I(1) series in a panel setting, the Panel SURADF tests have the advantage of being able to investigate a separate unit root null hypothesis for each individual panel member and are, therefore, able to identify how many and which series in a panel are stationary processes. The empirical results from several panel-based unit root tests substantiate that the market shares of the firms studied here are non-stationary, indicating that Taiwan's notebook industry is highly competitive; however, Breuer et al.'s [12] Panel SURADF tests unequivocally show that only Compal is stationary with respect to market share gap. In terms of sales volume, Compal is the second largest firm in the notebook industry in Taiwan, and the results indicate that it alone has the opportunity to become the market share leader in the notebook industry.

As a general rule, the leading firm in a market is usually able to maintain its position since it dominates the market share of that industry. Firms that are behind in terms of market share virtually have little chance of taking over the leading role. In this study, we employ the gap in market share to analyze whether the followers can catch up with the leader in the highly competitive environment of the notebook industry of Taiwan. According to a report by Taiwan's Market Intelligence Center (MIC), the market share of the world's notebooks manufactured in Taiwan rose from 65% in 2003 to an impressive 70% in 2004. In other words, Taiwan's notebook firms have been able to further enhance their dominance in the global notebook industry. Important here, in that the notebook industry has reached a mature stage, is that most of Taiwan's notebook producers have aggressively expanded their manufacturing capacity in attempt to seize their rivals’ market share. In this study, we delve into the extent to which this market is truly competitive—that is, whether the leading firm will continue to lead the market and whether those who lag behind still have a chance to catch up with the leader. There are nine firms whose core products are notebook computers in Taiwan. Quanta is the leading firm in this industry and the largest notebook manufacturing company in the world. The other major players are Compal, Acer, FTC, Inventec, Asustek, Clevo Co., Twinhead and Arima. In previous studies [1], [2], [3], [4], [5], [6], [7] and [8], market share data have mostly been used to analyze whether an industry is truly competitive or not. By and large, the greater volatility there is in the distribution of market shares in an industry, the more competitive that industry is. In a mature industry, the leading company earns greater profits because it is better able to exploit its economic scale and market power. However, it should not be overlooked that when the market leader increases its market share, this may reflect a decrease in competitiveness. Recently, some studies have applied unit root tests on this issue. Gallet and List [7] have used conventional unit root tests (of the augmented Dickey–Fuller and Zivot–Andrew) to analyze market shares in the US cigarette industry. Conventional unit root tests, however, fail to consider information across firms, and worse, have lower power when compared with near-unit root but stationary alternatives. In order to increase the power in testing for a unit root, many researchers have employed panel data. Levin et al. [9] and Im et al. [10], for instance, have developed the asymptotic theory and the finite-sample properties of the ADF tests for use with panel data. Resende and Lima [8] have used a panel unit root test, the Im et al. [10] test to be exact, to analyze the market shares in Brazilian industry. This test has significantly improved power even with relatively small panels, but its inherent problem to this method is cross-sectional dependence. Taylor and Sarno [11] and Breuer et al. [12] have shown that the “all-or-nothing” nature of panel unit tests has not been fully addressed by recent methodological refinements to the Levin-Lin-Chu test. In this regard, Breuer et al. [12] claim that, by analogy to a simple regression, when an F-statistic rejects the null hypothesis that a vector of coefficients is equal to zero, it is not necessarily true that each coefficient is nonzero. Likewise, when the unit root null hypothesis is rejected, it may very well not be justified to assume that all series in the panel are stationary. In contrast to those panel-based unit root tests that are joint tests of a unit root for all members of a panel and that are incapable of determining the mix of I(0) and I(1) series in a panel setting, Panel SURADF tests investigate a separate unit root null hypothesis for each and every individual panel member. In so doing, they clearly identify how many and which series in the panel are stationary processes. Hence, this paper uses Panel SURADF tests to test whether the notebook industry market is truly competitive; we then test whether followers are in a position to catch up with or even surpass the leader in Taiwan's notebook industry. This empirical study makes some important contributions to this line of research in its determination of whether there was a highly competitive environment in Taiwan's notebook industry during the 1998–2004 period. Taiwan's notebook industry provides an interesting forum for empirical research for several reasons. First of all, Taiwan's notebook firms have manufactured more than 70% of all notebooks sold around the whole world. The notebook industry is in a mature stage, and we would expect that market demand for notebooks is not going to grow substantially in the near future. Secondly, given current conditions, it would be interesting to determine whether the market leader can easily maintain its position or whether the followers can seize the leader's market in this mature industry. Thirdly, our results have an important policy implication for policymakers with a strong commitment to and extreme interest in this industry. The paper is organized as follows. Section 2 presents the data we use. Section 3 briefly describes the theoretical reasoning behind our choice of market share and market share gap. Section 4 first outlines the methodology we employ, then discusses the empirical findings and explains a few important policy implications. Finally, Section 5 reviews the conclusions we draw.

In this empirical study, we first employ both Im et al. [10] and Maddala and Wu [13] tests to study competitiveness in the notebook industry and then Breuer et al.’s [12] Panel SURADF unit tests to assess whether the market leading firm is apt to continue dominating Taiwan’s notebook industry. The results from both the Im et al. [10] and Maddala and Wu [13] tests cement the notion that Taiwan’s notebook industry is highly competitive. The results from Breuer et al.’s [12] Panel SURADF tests indicate that only Compal that is the second large firm has the opportunity to catch up with the leading firm, Quanta. The other firms whose market shares have big distance from the leader mean that they do not have chance to be the leader. In other words, the notebook industry is in ‘‘the bigger the better’’ situation. Market leader has several advantages that include greater bargaining power with suppliers and distribution, quality signal, learning curve and economies of scale. Buzzel et al. [14] and Porter [15] have provided solid empirical evidence of the importance of firms’ market share strategy. Furthermore, Bercovitz and Mitchell [16] claim that business scale, business scope and external ties providing organizational capital which offers survival benefits for large firms. This study sheds light on the competitiveness of the mature notebook industry, and as a result, provides a new angle on the strategy for those firms to consider. If the notebook industry does not have disruptive technology in R&D, the rank of market share is not changed in the mature stage. It is not easy to make changes in the firm that dominates the industry market. In this study, we find that only the second largest firm, Compal, poses a threat to the largest firm, Quanta. The market share of the remaining firms will either stay the same or shrink. If the small firms still want to survive in this market, the strategies of them are to merge, form strategic alliances and seek to disruptive technology in R&D. The rank of market share may have chance to rearrange.