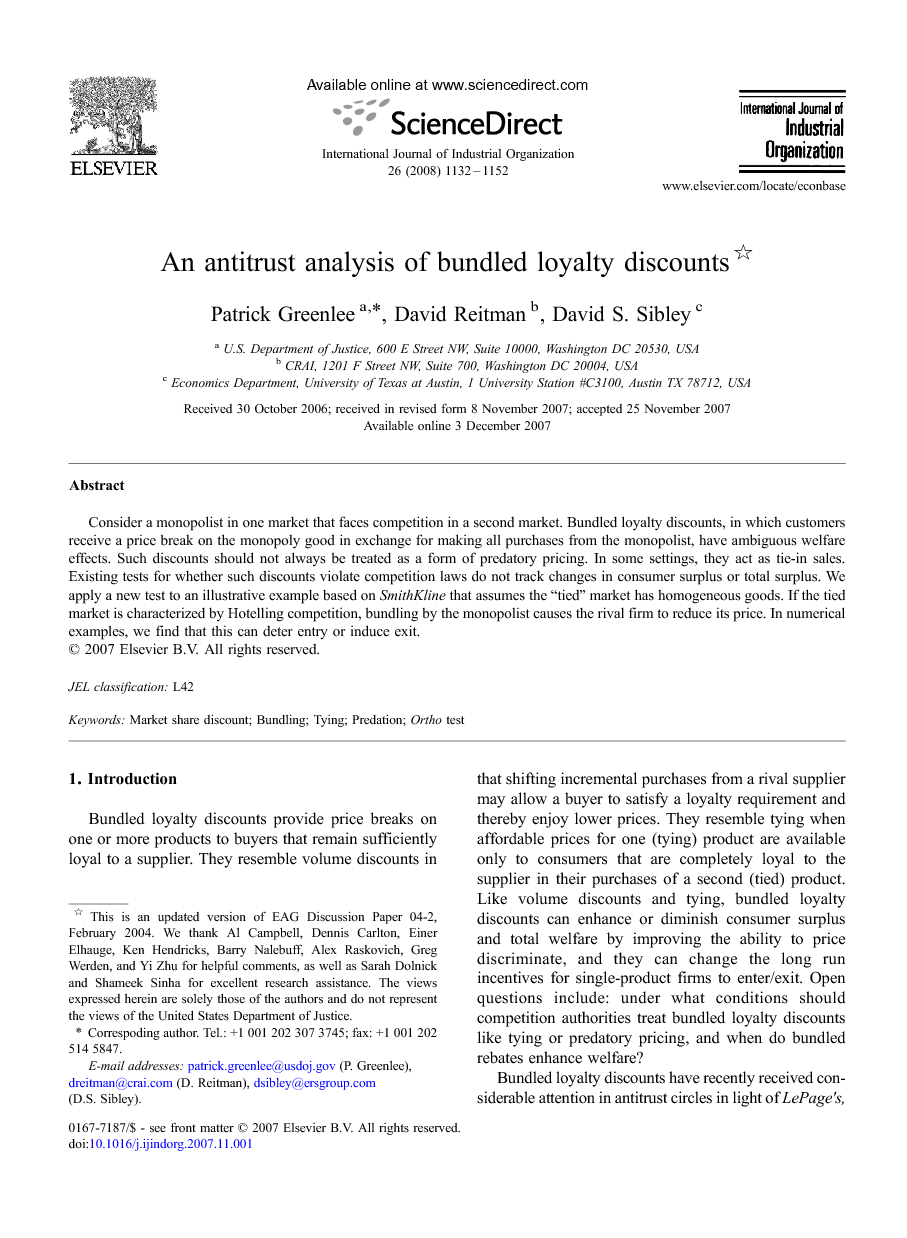 Consider a monopolist in one market that faces competition in a second market. Bundled loyalty discounts, in which customers receive a price break on the monopoly good in exchange for making all purchases from the monopolist, have ambiguous welfare effects. Such discounts should not always be treated as a form of predatory pricing. In some settings, they act as tie-in sales. Existing tests for whether such discounts violate competition laws do not track changes in consumer surplus or total surplus. We apply a new test to an illustrative example based on SmithKline that assumes the “tied” market has homogeneous goods. If the tied market is characterized by Hotelling competition, bundling by the monopolist causes the rival firm to reduce its price. In numerical examples, we find that this can deter entry or induce exit.

A main point of this article is that bundled rebates are not usefully analyzed using predatory pricing case law. Not only do prices typically exceed marginal cost, but anticompetitive effects may not require a short term profit sacrifice or a period of recoupment. Bundled rebates can generate anticompetitive effects, but they do so by con- fronting consumers with the choice between a collection of tied discount prices and unattractive standalone prices, all above cost. The analogy to tying, however, does not fit bundled rebates especially well either. When the rivalrous mar- ket has homogeneous products (Model 1), equilibrium bundled rebates act as a tying arrangement (Theorem 2). When there is product differentiation in the rivalrous market (Model 2), bundled loyalty discount programs, like mixed bundling, also provide a means to price dis- criminate between heterogeneous A -and- B consumers. The standalone price of A has a price discrimination role quite apart from inducing consumers to buy the bundle. This is unlike tying. This brings us to the second main issue in this article: are there tests that distinguish good bundled rebates from bad? Although the Ortho and VAA/BA tests have their uses, the discussion above suggests that they should be used with care, especially if loyalty programs are tailored to individual consumers. In Model 1, where sellers in B produce homogenous products, there may be useful tests for consumer welfare changes based on a comparison of the monopoly price of A before and the standalone price of A after the institution of bundled rebates. Absent a reliable estimate of the unbundled monopoly price of A , they depend on there being a distinct date at which bundled discounts are introduced. For example, if B is perfectly competitive, the dis- counted price of A falls, and the standalone price equals the pre-bundle monopoly price, then consumer surplus and total surplus have increased, even if the bundle price of B exceeds marginal cost. Alternatively, if the stand- alone price of A exceeds the initial price of A , then we can infer that the bundled rebate reduces consumer welfare. This latter test does not apply to Model 2In Model 2, the pricing effects of bundling are com- plex and can raise or lower consumer and total welfare, even if the standalone price of A exceeds the pre-bund- ling monopoly price. The non-bundling firm is induced to lower its price, so in that sense a bundled loyalty discount introduced by the monopolist increases com- petition in the B market. On the other hand, the monopolist raises its price of B . Furthermore, as the share of A- and- B consumers increases, both the stand- alone and bundled prices of A fall, as competition intensifies for A -and- B consumers with a preference for firm 2. Given the potential for influencing the entry/exit decisions of competitors, there do not appear to be simple testsforwhetherbundlinghasreducedwelfareasthereare when the market for B is perfectly competitive. We conclude with a discussion of what our analysis implies about when bundled loyalty discounts should be held to violate antitrust laws. In Model 1, bundled discounts work because they act in a fashion similar to a two-part tariff. They do not affect the price that a B -only consumer pays, and their main impact is on the consumer surplus of those who buy both A and B . Furthermore, if the monopolist can extract all surplus in the A market without bundling, then bundled rebates do not raise profits. Intuitively, bundled rebates achieve what im- proved nonlinear pricing would accomplish in the monopoly market. Because the bundling firm is a monopolist in A , one might argue that doing a better job of extracting surplus from a rightly earned monopoly should not be an antitrust offence. On the other hand, using a competitive markettoextractmonopolyrentsmay raise price to consumers that do not purchase the mono- poly good, as well as generate deadweight losses in the competitive market that exceed the deadweight losses generated by a monopolist that does not link markets. Model 2 has more complex implications for antitrust. Because bundled discounts can induce exit or deter entry, they have the potential to be anti-competitive by most mainstream interpretations of Section 2 of the Sherman Act. Even absent exit/entry effects, bundled discounts affect the welfare of B -only consumers. The conditions that determine whether aggregate consumer welfare rises or falls, however, are subtle and likely hard to measure in practice. This suggests that prospective antitrust enforce- ment for bundled discounts should be conservative.