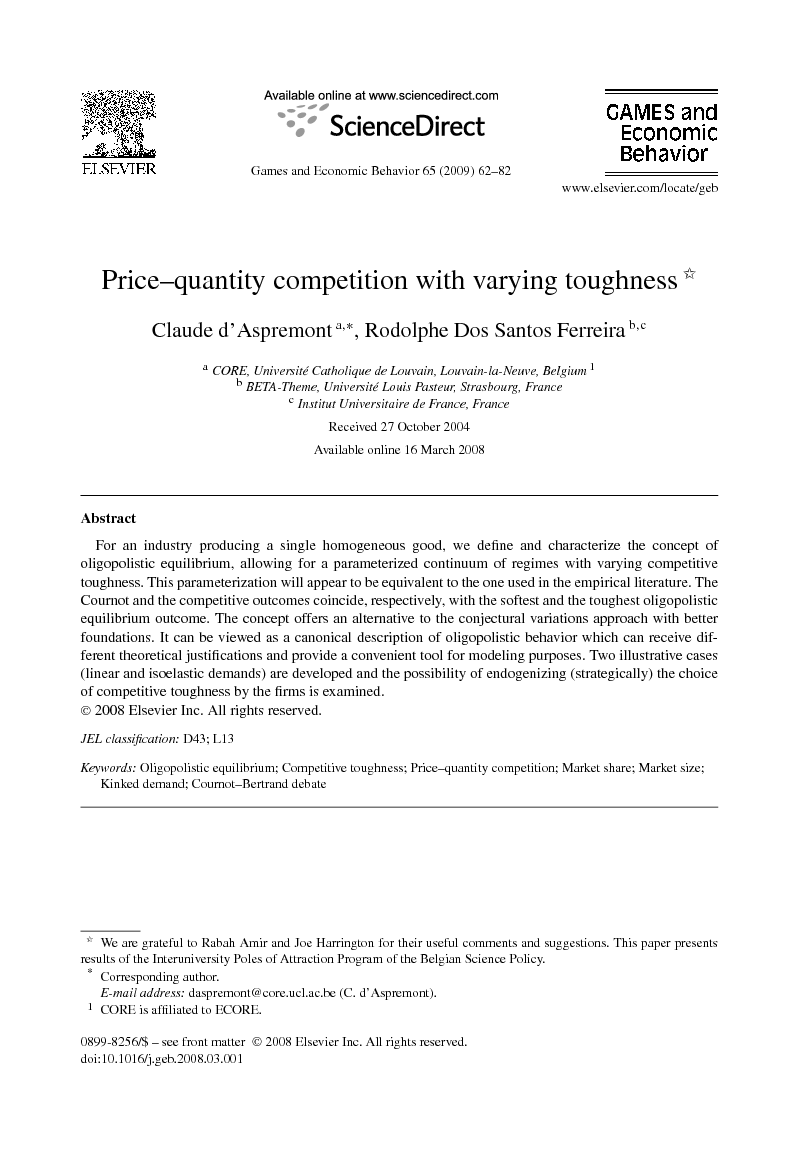 For an industry producing a single homogeneous good, we define and characterize the concept of oligopolistic equilibrium, allowing for a parameterized continuum of regimes with varying competitive toughness. This parameterization will appear to be equivalent to the one used in the empirical literature. The Cournot and the competitive outcomes coincide, respectively, with the softest and the toughest oligopolistic equilibrium outcome. The concept offers an alternative to the conjectural variations approach with better foundations. It can be viewed as a canonical description of oligopolistic behavior which can receive different theoretical justifications and provide a convenient tool for modeling purposes. Two illustrative cases (linear and isoelastic demands) are developed and the possibility of endogenizing (strategically) the choice of competitive toughness by the firms is examined.

A fundamental problem of oligopoly theory is equilibrium indeterminacy. This indeterminacy is not only of the kind associated with a given equilibrium concept and the possibility of multiple solutions. It is mainly related to the choice of the equilibrium concept itself. This is most simply demonstrated in static models by the choice between quantity competition (usually assimilated to the approach of Cournot, 1838) and price competition (linked to Bertrand’s 1883 critique of Cournot). However, this second kind of indeterminacy only reflects the variety of observed competition regimes varying in their degree of toughness and implying different firm conducts. In order to formalize this variety of oligopoly regimes, we shall adopt an approach that was pioneered by Shubik (1959), where firms do not privilege one strategic variable but behave strate- gically in price–quantity pairs. This approach will lead us to a comprehensive and canonical concept of oligopolistic equilibrium providing a unified formulation of the whole spectrum of enforceable non-cooperative equilibria. The proposed concept remains Cournotian and considers oligopolistic competition as a generalization of monopoly. Two types of competition are at stake: the struggle of the whole industry for market size, and the struggle of each individual firm for its market share. With each type of competition will be associated a constraint. The set of solutions (corresponding to different competition regimes) can be parameterized according to the relative values of the Lagrange multipliers associated with these two constraints. This parameterization can be interpreted in terms of competitive toughness. At one extreme, one finds the Cournot so- lution as the softest oligopolistic equilibrium, and, at the other extreme, one finds the competitive equilibrium when competitive toughness is maximal. As mentioned by Shubik (1959), the price equilibrium (corresponding to Bertrand competition) is a particular price–quantity equilibrium, which coincides with the competitive equilibrium when all firms are producing at equilibrium. All other enforceable outcomes are intermediate to these two extremes. This parameterization will appear to be equivalent to the one used in the empirical literature, building econometric models that incorporate general equations where each firm conduct in set- ting price or quantity is represented by a parameter, itself viewed as an index of competitiveness. This so-called “conduct parameter method” has been at the basis of the new empirical industrial organization and has generated a large number of empirical studies (for a synthesis see Bresna- han, 1989 and, for more recent references, Corts, 1999). It is related to the conjectural variations approach since both methods encompass the same theories of oligopoly. But, as stressed by Bres- nahan, “the phrase ‘conjectural variations’ has to be understood in two ways: it means something different in the theoretical literature than the object which has been estimated in the empirical papers” (Bresnahan 1989, p. 1019). Moreover, in the theoretical literature, conjectural variations have been criticized for their lack of theoretical foundations, at least in static models. 2 The goal of the canonical representation of oligopolistic competition that we propose here is to provide a convenient tool to the theorist (it amounts to use a generalization of Cournot equilibrium), which is more game-theoretically founded than the conjectural variations theory, and which, in parallel to the conduct parameter method used by the econometrician, still nests a continuum of theories of oligopolies. This theoretical tool will be derived and justified from dif- ferent approaches, such as the “supply-function,” the “facilitating practices” or the “min-pricing scheme” approaches. 3 Each of these approaches may be more relevant for specific industries. Forexample, introducing meeting-the-competition clauses (as a facilitating practice) can be appro- priate for retail (e.g. Sears catalogue) and intermediate product markets, or using supply-function models can be fruitful, for example, in studying the electric power generation market. 4 Our canonical representation is meant for all and readily amenable to empirical testing. In Section 2 we define and characterize the concept of oligopolistic equilibrium for an industry producing a single homogeneous good. The resulting parameterization is derived and compared to the empirical conduct parameterization. In Section 3, we examine some alternative theoretical justifications of the concept. In Section 4, we analyze the two standard cases of a linear and of an isoelastic demand and, in Section 5, we examine the possibility of endogenizing (strategically) the choice of competitive toughness by the firms. We briefly conclude in Section 6.

In this paper we have seen that a great variety of oligopolistic regimes can be analyzed in a sin- gle static model where all regimes that are potentially enforceable as non-cooperative equilibria can be parameterized in terms of individual competitive toughness. Oligopolistic situations can vary in many respects: their sectoral characteristics, the efficiency distribution of firms, the norms of conduct in the industry, the timing of decisions, the consumer rationing scheme, the contract- ing possibilities, etc. The specification of all these features may generate a complex model in which the competition regime is well determined. An example already mentioned is Kreps and Scheinkman (1983). But our claim is that, in many oligopolistic situations, the equilibrium anal- ysis can be performed in a single reduced canonical model. This canonical model then provides a convenient tool to investigate some relevant issues for competition and economic policy. 18 More- over it is ready-made for empirical testing, since its parameterization happens to be isomorphic to the one used in econometric models adopting the “conduct parameter method.” Of course, many issues remain to be treated. The extension of the concept to differentiated good industries has already been undertaken (d’Aspremont and Dos Santos Ferreira, 2005, and d’Aspremont et al., 2007). Furthermore, the existence problem requires more development, in particular to explore the role of the kink in the producer’s feasibility frontier in relieving curva- ture conditions. In studying the existence problem though, there is now a crucial change in focus, since the main question is not the existence of equilibrium in a particular regime but the deter- mination of the set of enforceable competition regimes, a set that changes with the oligopolistic situation. The study of the variation of this set in relation to the context is a new and important issue on the agenda