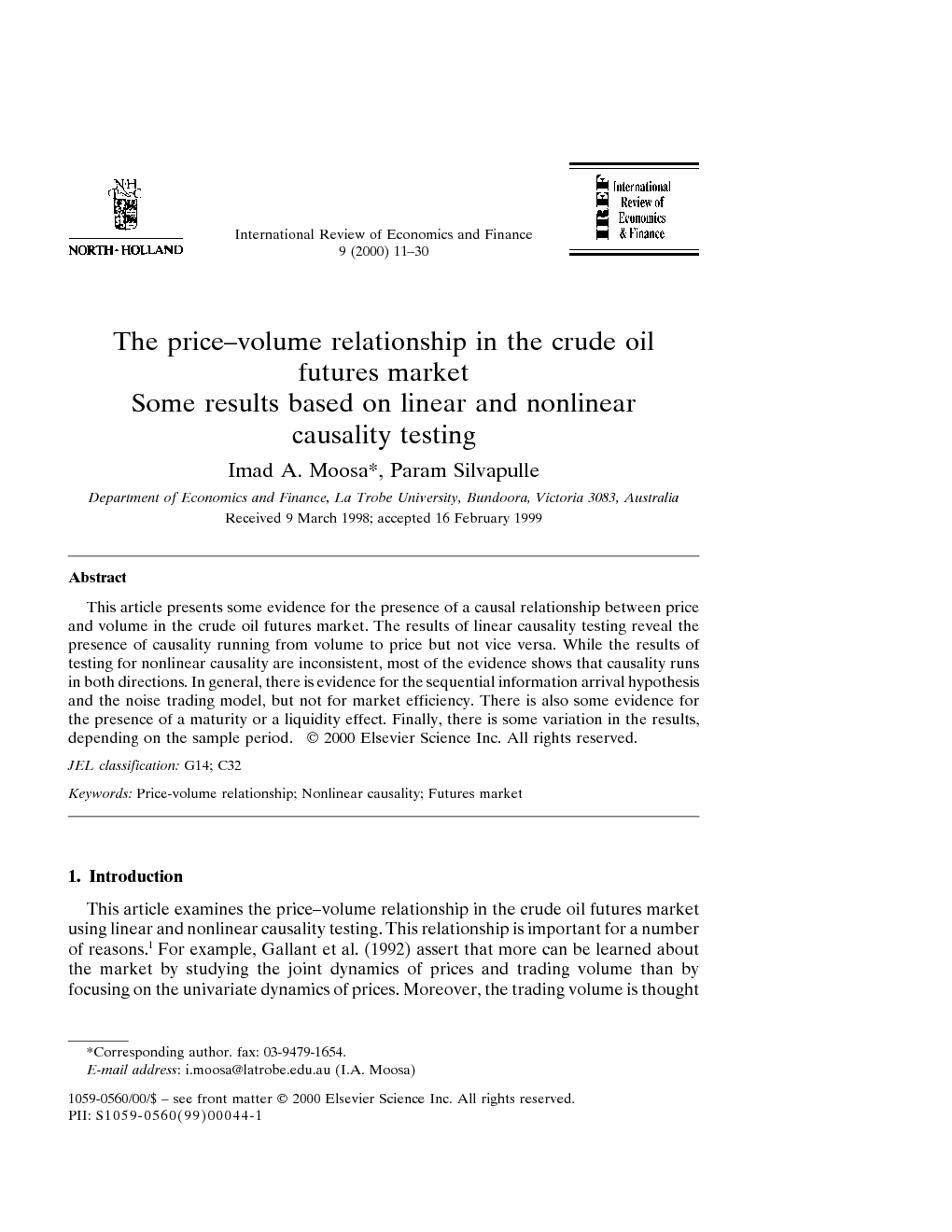 This article examines the price–volume relationship in the crude oil futures market using linear and nonlinear causality testing. This relationship is important for a number of reasons.1 For example, Gallant et al. (1992) assert that more can be learned about the market by studying the joint dynamics of prices and trading volume than by focusing on the univariate dynamics of prices. Moreover, the trading volume is thought to reflect information about changes in investors' expectations. Another reason for the interest in the presence or otherwise of a strong price–volume relationship is that it provides support for using technical analysis as opposed (or in addition) to fundamental analysis.2 Apart from Hiemstra and Jones (1994), Fujihara and Mougoue (1997), and Abhyankar (1998), the available empirical evidence on the price–volume relationship is based on conventional (linear) Granger causality testing. Baek and Brock (1992) have shown that these tests have low power against the nonlinear alternatives. Hence, any test based on the assumption of linearity will fail to detect nonlinear dependence. Nonlinear dependence may be present if the price and volume are generated by nonlinear processes: this hypothesis is theoretically plausible and empirically substantiated.3 Recent work has revealed the existence of nonlinear structure in the process generating returns in financial and commodity markets. These nonlinearities are normally attributed to nonlinear transaction cost functions, the role of noise traders, and market microstructure effects (Abhyankar, 1998). It is now widely accepted that the relationship between economic and financial time series are mainly nonlinear. As a result, testing for nonlinear causal relationships between two time series has received considerable attention in the recent literature. In this article, the nonlinear causality test proposed by Baek and Brock (1992) is used to study the price–volume relationship in the crude oil futures market. Further motivation for using nonlinear models is provided by Savit (1988)(pp. 271–272), who argued that financial and commodity markets are likely to be examples of dynamic systems manifesting nonlinearities. He disputes the argument that fluctuations in time series are random and argues instead that the fluctuations are generated by inherent nonlinearities. The distinction between linear and nonlinear adjustment to any deviation from the equilibrium price lies in whether or not the magnitude of adjustment is proportional to the deviation. A proportional adjustment implies a linear relationship, but this kind of adjustment cannot generate the randomness observed in financial and commodity markets. Savit argues that nonlinear adjustment can produce this kind of behavior. Hsieh (1991) put forward a similar point by arguing that large moves in prices, which are greater than what is expected under a normal distribution, may be attributed to nonlinearities. This article is organized as follows: We first present a discussion of the theory of the price–volume relationship, followed by a brief outline of the recent empirical evidence. We then present the data and examine the time series properties of the underlying variables. This is followed by an outline of the methodology used to test for linear causality and the results of the tests. The same follows for nonlinear causality testing.

We start these concluding remarks by recapitulating on the motivation for writing this article. Given the diversity of the conditions under which the price–volume relationship has been tested, it may be useful to state, ex ante, what we thought this study had to offer. We thought that since the available empirical evidence is mixed, a new piece of work could be potentially capable of contributing to the emergence of a consensus view on the underlying issue. The two studies of the oil market by Foster (1995) and by Fujihara and Mougoue (1997) produced contradictory results. Our study aimed at combining some features of the two studies. Thus, we used the same technique used by Fujihara and Mougoue to test for nonlinear causality but a different test for linear causality. And, like Foster, we decided to consider the maturity effect. We also thought that it would be useful to examine the relationship by including and excluding periods of turmoil in the oil market. We therefore proceeded to examine the relationship between prices and the trading volumes of the WTI crude oil futures contracts using daily data covering the period between January 2, 1985, and July 1, 1996. Two futures contracts were used for this purpose: the three-month and the six-month contracts. What has this study achieved, ex post? As a preliminary step, we tested for unit root and the presence of volatility in the time series and found that they all have unit root and ARCH effect. We then tested for linear causality, using the Hsio procedure, and found that causality runs from volume to price regardless of the choice of the price variable, the maturity of the contract, and the time period. When we tested for nonlinear causality, using the Baek-Brock test, we obtained results mostly showing bi-directional causality for both contracts, albeit inconsistent across sample periods. However, the evidence suggested that the nonlinear causality running from price to volume in the case of the six-month contract was due to volatility dependence. Similar results were obtained when the price variable was the absolute price change. The results presented in this study are broadly supportive of those obtained by Hiemstra and Jones (1994) and Fujihara and Mougoue (1997) in the sense of highlighting the importance of nonlinear causality. There are, however, a few differences. These two studies produced weak evidence for linear causality. For example, Fujihara and Mougoue found no linear causality in the case of heating oil, unidirectional causality from price to volume in the case of unleaded gas, and unidirectional causality from volume to price in the case of crude oil. There is no readily available explanation for why different kinds of oil products produce different linear causality results. The results of this study are more consistent in revealing linear causality from volume to price regardless of the choice of the maturity, the price variable, and the time period. The nonlinear causality test results are slightly different because Fujihara and Mougoue found unidirectional causality from volume to price only in the case of crude oil. Although our results are not entirely consistent, they show bi-directional nonlinear causality in most cases. In agreement with Foster (1995), the results provide evidence for the presence of a liquidity or maturity effect and for market inefficiency. We find the explanations presented by Foster for inefficiency to be plausible. In general, the results presented in this study are consistent with the predictions of the sequential information arrival hypothesis and the noise trading model. This conclusion would not have been reached on the basis of the results of linear causality testing alone. These results are useful for regulators, market participants, and the efficiency of the oil futures market. The results are useful for regulators when they consider such measures as limits on daily price movements and positions. For market participants, the results are useful since they imply that volume can be used to predict prices, lending support to technical analysis. Finally, the results imply market inefficiency, which may be, as Foster (1995) puts it, due to mimetic contagion or the fact that traders may condition their prices on previous volumes. A word of warning is warranted here. The test used in this paper is powerful in detecting nonlinear causal dependence, but it provides no guidance in relation to the source of this dependence. This explanation must be left to economic theory.