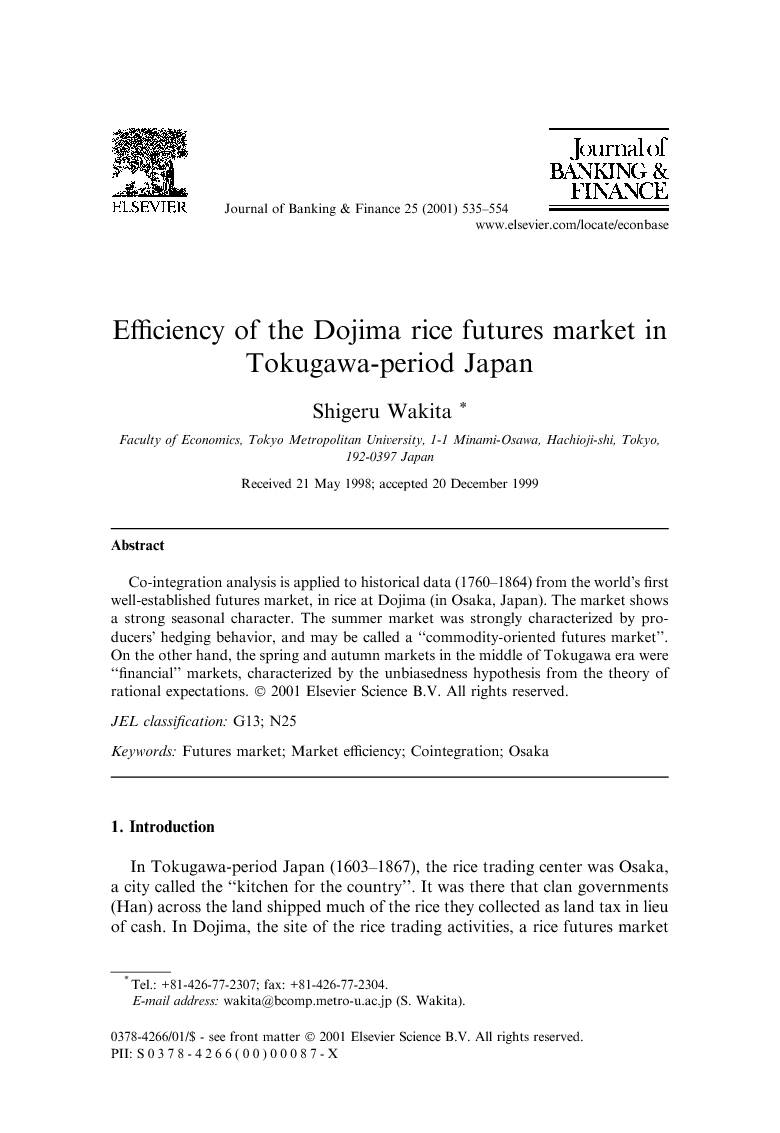 Co-integration analysis is applied to historical data (1760–1864) from the world’s first well-established futures market, in rice at Dojima (in Osaka, Japan). The market shows a strong seasonal character. The summer market was strongly characterized by producers’ hedging behavior, and may be called a “commodity-oriented futures market”. On the other hand, the spring and autumn markets in the middle of Tokugawa era were “financial” markets, characterized by the unbiasedness hypothesis from the theory of rational expectations.

In Tokugawa-period Japan (1603–1867), the rice trading center was Osaka, a city called the “kitchen for the country”. It was there that clan governments (Han) across the land shipped much of the rice they collected as land tax in lieu of cash. In Dojima, the site of the rice trading activities, a rice futures market continuously operated. Standard textbooks on futures markets (e.g., Duffie, 1989; Blank et al., 1991) identify the Dojima rice market as “the world’s first well-established futures market”, and the Chicago Commodity Exchange Handbook explicitly states that futures trading originated in Osaka. During the past 50 years, this rice market has been well-investigated in Japan, and in English literature, Schaede (1989) offers an excellent description of it. Schaede has also identified the Dojima rice market as a futures market by examining the following criteria: (1) only exchange members can participate in the market; (2) contracts traded are standardized; (3) for each position, a “good-faith” money has to be deposited at the clearinghouse; (4) trading is not bilateral, but the clearinghouse enters each transaction as a third party and guarantees the fulfillment of all contracts; (5) the contract runs for a certain trading period and open positions are reassessed daily in accordance with price fluctuations; and (6) positions dissolved before the end of the trading period are cleared by cash settlement. Schaede has concluded that the market practices generally satisfied these criteria. Inspite of careful examination of institutional setup of the market, Schaede, as well as many studies in Japan, have not analyzed it quantitatively because of the lack of reliable data. A recent paper by Ito (1993), however, has used standard techniques of present-day economics, i.e., he demonstrated that the Dojima rice market failed to satisfy the “unbiasedness” condition of the rational expectations test. In fact, Ito concluded that the market cannot be deemed to have consisted of participants who were using information effectively, and thus it was not “efficient”; a conclusion based on the fact that (i) the futures price in the market on average failed to predict the spot price accurately, and (ii) the stock of rice at the time of forecasting had a strong correlation with the ex post forecast error. This suggests that, contrary to the high degree of institutional perfection attributed to the market by the existing studies, the market was considerably limited in its ability to process information. On the other hand, when considering the period’s patterns of rice production and transportation, many institutional features seem to justify calling trading operations in the market efficient. It is this contradiction that underlies the purpose of the present paper. That is, to undertake an empirical analysis of the market by taking such features into account, and to demonstrate that rational expectations were indeed at work in providing an effectively operating futures market. The type of study used here is also meaningful in that, provided the theoretical constraints existing at the time are properly understood, it shows that standard analytical techniques of modern economics can be used for an analysis of economic phenomena taking place several hundred years ago. Moreover, it can elucidate across time and space our understanding of the universal nature of the market mechanism. Compared to the present-day economy, which has a complex institutional setup and is subject to frequent violent shocks, the economy in the Tokugawa era was simpler and changed at a much slower pace; key features allowing us to assume with greater ease how a theoretically conceptualized economic model is supposed to operate. When considering that there exists an extensive time series of quantitative data on the rice trading activities in Dojima, it becomes quite apparent that the market serves as an ideal locus for verifying economic theory, while also offering a unique set of data factually substantiating the theory of a futures market with a level of precision that has not been reached by any other set of empirical data. Subsequently, a brief overview of the Dojima rice market is presented in Section 2, being followed in Section 3 with a description of a theoretical seasonal pattern of markets emphasizing particular features of the market. Then, after data are described in Section 4, a test of unbiasedness is conducted in Section 5; one which shows that the market followed a very regular seasonal pattern. Finally, more detailed discussions of the summer market are discussed in Section 6, with conclusions being contained in Section 7.