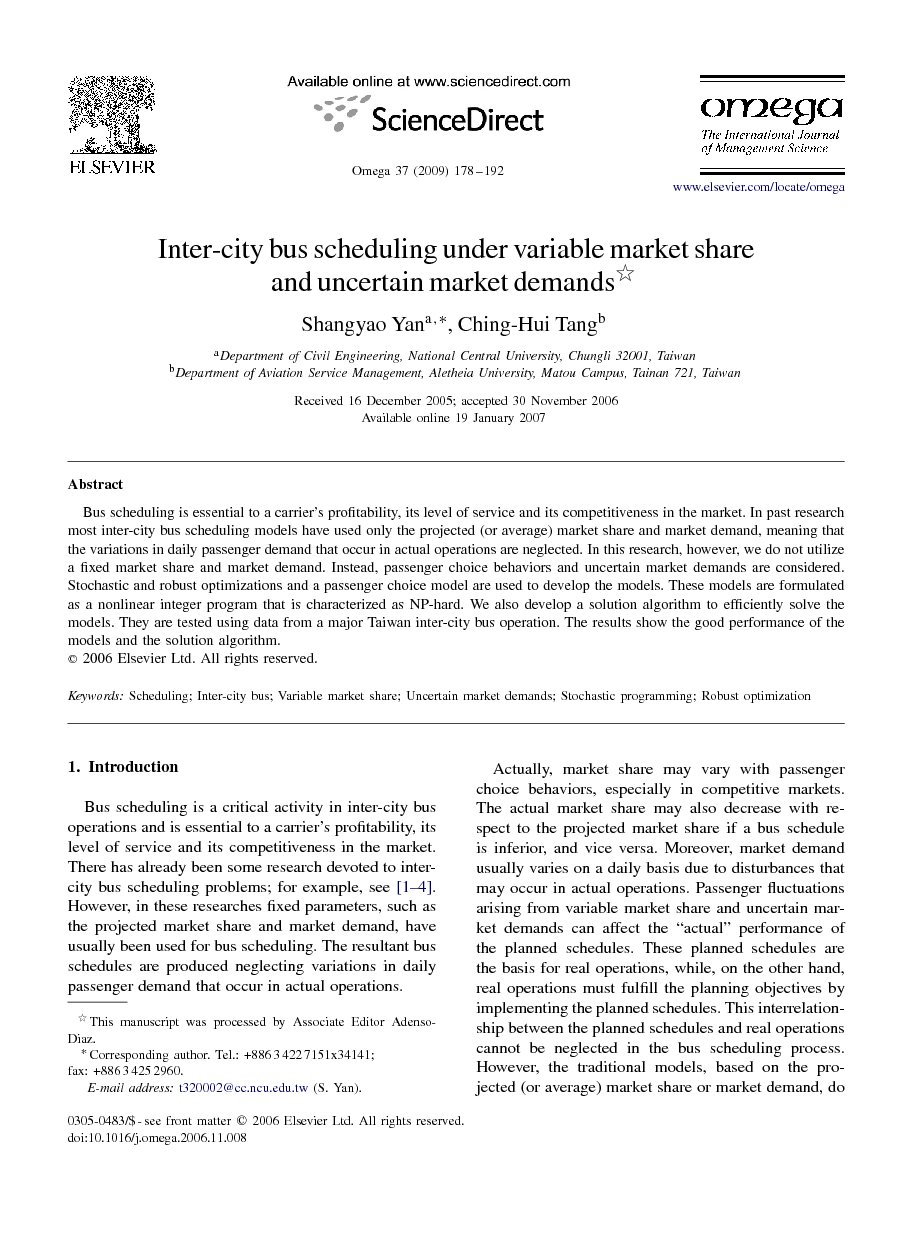 Bus scheduling is essential to a carrier's profitability, its level of service and its competitiveness in the market. In past research most inter-city bus scheduling models have used only the projected (or average) market share and market demand, meaning that the variations in daily passenger demand that occur in actual operations are neglected. In this research, however, we do not utilize a fixed market share and market demand. Instead, passenger choice behaviors and uncertain market demands are considered. Stochastic and robust optimizations and a passenger choice model are used to develop the models. These models are formulated as a nonlinear integer program that is characterized as NP-hard. We also develop a solution algorithm to efficiently solve the models. They are tested using data from a major Taiwan inter-city bus operation. The results show the good performance of the models and the solution algorithm.

In this research we use stochastic and robust optimization concepts to develop the SOBSM and the ROBSM. To consider passenger choice behaviors in actual operations, a passenger choice model is incor- porated into both the SOBSM and the ROBSM. This approach is expected to more accurately reflect any variations in the market share and market demand. Numerical tests, including three case studies as well as sensitivity analyses of the value and the number ofscenarios, are performed to evaluate the performance of the models. It is found that, although the DDBSM and the FMDBSM produce a better objective value than the SOBSM and the ROBSM in the planning stage, their optimal planned schedules lose optimality when applied in actual operations. It is therefore important that the actual performance of different planning models should be evaluated, after schedules are applied in actual oper- ations, instead of only evaluating their planning results. Such findings and other test results could serve as use- ful references for transportation planners and operators. Finally, aside from passenger demand, uncertain bus delays may occur in actual operations. This could also be incorporated into future models. In addition, we have only addressed the planning stage of the bus schedul- ing problem; the interrelationship between the planning and real-time stages, as affected by such uncertain fluc- tuations, is not considered. If the planned bus routes and real-time schedule adjustments can be integrated into the same model or framework, then the two stages could be systematically analyzed together, which might help to produce a better bus schedule. This is a future research topic.