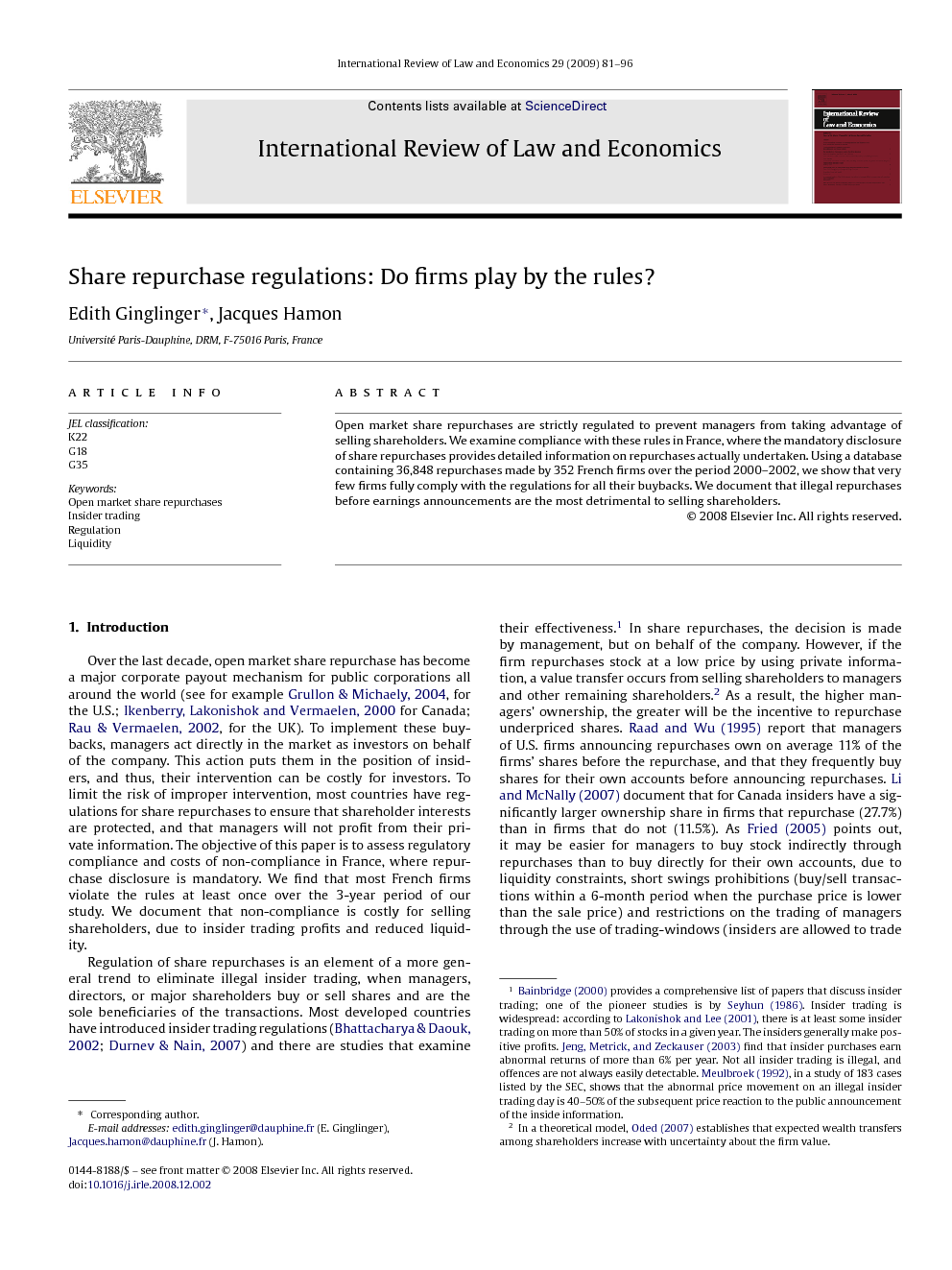 Open market share repurchases are strictly regulated to prevent managers from taking advantage of selling shareholders. We examine compliance with these rules in France, where the mandatory disclosure of share repurchases provides detailed information on repurchases actually undertaken. Using a database containing 36,848 repurchases made by 352 French firms over the period 2000–2002, we show that very few firms fully comply with the regulations for all their buybacks. We document that illegal repurchases before earnings announcements are the most detrimental to selling shareholders.

Although the regulations governing stock repurchases in France are similar to those applicable in the U.S., detected verification of compliance with French regulations is made possible through access to detailed data on the repurchases actually made. We study a large sample of actual share repurchases in France by obtaining access to a private database. We are thus able to carry out detailed verifications of compliance with the repurchase regulations using actual data rather than only survey data. We verify that the repurchases complied with the program terms as defined by the shareholders’ meeting that authorized the repurchases,comparingthepercentageofcapitalrepurchasedwith the authorized percentage, and the repurchase price with the max- imum authorized price. We show that most firms comply with the specifications of their programs, in large part because they generally set very broad limits. For instance, the authorized buy- back percentage is often set at the legal maximum, even when the firm’s objective is well below that level. Similarly, the maxi- mum repurchase price is often fixed at a high level that is easy to meet. We also study compliance with the daily repurchase volume regulations (repurchases must remain below 25% of the reference volume for a given day) and the ban on repurchasing stock just before results announcements (no repurchases may take place during the 15 days preceding publication of results). While most repurchases follow these rules, few firms are in total compliance. We find that 79% of firms violate the volume rule in at least one repurchase day, and the violations concern 23% of repurchase days. Moreover, 70% of firms have repurchased shares during a non- tradingwindowatleastonce,andthisconcerns5.5%oftradingdays. Weconcludethatfirmsarenotincompliancewithregulationsgov- erning share repurchases, particularly the smallest and least liquid firms. Finally, we study the impact of non-compliance with the reg- ulations on post repurchase abnormal returns and on market liquidity. When controlling for the standard determinants of liq- uidity, both volume and non-trading windows non-compliance lead to a perceptible deterioration in liquidity. However, volume non-compliance has no effect on abnormal returns following the repurchase day, whereas non-trading window non-compliance leads to an excess return of 1.92% over the 10-day period follow- ing the repurchase day. Thus, our results are consistent with the informedtradinghypothesisinthecaseofrepurchasesbeforeearn- ingsannouncementsandwiththecarelessmanager’shypothesisin the case of volume’ rule violations. Overall, firms are not in compliance with French regulations on open market repurchases, which imposes costs on selling shareholders. These costs are high for non-trading window non- compliant repurchases. A number of policy prescriptions follow from our results. First, as suggested by Fried (2005) , managers could be required to provide detailed information to the mar- ket about repurchases prior to conducting them, disclosing the specific purchase instructions given to their firm’s broker before the broker executes the buy order (including derivatives). Cur- rent pre-repurchase announcements are vague, and do not commit firms to actually repurchase shares. Second, we recommend a spe- cificscreeningbyAMFbeforeearningannouncements,compulsory disclosure of a calendar of earnings announcements and deter- rent penalties in case of repurchases during non-trading windows, which are the most harmful repurchases to selling shareholders.