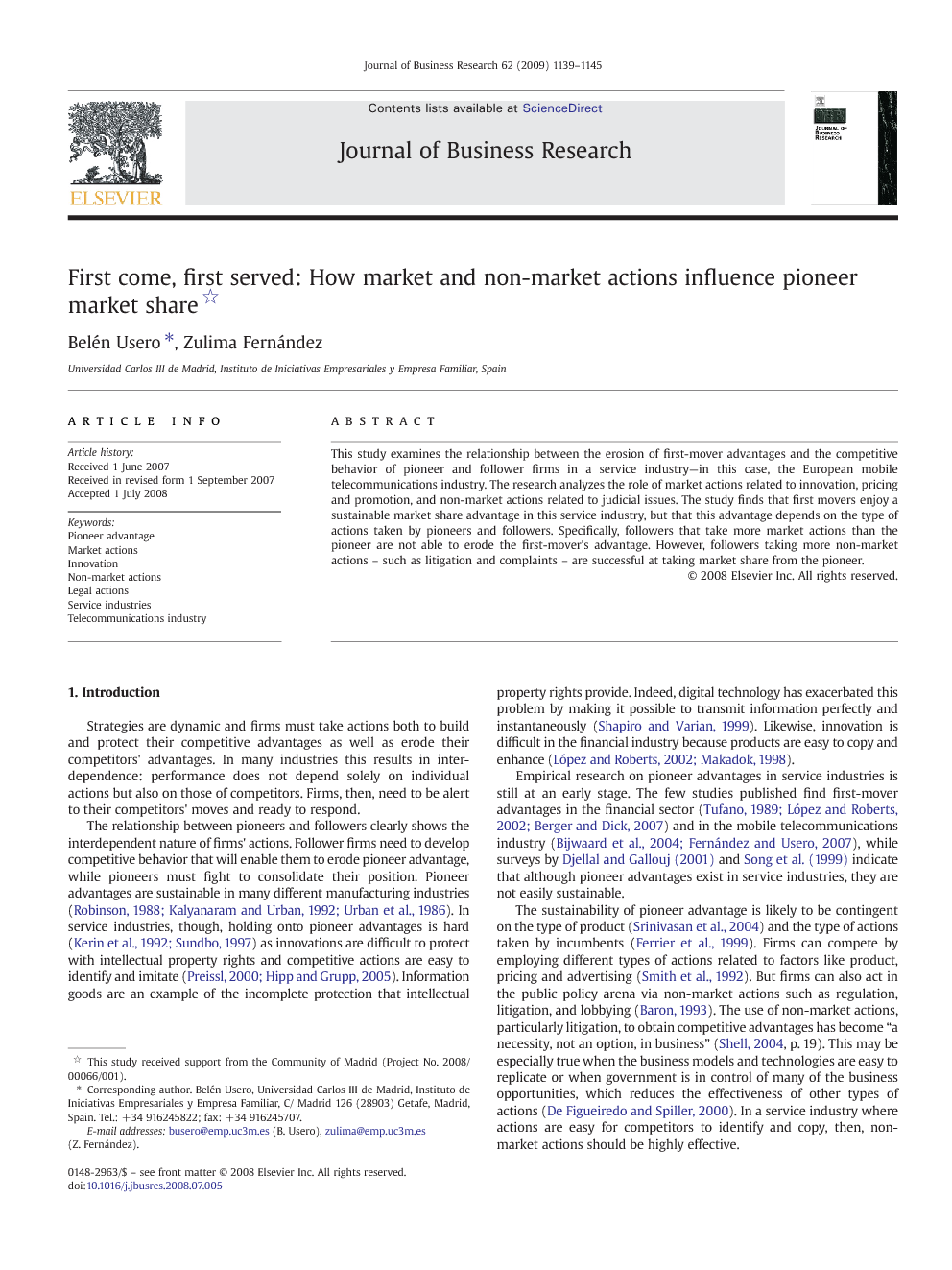 This study examines the relationship between the erosion of first-mover advantages and the competitive behavior of pioneer and follower firms in a service industry—in this case, the European mobile telecommunications industry. The research analyzes the role of market actions related to innovation, pricing and promotion, and non-market actions related to judicial issues. The study finds that first movers enjoy a sustainable market share advantage in this service industry, but that this advantage depends on the type of actions taken by pioneers and followers. Specifically, followers that take more market actions than the pioneer are not able to erode the first-mover's advantage. However, followers taking more non-market actions – such as litigation and complaints – are successful at taking market share from the pioneer.

Strategies are dynamic and firms must take actions both to build and protect their competitive advantages as well as erode their competitors' advantages. In many industries this results in interdependence: performance does not depend solely on individual actions but also on those of competitors. Firms, then, need to be alert to their competitors' moves and ready to respond. The relationship between pioneers and followers clearly shows the interdependent nature of firms' actions. Follower firms need to develop competitive behavior that will enable them to erode pioneer advantage, while pioneers must fight to consolidate their position. Pioneer advantages are sustainable in many different manufacturing industries (Robinson, 1988, Kalyanaram and Urban, 1992 and Urban et al., 1986). In service industries, though, holding onto pioneer advantages is hard (Kerin et al., 1992 and Sundbo, 1997) as innovations are difficult to protect with intellectual property rights and competitive actions are easy to identify and imitate (Preissl, 2000 and Hipp and Grupp, 2005). Information goods are an example of the incomplete protection that intellectual property rights provide. Indeed, digital technology has exacerbated this problem by making it possible to transmit information perfectly and instantaneously (Shapiro and Varian, 1999). Likewise, innovation is difficult in the financial industry because products are easy to copy and enhance (López and Roberts, 2002 and Makadok, 1998). Empirical research on pioneer advantages in service industries is still at an early stage. The few studies published find first-mover advantages in the financial sector (Tufano, 1989, López and Roberts, 2002 and Berger and Dick, 2007) and in the mobile telecommunications industry (Bijwaard et al., 2004 and Fernández and Usero, 2007), while surveys by Djellal and Gallouj (2001) and Song et al. (1999) indicate that although pioneer advantages exist in service industries, they are not easily sustainable. The sustainability of pioneer advantage is likely to be contingent on the type of product (Srinivasan et al., 2004) and the type of actions taken by incumbents (Ferrier et al., 1999). Firms can compete by employing different types of actions related to factors like product, pricing and advertising (Smith et al., 1992). But firms can also act in the public policy arena via non-market actions such as regulation, litigation, and lobbying (Baron, 1993). The use of non-market actions, particularly litigation, to obtain competitive advantages has become “a necessity, not an option, in business” (Shell, 2004, p. 19). This may be especially true when the business models and technologies are easy to replicate or when government is in control of many of the business opportunities, which reduces the effectiveness of other types of actions (De Figueiredo and Spiller, 2000). In a service industry where actions are easy for competitors to identify and copy, then, non-market actions should be highly effective. De Castro and Chrisman (1995) have explored competitive strategies of pioneers and followers, while only – as far as we know – Ferrier et al. (1999) and Ferrier (2001) have studied the relationship between competitive behavior and the erosion of leaders' market. This paper continues this research. It has two objectives: First, to study the sustainability of pioneer advantage in a service sector like the mobile telecommunications industry. Second, to analyze what types of competitive actions are most effective at eroding pioneer advantage. In addition to product innovations and pricing, the paper will focus on the effectiveness of non-market actions. The empirical study examines the European mobile telecommunications industry between 1997 and 2000. The characteristics of the sample make it possible to avoid two of the critical drawbacks of previous studies: the use of samples composed exclusively of US firms and the possible endogeny of market entry (Lieberman and Montgomery, 1998). First, most research has focused on US firms without considering whether the results could be generalizable to other countries. Our sample contains firms from countries in the European Union. Second, because firms were only able to enter the market when governments granted them licenses, the problem of endogeny disappears. The study also includes market and non-market actions, which – with the exception of Shaffer, Quasney, and Grimm (2000) – is not a standard practice in empirical research. Although prior research examines non-market actions, research on litigation is thin on the ground, as is work on the effects of non-market actions on firm performance (Hillman et al., 2004). This study analyzes both aspects. The paper is set out as follows. The next sections establish the theoretical framework and hypotheses that the study will test and present the empirical analysis. The paper concludes with a discussion of the results and a summary of the study's implications, limitations and directions for future research.