عنوان انگلیسی
When is a break-up of Gazprom good for Russia?
دانلود فوری مقاله + سفارش ترجمه 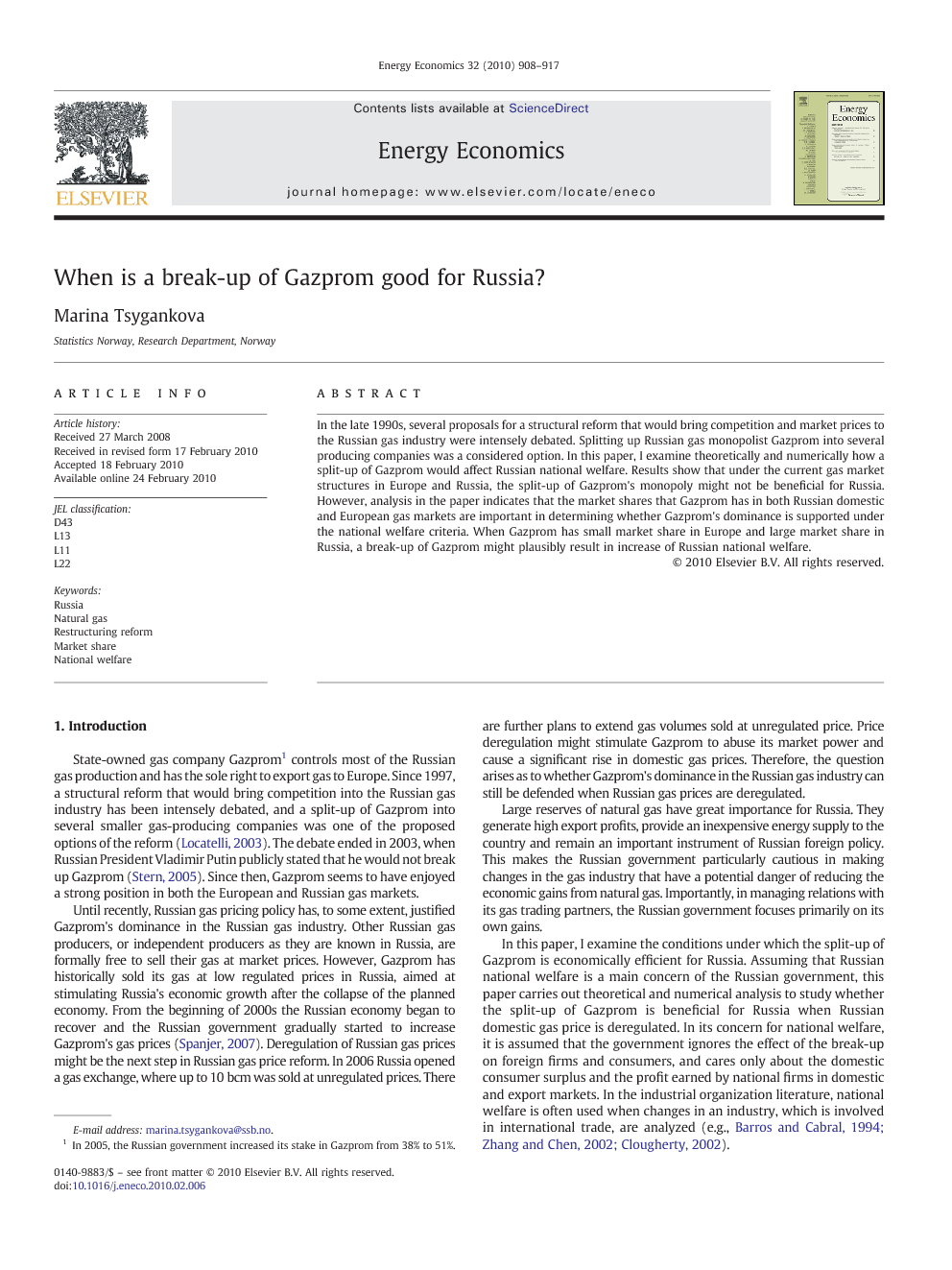 In the late 1990s, several proposals for a structural reform that would bring competition and market prices to the Russian gas industry were intensely debated. Splitting up Russian gas monopolist Gazprom into several producing companies was a considered option. In this paper, I examine theoretically and numerically how a split-up of Gazprom would affect Russian national welfare. Results show that under the current gas market structures in Europe and Russia, the split-up of Gazprom's monopoly might not be beneficial for Russia. However, analysis in the paper indicates that the market shares that Gazprom has in both Russian domestic and European gas markets are important in determining whether Gazprom's dominance is supported under the national welfare criteria. When Gazprom has small market share in Europe and large market share in Russia, a break-up of Gazprom might plausibly result in increase of Russian national welfare.

The aim of this paper is to explore the conditions that will support Gazprom's restructuring reform, as well as to study how splitting up Gazprom into several companies might affect the Russian and European gas markets. The paper argues analytically and by using numerical simulation that although the splitting up of Gazprom's productionwill bene fi t European andRussianconsumers, such reform will not necessarily increase Russian national welfare. Gazprom's position in the European market and the trade-off between consumer's surplus and producer's pro fi tin fl uences the attractiveness of the reform. In the absence of exports, the removal of Gazprom's dominant position in the Russian market, where price is deregulated, would be bene fi cial for Russia. In the current situation, when Russia is the largest supplier of natural gas to the European market, thereductions in Russian export pro fi t might outweigh the positive effects of reform in the domestic market. Comparing different scenarios, the paper suggests that the market shares that Gazprom has in both the Russian domestic and European markets are important factors that determine whether Gazprom's restructuring will be bene fi cial for Russia. The small market share of Gazprom in Europe and the large market share of Gazprom in the domestic market is a combination that plausibly results in Russian national welfare increasing because of the restructuring of Gazprom. The results of the paper have several important implications. First, for Gazprom, which opposes its restructuring reform, the presence of independent gas producers is important, especially if the develop- ment of the LNG market puts pressure on Gazprom in Europe. Second, increased competition from non-Russian gas suppliers in Europe might affect the restructuring of Gazprom and competition in the Russian gas market. Third, if Gazprom continues its acquisition of the gas assets of independent producers, which occurred in the recent years in the Russian gas industry, then more aggressive behavior by Gazprom in the European gas market can be expected. Finally, the size of Gazprom's restructuring reform is an important factor that determines the attractiveness of the reform under the national welfare criteria. It is important to stress that the results in this paper are based on a number of assumptions, especially deregulation of the Russian gas market and Cournot competition among producers in both the Russian and European gas markets. Therefore, this study cannot be used to predict future development of the supply side in the European gas market, which is characterized by long-term contracts, or the supply in the Russian gas market, which is characterized by strong government price regulation.