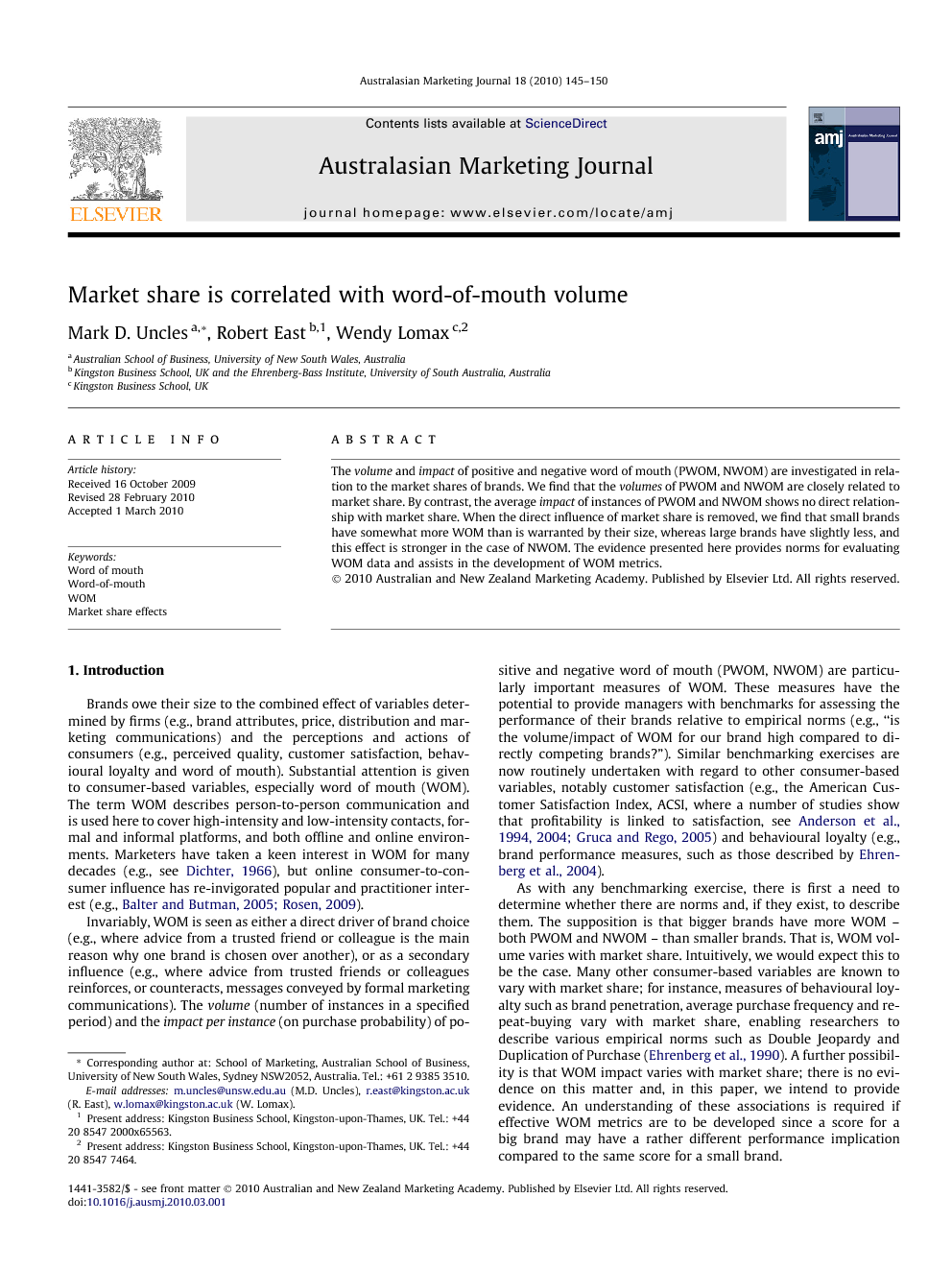 The volume and impact of positive and negative word of mouth (PWOM, NWOM) are investigated in relation to the market shares of brands. We find that the volumes of PWOM and NWOM are closely related to market share. By contrast, the average impact of instances of PWOM and NWOM shows no direct relationship with market share. When the direct influence of market share is removed, we find that small brands have somewhat more WOM than is warranted by their size, whereas large brands have slightly less, and this effect is stronger in the case of NWOM. The evidence presented here provides norms for evaluating WOM data and assists in the development of WOM metrics.

Brands owe their size to the combined effect of variables determined by firms (e.g., brand attributes, price, distribution and marketing communications) and the perceptions and actions of consumers (e.g., perceived quality, customer satisfaction, behavioural loyalty and word of mouth). Substantial attention is given to consumer-based variables, especially word of mouth (WOM). The term WOM describes person-to-person communication and is used here to cover high-intensity and low-intensity contacts, formal and informal platforms, and both offline and online environments. Marketers have taken a keen interest in WOM for many decades (e.g., see Dichter, 1966), but online consumer-to-consumer influence has re-invigorated popular and practitioner interest (e.g., Balter and Butman, 2005 and Rosen, 2009). Invariably, WOM is seen as either a direct driver of brand choice (e.g., where advice from a trusted friend or colleague is the main reason why one brand is chosen over another), or as a secondary influence (e.g., where advice from trusted friends or colleagues reinforces, or counteracts, messages conveyed by formal marketing communications). The volume (number of instances in a specified period) and the impact per instance (on purchase probability) of positive and negative word of mouth (PWOM, NWOM) are particularly important measures of WOM. These measures have the potential to provide managers with benchmarks for assessing the performance of their brands relative to empirical norms (e.g., “is the volume/impact of WOM for our brand high compared to directly competing brands?”). Similar benchmarking exercises are now routinely undertaken with regard to other consumer-based variables, notably customer satisfaction (e.g., the American Customer Satisfaction Index, ACSI, where a number of studies show that profitability is linked to satisfaction, see Anderson et al., 1994, Anderson et al., 2004 and Gruca and Rego, 2005) and behavioural loyalty (e.g., brand performance measures, such as those described by Ehrenberg et al., 2004). As with any benchmarking exercise, there is first a need to determine whether there are norms and, if they exist, to describe them. The supposition is that bigger brands have more WOM – both PWOM and NWOM – than smaller brands. That is, WOM volume varies with market share. Intuitively, we would expect this to be the case. Many other consumer-based variables are known to vary with market share; for instance, measures of behavioural loyalty such as brand penetration, average purchase frequency and repeat-buying vary with market share, enabling researchers to describe various empirical norms such as Double Jeopardy and Duplication of Purchase (Ehrenberg et al., 1990). A further possibility is that WOM impact varies with market share; there is no evidence on this matter and, in this paper, we intend to provide evidence. An understanding of these associations is required if effective WOM metrics are to be developed since a score for a big brand may have a rather different performance implication compared to the same score for a small brand. We also consider the possibility of deviations from any norms that are found. WOM volumes might differ from the straightforward relationship between market share and WOM volume if large brands are seen as consistently better or consistently worse than small brands, inducing extra positive or negative comment. Assuming long-run stability in market structure, large brands could have less PWOM if this is offset by variables determined by the firm, such as greater weight of advertising or more complete distribution coverage. Such specific deviations will be important for individual brands at a particular moment in time but, from the viewpoint of establishing generalizations, the deviations that occur systematically have more significance than those that are idiosyncratic and restricted to a single brand. We describe these systematic deviations as “residual effects” and consider evidence for them later in the paper.