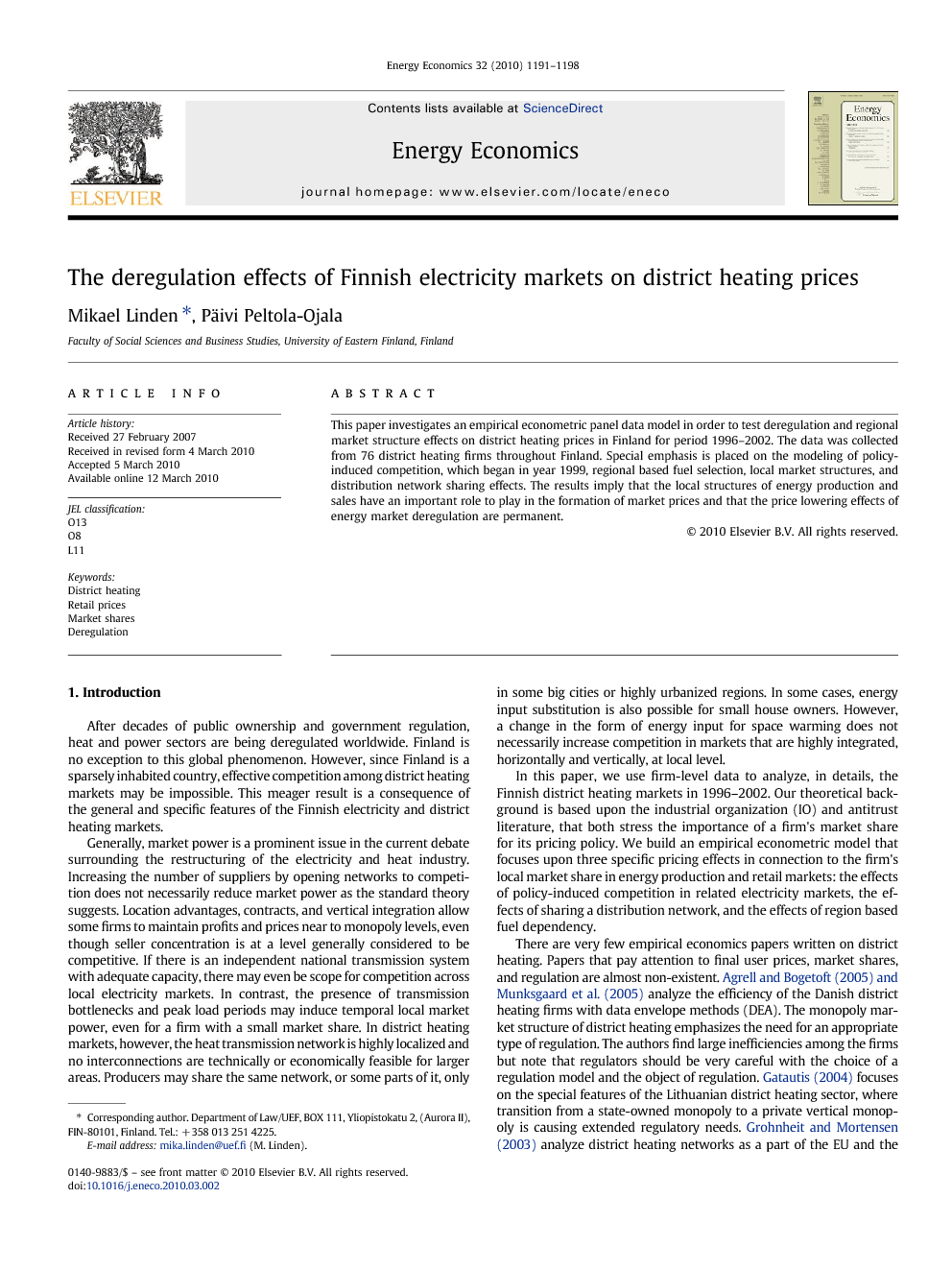 This paper investigates an empirical econometric panel data model in order to test deregulation and regional market structure effects on district heating prices in Finland for period 1996–2002. The data was collected from 76 district heating firms throughout Finland. Special emphasis is placed on the modeling of policy-induced competition, which began in year 1999, regional based fuel selection, local market structures, and distribution network sharing effects. The results imply that the local structures of energy production and sales have an important role to play in the formation of market prices and that the price lowering effects of energy market deregulation are permanent.

After decades of public ownership and government regulation, heat and power sectors are being deregulated worldwide. Finland is no exception to this global phenomenon. However, since Finland is a sparsely inhabited country, effective competition among district heating markets may be impossible. This meager result is a consequence of the general and specific features of the Finnish electricity and district heating markets. Generally, market power is a prominent issue in the current debate surrounding the restructuring of the electricity and heat industry. Increasing the number of suppliers by opening networks to competition does not necessarily reduce market power as the standard theory suggests. Location advantages, contracts, and vertical integration allow some firms to maintain profits and prices near to monopoly levels, even though seller concentration is at a level generally considered to be competitive. If there is an independent national transmission system with adequate capacity, there may even be scope for competition across local electricity markets. In contrast, the presence of transmission bottlenecks and peak load periods may induce temporal local market power, even for a firm with a small market share. In district heating markets, however, the heat transmission network is highly localized and no interconnections are technically or economically feasible for larger areas. Producers may share the same network, or some parts of it, only in some big cities or highly urbanized regions. In some cases, energy input substitution is also possible for small house owners. However, a change in the form of energy input for space warming does not necessarily increase competition in markets that are highly integrated, horizontally and vertically, at local level. In this paper, we use firm-level data to analyze, in details, the Finnish district heating markets in 1996–2002. Our theoretical background is based upon the industrial organization (IO) and antitrust literature, that both stress the importance of a firm's market share for its pricing policy. We build an empirical econometric model that focuses upon three specific pricing effects in connection to the firm's local market share in energy production and retail markets: the effects of policy-induced competition in related electricity markets, the effects of sharing a distribution network, and the effects of region based fuel dependency. There are very few empirical economics papers written on district heating. Papers that pay attention to final user prices, market shares, and regulation are almost non-existent. Agrell & Bogetoft, 2005 and Munksgaard et al., 2005 analyze the efficiency of the Danish district heating firms with data envelope methods (DEA). The monopoly market structure of district heating emphasizes the need for an appropriate type of regulation. The authors find large inefficiencies among the firms but note that regulators should be very careful with the choice of a regulation model and the object of regulation. Gatautis (2004) focuses on the special features of the Lithuanian district heating sector, where transition from a state-owned monopoly to a private vertical monopoly is causing extended regulatory needs. Grohnheit and Mortensen (2003) analyze district heating networks as a part of the EU and the Nordic combined heat and power (CHP) industry (see also Olsen and Munksgaard, 1998). Both papers stress the call for careful analysis of competition between natural gas and a range of other fuels on the market for space heating. Although these papers offer valuable reviews of district heating issues in the EU and Nordic countries, Brännlund et al. (2004) is more interesting, in both methods and results, for our context. Brännlund et al. claim that market imperfections are present with respect to the use of wood as fuel in the Swedish district heating sector. This single special aspect is important because it shows the importance of non competitive market conditions. In this respect, our target is more direct, as we model the price responses of district heating firms to their local market conditions. The structure of paper is as follows. Section 2 provides a closer look at the Finnish district heating markets. Section 3 introduces our econometric methods, specifications with relevant pricing variables, and hypotheses tests. Section 4 focuses on the obtained results, and Section 5 concludes. Appendix A, Appendix B and Appendix C provide a more detailed picture of the data and econometric model specification used in our study.

We proposed an empirical econometric panel data model to test deregulation and regional market structure effects on district heating prices in Finland from 1996 – 2002. In general, the results imply thatthe local structures of energy production and selling have an important role in the formation of retail market prices. The price lowering effects of energy market deregulation, which started in 1999, have been permanent. However, many fi rm speci fi c features, like CHP, heat and electricity joint selling, the fi rm being a part of a larger company, and the scale of production did not have expected retail price effects. Although the main empirical results obtained are robust, the large unobserved fi rm heterogeneity needs more attention in future research. In addition, unobserved time-varying effects need also more attention. The suggested permanent price trend shift due to market deregulation should be investigated by more detailed data and regulatory information provided by the Finnish Competition Authority. The results also showed a housing type dependency. For the small housedistrictheatmarkets,regionalanddistribution networksharing aspects are important, but for apartment houses they are not. How- ever, the market shares of local district heat production and selling fi rmscorrelatepositivelywithretailpricesforbothhousetypes.A fi rm sharing a distribution network with other companies has stronger pricing effects for fi rm speci fi c control variables than a non-sharing fi rm. From the policy perspective of market deregulation and industry restructuring, the results are encouraging. The electricity market re- structuring, which started in 1999 and affects district heating markets only indirectly, has lowered district house heating prices. At the same time, the market shares – especially in wholesale markets – still have price increasing effects. As the district heating markets are highly localized with vertical and horizontal integration market deregulation and industry restructuring may be impossible. Stronger regulation and market monitoring by the authorities may also be the only policy alternative in the future