عنوان انگلیسی
The analytic hierarchy and network processes: Applications to the US presidential election and to the market share of ski equipment in Italy
دانلود فوری مقاله + سفارش ترجمه 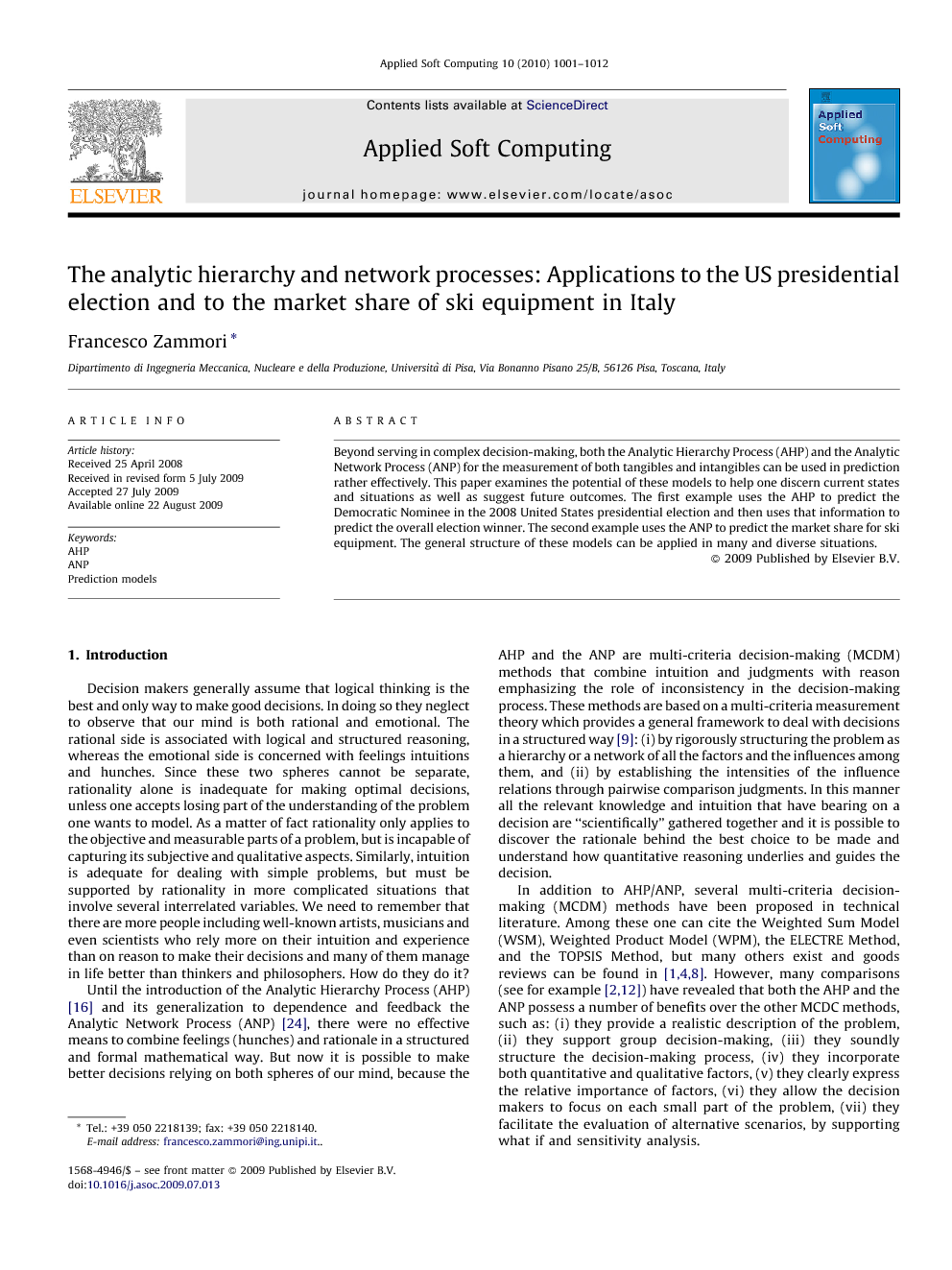 Beyond serving in complex decision-making, both the Analytic Hierarchy Process (AHP) and the Analytic Network Process (ANP) for the measurement of both tangibles and intangibles can be used in prediction rather effectively. This paper examines the potential of these models to help one discern current states and situations as well as suggest future outcomes. The first example uses the AHP to predict the Democratic Nominee in the 2008 United States presidential election and then uses that information to predict the overall election winner. The second example uses the ANP to predict the market share for ski equipment. The general structure of these models can be applied in many and diverse situations.

Decision makers generally assume that logical thinking is the best and only way to make good decisions. In doing so they neglect to observe that our mind is both rational and emotional. The rational side is associated with logical and structured reasoning, whereas the emotional side is concerned with feelings intuitions and hunches. Since these two spheres cannot be separate, rationality alone is inadequate for making optimal decisions, unless one accepts losing part of the understanding of the problem one wants to model. As a matter of fact rationality only applies to the objective and measurable parts of a problem, but is incapable of capturing its subjective and qualitative aspects. Similarly, intuition is adequate for dealing with simple problems, but must be supported by rationality in more complicated situations that involve several interrelated variables. We need to remember that there are more people including well-known artists, musicians and even scientists who rely more on their intuition and experience than on reason to make their decisions and many of them manage in life better than thinkers and philosophers. How do they do it? Until the introduction of the Analytic Hierarchy Process (AHP) [16] and its generalization to dependence and feedback the Analytic Network Process (ANP) [24], there were no effective means to combine feelings (hunches) and rationale in a structured and formal mathematical way. But now it is possible to make better decisions relying on both spheres of our mind, because the AHP and the ANP are multi-criteria decision-making (MCDM) methods that combine intuition and judgments with reason emphasizing the role of inconsistency in the decision-making process. These methods are based on a multi-criteria measurement theory which provides a general framework to deal with decisions in a structured way [9]: (i) by rigorously structuring the problem as a hierarchy or a network of all the factors and the influences among them, and (ii) by establishing the intensities of the influence relations through pairwise comparison judgments. In this manner all the relevant knowledge and intuition that have bearing on a decision are “scientifically” gathered together and it is possible to discover the rationale behind the best choice to be made and understand how quantitative reasoning underlies and guides the decision. In addition to AHP/ANP, several multi-criteria decision-making (MCDM) methods have been proposed in technical literature. Among these one can cite the Weighted Sum Model (WSM), Weighted Product Model (WPM), the ELECTRE Method, and the TOPSIS Method, but many others exist and goods reviews can be found in [1], [4] and [8]. However, many comparisons (see for example [2] and [12]) have revealed that both the AHP and the ANP possess a number of benefits over the other MCDC methods, such as: (i) they provide a realistic description of the problem, (ii) they support group decision-making, (iii) they soundly structure the decision-making process, (iv) they incorporate both quantitative and qualitative factors, (v) they clearly express the relative importance of factors, (vi) they allow the decision makers to focus on each small part of the problem, (vii) they facilitate the evaluation of alternative scenarios, by supporting what if and sensitivity analysis. As a matter of fact, the potentialities and the usefulness of both methods have been proved by many successful applications in virtually all the areas of management. Among others, interesting applications concern supplier selection [6] and [9], maintenance analysis [3], marketing analysis [29], supply chain management [28] and design optimization [26]. Literature in the subject matter is extensive and good reviews can be found in [5], [30] and [31]. Additionally, it is worth noting that, as shown in [7], [13], [14], [15], [17] and [19], beyond their common use as decision-making tools, the AHP and the ANP can also be used in prediction rather effectively. Since this interesting and useful aspect is less known, the main aim of this paper is to thoroughly examine the AHP and the ANP to give evidence of their capabilities to help one discerning current states and situations as well as suggesting possible future outcomes. As shown in [23] and [31], a way to validate the AHP/ANP and to show how intuition and feelings (supported by rationality and logic) can effectively capture the essence of a problem is to compare the results obtained through an AHP/ANP model, with something that is measurable and known. Therefore, two interesting applications are presented in this paper: in the first a hierarchic model is used to predict the winner of the US elections, and in the second a more complex network with dependence and feedback is used to estimate the market share of ski equipment in Italy without really knowing those values or using any known measurements in the process.

In this paper two interesting applications of the AHP/ANP have been presented. The first one concerns a hierarchy model used to predict the winner of the 2008 U.S. presidential election, while the secondoneconcernsanetworkmodelusedtoestimatetherelative market share of the main manufacturer of ski equipment in the Italian market. Through these examples we have given a global view of the AHP/ANP and have shown its credibility in dealing with complex real life decisions subjected to a diversity of influences. It is worth noting that the general theory of ANP permits to deals with even more general and complex problem that cannot be described by a single control criteria. Indeed, a general decision problem mayhave different merits ( i.e . benefits, opportunities, costs and risks) and each of them can be described in terms of several control criteria or sub-criteria such as economical, social and political. Therefore,developinganetworktoevaluateeachcontrolcriteria,it is possible to study the problem in a more general and comprehensive way, by taking into account all the possible influences that can affect the final solution.