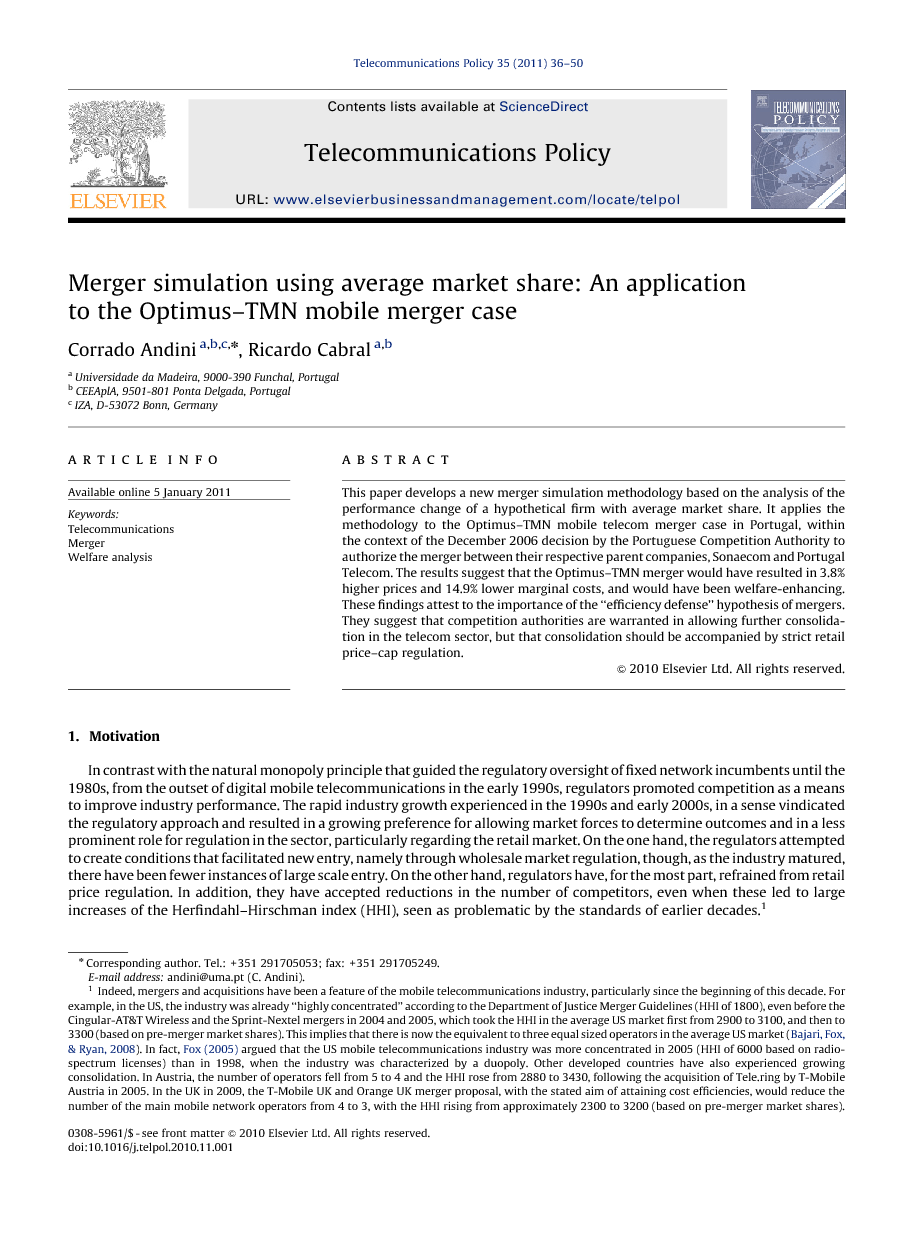 This paper develops a new merger simulation methodology based on the analysis of the performance change of a hypothetical firm with average market share. It applies the methodology to the Optimus–TMN mobile telecom merger case in Portugal, within the context of the December 2006 decision by the Portuguese Competition Authority to authorize the merger between their respective parent companies, Sonaecom and Portugal Telecom. The results suggest that the Optimus–TMN merger would have resulted in 3.8% higher prices and 14.9% lower marginal costs, and would have been welfare-enhancing. These findings attest to the importance of the “efficiency defense” hypothesis of mergers. They suggest that competition authorities are warranted in allowing further consolidation in the telecom sector, but that consolidation should be accompanied by strict retail price–cap regulation.

This paper uses an international sample of 177 mobile operators in 45 countries between 1Q99 and 2Q04 to evaluate the extent to which further industry concentration is driven by market power or efficiency gains. To do so, it develops a novel merger simulation methodology based on the pre- and post-merger change in the performance of a hypothetical firm with average market share. Unlike the now near-standard Baker–Bresnahan approach that assumes a given variation of marginal costs, the methodology proposed here allows the simulation of the effect of a merger on both prices and marginal costs, and the estimation of industry welfare effects. In addition, it avoids the potential bias introduced by incorrect post-merger estimatesofHHIusedinothermergersimulationmethodologies,sincethepost-mergeraveragemarketshareisknownwith certainty, whereas post-merger HHI is not. Finally, it has much lower data and computational requirements. These advantageshavetobebalancedagainstthelossofinformationthatresultsfromtheuseofaveragesinthemethodologythatis proposed in this article. In sum, the merger simulation methodology proposed here is a complementary approach that contributes to a more robust decision making process in merger review and appraisal. ThemethodologyisappliedtothemobilevoicecommunicationsmarketwithinthecontextoftheproposedSonaecom–PT merger,whichwasauthorizedbythePCAonthebasisoftheanalysisof46relevantmarkets,butwhichintheendfailedtoget stockholder approval for a change to PT’s shareholder bylaws. The results show large consumer’s surplus losses and large producer’s surplus gains. Nonetheless, it is found that the merger would have been welfare enhancing and it is argued that price–cap regulation would have been warranted. The analysis can be broadly construed as supporting the PCA decision to authorize the merger with respect to the mobile voice communications market, on efficiency grounds.These results have the following policy implications. First, they offer part support, on efficiency grounds, of past policy makers decisions to authorize further consolidation in this industry. However, they also suggest that further consolidation should be accompanied by price–cap regulation since it results in consumer’s surplus losses. In fact, the analysis of the Optimus–TMN merger case suggests that price–cap regulation would be welfare enhancing relative to a situation where the merger is authorized but no price caps are imposed. The finding that industry consolidation is welfare enhancing might bring into question the c urrent regulatory approach towards the mobile telecommunications sector. In particular, it su ggests that the relatively ‘‘hands-off’’ approach to retail price regulationinthissectormaynotbefeasiblegoingforward.Perdefinition,itisnotpossibletorelyoncompetitiontoensuremarket performancewhileatthesametimeallowingfurtherindustryconsolidation.Thissuggestsretailpriceregulationmayberequired. Alternatively,itmightsuggestthatregulatorsmightneedtocons iderbalancingthetrade-offbet weenefficiencyandthedegreeof competition in the industry. If so, further research of the underlying rationale is required. Finally, this paper, particularly when considered in combination with Gryzbowski and Pereira (2007) , which equally focused on the Optimus–TMN merger, offers pointed evidence on the important role of the ‘‘efficiency defense’’ clause in the regulatoryreviewprocessofmergerproposals( Williamson,1968 ).ItpointsoutthattheBaker–Bresnahanmergersimulation methodology, which assumes a given change in marginal costs, may under-estimate potential efficiency gains and therefore be biased towards the rejection of mergers.