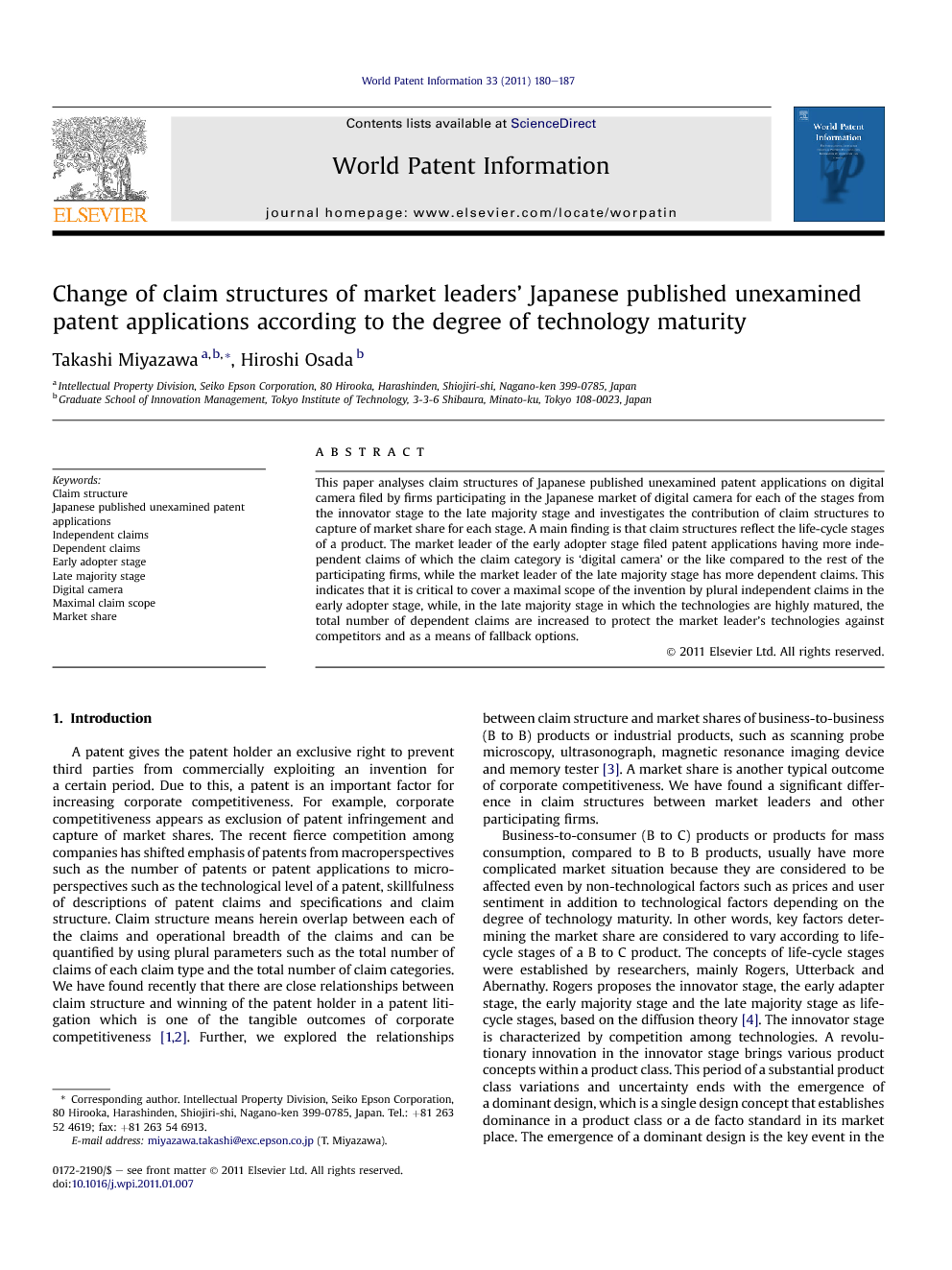 This paper analyses claim structures of Japanese published unexamined patent applications on digital camera filed by firms participating in the Japanese market of digital camera for each of the stages from the innovator stage to the late majority stage and investigates the contribution of claim structures to capture of market share for each stage. A main finding is that claim structures reflect the life-cycle stages of a product. The market leader of the early adopter stage filed patent applications having more independent claims of which the claim category is ‘digital camera’ or the like compared to the rest of the participating firms, while the market leader of the late majority stage has more dependent claims. This indicates that it is critical to cover a maximal scope of the invention by plural independent claims in the early adopter stage, while, in the late majority stage in which the technologies are highly matured, the total number of dependent claims are increased to protect the market leader’s technologies against competitors and as a means of fallback options.

A patent gives the patent holder an exclusive right to prevent third parties from commercially exploiting an invention for a certain period. Due to this, a patent is an important factor for increasing corporate competitiveness. For example, corporate competitiveness appears as exclusion of patent infringement and capture of market shares. The recent fierce competition among companies has shifted emphasis of patents from macroperspectives such as the number of patents or patent applications to microperspectives such as the technological level of a patent, skillfulness of descriptions of patent claims and specifications and claim structure. Claim structure means herein overlap between each of the claims and operational breadth of the claims and can be quantified by using plural parameters such as the total number of claims of each claim type and the total number of claim categories. We have found recently that there are close relationships between claim structure and winning of the patent holder in a patent litigation which is one of the tangible outcomes of corporate competitiveness [1] and [2]. Further, we explored the relationships between claim structure and market shares of business-to-business (B to B) products or industrial products, such as scanning probe microscopy, ultrasonograph, magnetic resonance imaging device and memory tester [3]. A market share is another typical outcome of corporate competitiveness. We have found a significant difference in claim structures between market leaders and other participating firms. Business-to-consumer (B to C) products or products for mass consumption, compared to B to B products, usually have more complicated market situation because they are considered to be affected even by non-technological factors such as prices and user sentiment in addition to technological factors depending on the degree of technology maturity. In other words, key factors determining the market share are considered to vary according to life-cycle stages of a B to C product. The concepts of life-cycle stages were established by researchers, mainly Rogers, Utterback and Abernathy. Rogers proposes the innovator stage, the early adapter stage, the early majority stage and the late majority stage as life-cycle stages, based on the diffusion theory [4]. The innovator stage is characterized by competition among technologies. A revolutionary innovation in the innovator stage brings various product concepts within a product class. This period of a substantial product class variations and uncertainty ends with the emergence of a dominant design, which is a single design concept that establishes dominance in a product class or a de facto standard in its market place. The emergence of a dominant design is the key event in the evolution of an industry, making the transition from that fluid state to a specific state [5] and [6]. This idea was supported and extended by Clark [7] and Henderson [8]. Dominant designs emerge across diverse product classes [8], [9], [10], [11], [12] and [13]. Dominant designs permit firms to design standardized and interchangeable parts and to optimize organizational processes for volume and efficiency [5] and [9]. After a dominant design emerges, technological progress is driven by numerous incremental innovations [14]. The focus of competition shifts from higher performance to lower cost and to differentiation via minor design variations and strategic positioning tactics [15]. The firms gain a better understanding of maintenance and reliability requirements through cumulative experience in manufacture of products incorporating the dominant designs. Meanwhile, users gain experience with the products. The emergence of a dominant design transforms the market landscape [6]. Products incorporating the dominant design win high market share. This study focuses on relationships between shares of digital camera market and claim structures of patent applications on digital camera and its associated technologies because digital camera is well-known to exhibit a typical evolutionary process of a B to C product [16], [17] and [18]. In 1995, Casio released QV-10, comprising a liquid crystal monitor, a finder, a memory and CCD. The launch price of QV-10 was reasonably set at 65,000 yen. This is recognized as the establishment of a dominant design or a de facto standard for digital camera. The market rose up and commenced to be enlarged rapidly. That year many of currently participating firms such as Fujifilm, Olympus and Kodak broke into the market and many models were released. Market leaders have exchanged several times since then. Hirata and Osada clarify the role of decision-making to gain competitive superiority in the market for each of the stages from the innovator stage to the late majority stage [16]. They also mention Moore’s chasm and propose guiding principles for overcoming a chasm based on analyses of firms’ attitudes toward the chasm between the early adopter stage and the early majority stage [19]. This study analyzes claim structures of Japanese published unexamined patent applications on digital camera and its technologies filed by firms participating in the market of digital camera for each stage and compares claim structures of market leaders with those of other participating firms for every stage. The paper is organized as follows: the next section outlines the data and methodology. Parameters used to analyze claim structure are also described. The parameters include the total number of independent claims. Independent claims are claims which stand on their own and do not quote any other claims. The third section presents results obtained by analyzing claim structures. A main finding is that features of claim structures of the market leaders vary with life-cycle stages. The market leader of the early adopter stage has more independent claims of which claim categories are products for sale, digital camera and the like, significantly than other participating firms. The fourth section deals with explanations for the obtained results. The last section summarizes our conclusions.

We have conducted analyses of claim structures of Japanese published unexamined patent applications fi led in the Japan Patent Of fi ce. This approach enables us to give a statistical picture of relationship between various parameters of patent claim and the degree of technology maturity or life-cycle stages. The picture of relationships reveals that optimization of claim structures suited to the degree of technology maturity or life-cycle stages can contribute to acquisition of a high market share. In the case of digital camera, the market leader of the early adopter stage has more independent claims in the category of a product for sale while the market leader of the late majority stage has more claims in total and dependent claims. This indicates that it is critical to cover a maximal scope of the invention by plural independent claims so as to capture high market share in the early adopter stage. In contrast, in the late majority stage, securing fallback options by more dependent claims and strengthening the fi rm ’ s core tech- nology are important to obtain high market share. In order to acquire a high market share after crossing over the chasm, non- technological factors which are not directly re fl ected in a patent application should also be improved.