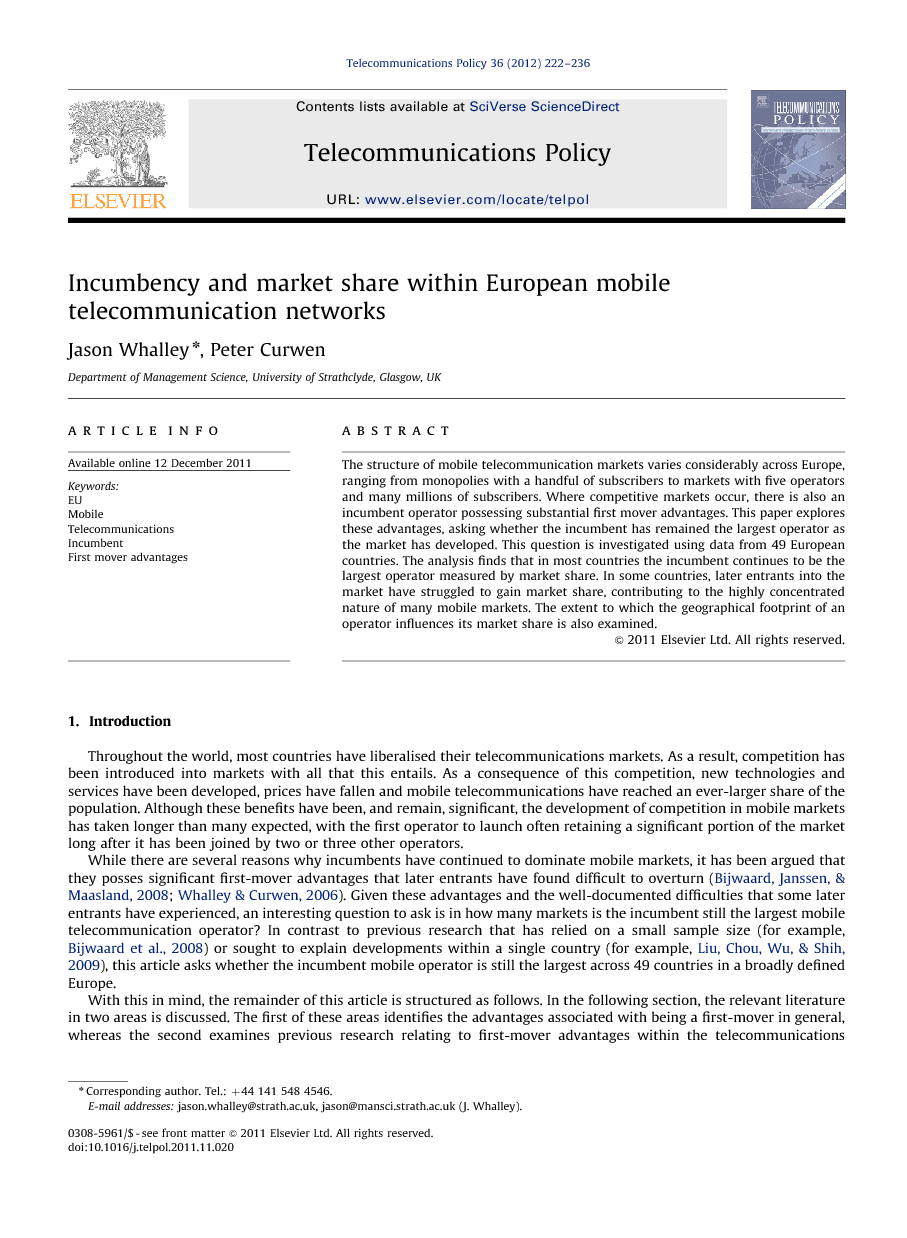 The structure of mobile telecommunication markets varies considerably across Europe, ranging from monopolies with a handful of subscribers to markets with five operators and many millions of subscribers. Where competitive markets occur, there is also an incumbent operator possessing substantial first mover advantages. This paper explores these advantages, asking whether the incumbent has remained the largest operator as the market has developed. This question is investigated using data from 49 European countries. The analysis finds that in most countries the incumbent continues to be the largest operator measured by market share. In some countries, later entrants into the market have struggled to gain market share, contributing to the highly concentrated nature of many mobile markets. The extent to which the geographical footprint of an operator influences its market share is also examined.

Throughout the world, most countries have liberalised their telecommunications markets. As a result, competition has been introduced into markets with all that this entails. As a consequence of this competition, new technologies and services have been developed, prices have fallen and mobile telecommunications have reached an ever-larger share of the population. Although these benefits have been, and remain, significant, the development of competition in mobile markets has taken longer than many expected, with the first operator to launch often retaining a significant portion of the market long after it has been joined by two or three other operators. While there are several reasons why incumbents have continued to dominate mobile markets, it has been argued that they posses significant first-mover advantages that later entrants have found difficult to overturn (Bijwaard et al., 2008 and Whalley and Curwen, 2006). Given these advantages and the well-documented difficulties that some later entrants have experienced, an interesting question to ask is in how many markets is the incumbent still the largest mobile telecommunication operator? In contrast to previous research that has relied on a small sample size (for example, Bijwaard et al., 2008) or sought to explain developments within a single country (for example, Liu, Chou, Wu, & Shih, 2009), this article asks whether the incumbent mobile operator is still the largest across 49 countries in a broadly defined Europe. With this in mind, the remainder of this article is structured as follows. In the following section, the relevant literature in two areas is discussed. The first of these areas identifies the advantages associated with being a first-mover in general, whereas the second examines previous research relating to first-mover advantages within the telecommunications industry. In Section 3, the sample and methodology adopted is outlined while in Section 4 the analysis is undertaken. The analysis is divided into two parts, covering firstly whether incumbents have remained the largest operator in their respective markets and, secondly, whether it is possible to discern any market share benefits from operating in contiguous markets. Conclusions are drawn in Section 5, and areas for future research are suggested.