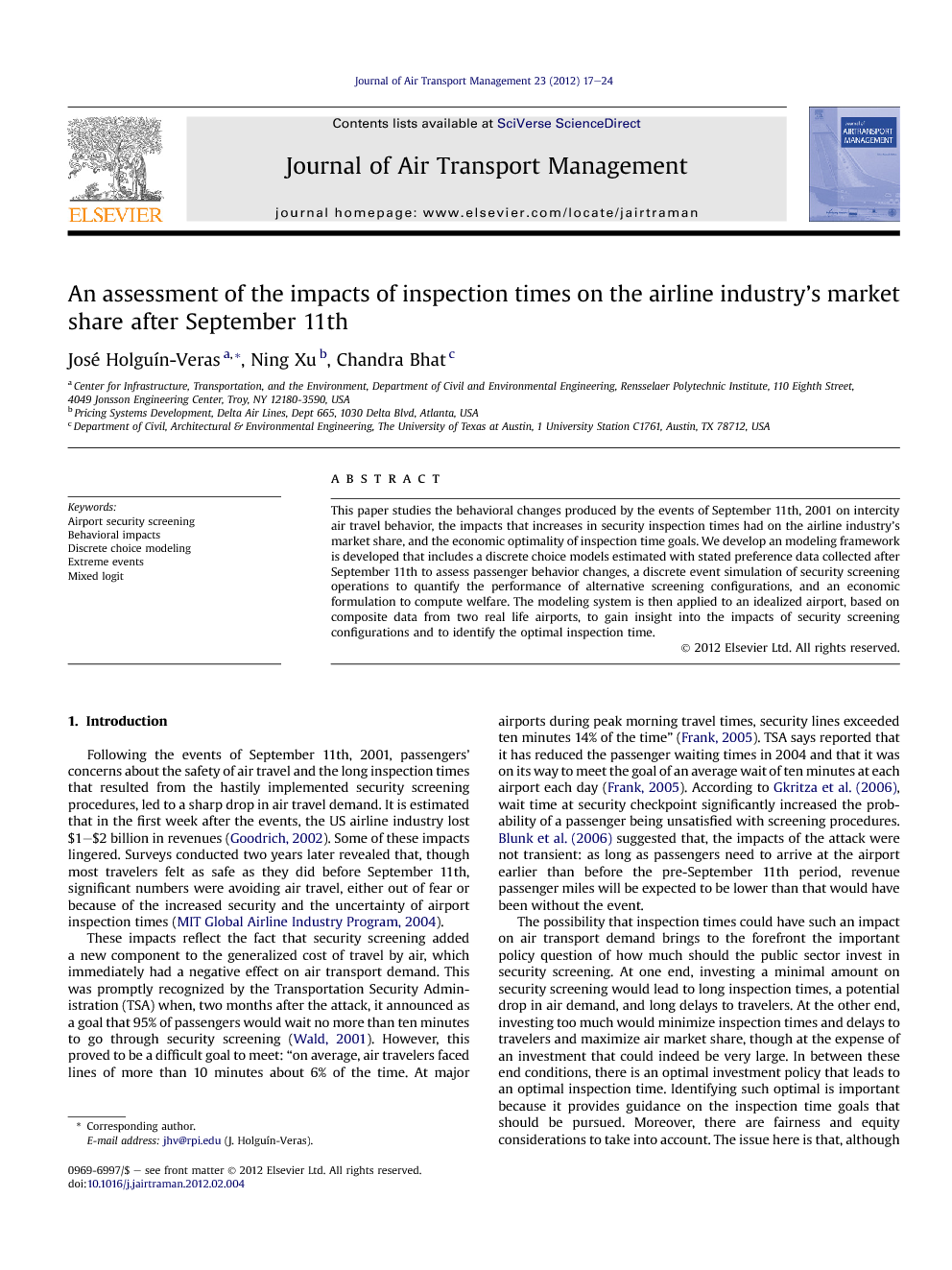 This paper studies the behavioral changes produced by the events of September 11th, 2001 on intercity air travel behavior, the impacts that increases in security inspection times had on the airline industry’s market share, and the economic optimality of inspection time goals. We develop an modeling framework is developed that includes a discrete choice models estimated with stated preference data collected after September 11th to assess passenger behavior changes, a discrete event simulation of security screening operations to quantify the performance of alternative screening configurations, and an economic formulation to compute welfare. The modeling system is then applied to an idealized airport, based on composite data from two real life airports, to gain insight into the impacts of security screening configurations and to identify the optimal inspection time.

Following the events of September 11th, 2001, passengers’ concerns about the safety of air travel and the long inspection times that resulted from the hastily implemented security screening procedures, led to a sharp drop in air travel demand. It is estimated that in the first week after the events, the US airline industry lost $1–$2 billion in revenues (Goodrich, 2002). Some of these impacts lingered. Surveys conducted two years later revealed that, though most travelers felt as safe as they did before September 11th, significant numbers were avoiding air travel, either out of fear or because of the increased security and the uncertainty of airport inspection times (MIT Global Airline Industry Program, 2004). These impacts reflect the fact that security screening added a new component to the generalized cost of travel by air, which immediately had a negative effect on air transport demand. This was promptly recognized by the Transportation Security Administration (TSA) when, two months after the attack, it announced as a goal that 95% of passengers would wait no more than ten minutes to go through security screening (Wald, 2001). However, this proved to be a difficult goal to meet: “on average, air travelers faced lines of more than 10 minutes about 6% of the time. At major airports during peak morning travel times, security lines exceeded ten minutes 14% of the time” (Frank, 2005). TSA says reported that it has reduced the passenger waiting times in 2004 and that it was on its way to meet the goal of an average wait of ten minutes at each airport each day (Frank, 2005). According to Gkritza et al. (2006), wait time at security checkpoint significantly increased the probability of a passenger being unsatisfied with screening procedures. Blunk et al. (2006) suggested that, the impacts of the attack were not transient: as long as passengers need to arrive at the airport earlier than before the pre-September 11th period, revenue passenger miles will be expected to be lower than that would have been without the event. The possibility that inspection times could have such an impact on air transport demand brings to the forefront the important policy question of how much should the public sector invest in security screening. At one end, investing a minimal amount on security screening would lead to long inspection times, a potential drop in air demand, and long delays to travelers. At the other end, investing too much would minimize inspection times and delays to travelers and maximize air market share, though at the expense of an investment that could indeed be very large. In between these end conditions, there is an optimal investment policy that leads to an optimal inspection time. Identifying such optimal is important because it provides guidance on the inspection time goals that should be pursued. Moreover, there are fairness and equity considerations to take into account. The issue here is that, although it would be appropriate for the public sector to invest if the benefits to society are larger than the investment made, investing tax payers resources in excess of the optimal would provide a subsidy to the airline industry and travelers, without concomitant economic benefits that justify the expense. Thus, the estimation of optimal inspection times requires finding the proper balance between the private interest and the cost of implementing security screening procedures. Achieving this goal requires assessing the impacts of alternative security screening scenarios on the key agents involved: airline industry, airports, homeland security agencies, and the traveling public. The objectives of these groups are not necessarily the same. From the standpoint of the airlines, the shorter the inspection times the better as this would enable them to enhance their competitive advantage over potential modal competitors, e.g., rail. Airports face a more nuanced situation because—though short inspection times increase their competitive edge over other airports and competing modes—they are likely to incur on long term infrastructure costs that may or may not be recovered from fees. In contrast, the traveling public is likely to side with the airlines in favor of the shortest possible inspection times, as this would minimize their delay costs. Finally, homeland security agencies—with a primary mission of maximizing security given their budget constraint—are themselves neutral in terms of inspection times, though they may face public pressure to minimize inspection times. However, since it is their responsibility to design and implement security screening procedures, they are the ones that must strive to implement optimal policies. In essence, there are two counteracting effects: the desire of airlines and customers to have the shortest possible inspection times, and the need to keep security inspection costs under control. The key policy question is what is the optimal value of inspection time, i.e., the one that maximizes economic welfare. The paper focuses on three interrelated things. First it identifies behavioral changes produced by September 11th on passengers’ mode choice. Second it quantifies the impacts of the security investment made after the event on the market share of the airline industry. Finally it determines the optimal inspection time.

We use a discrete choice model, a discrete event simulation, and an economic formulation to: assess the behavioral changes produced by September 11th, examine the role played by the investment in security screening in restoring the airline industry’s market shares, and estimate the (economic) optimal security screening investment. The discrete choice models show that the users’ valuation of travel time depends on who is paying for the trip, i.e., when the traveler’s company pays, users have a higher valuation of travel time (about three times higher) than when respondents are paying for the expenses themselves. In general, the modeling results are quite intuitive, and indicate that air travel was more adversely affected by September 11th than other modes. This is consistent with the fact that after September 11th people avoided traveling by air either out of fear, or because of the increased security and uncertainty of inspection times at airports. The discrete event simulations considered the case of a hypothetical commercial airport to estimate the inspection times for alternative security screening configurations. Construction, labor costs and present value of costs (PVCs) for different setups were estimated, as well as the market shares of the transportation modes considered. The computations indicate that the reduction of inspection times significantly increased the market share of the airline industry, and that reducing inspection times from two hours to ten minutes may have increased the airline’s market share from 32% to 49% for the intercity corridors considered. The computation of economic welfare suggests that the net present values (NPV) increase with reductions in inspection times, reaching a maximum value at about fifteen minutes. Thus, relaxing the TSA goal to fifteen minutes would increase economic welfare by 1% while saving $18 million/year-airport in inspection costs. Moreover, the NPV values for inspection times in the range of ten to twenty minutes are very close. The NPV for ten minutes ($120.05 million) is only 0.05% higher than the one for 20 minutes ($119.47 million), though it costs 29% more. The main implication of these results is that, taking into account the budget constraints typical of the public sector, a relaxation of the ten minutes goal to either fifteen or twenty minutes seems advisable.