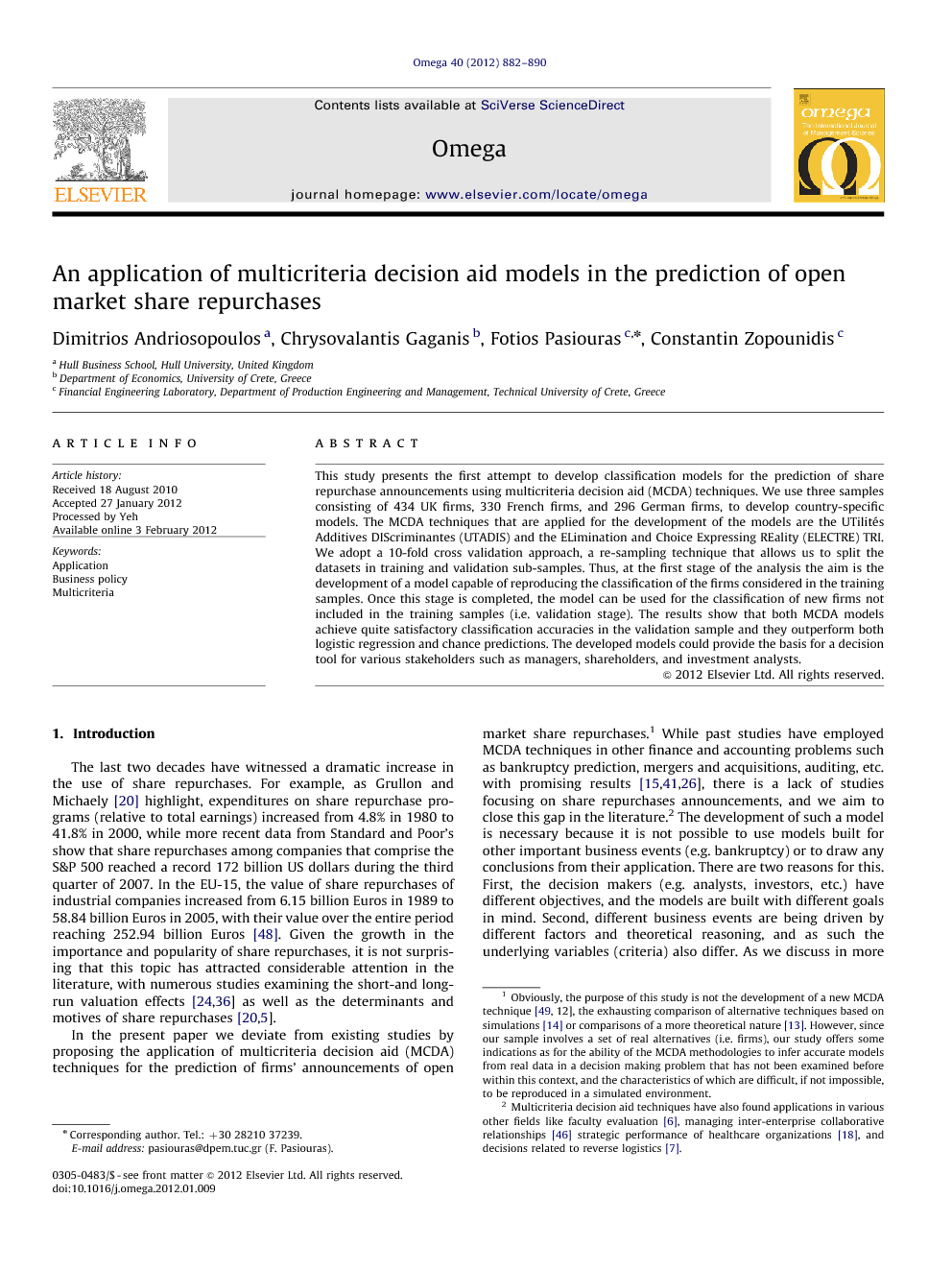 This study presents the first attempt to develop classification models for the prediction of share repurchase announcements using multicriteria decision aid (MCDA) techniques. We use three samples consisting of 434 UK firms, 330 French firms, and 296 German firms, to develop country-specific models. The MCDA techniques that are applied for the development of the models are the UTilités Additives DIScriminantes (UTADIS) and the ELimination and Choice Expressing REality (ELECTRE) TRI. We adopt a 10-fold cross validation approach, a re-sampling technique that allows us to split the datasets in training and validation sub-samples. Thus, at the first stage of the analysis the aim is the development of a model capable of reproducing the classification of the firms considered in the training samples. Once this stage is completed, the model can be used for the classification of new firms not included in the training samples (i.e. validation stage). The results show that both MCDA models achieve quite satisfactory classification accuracies in the validation sample and they outperform both logistic regression and chance predictions. The developed models could provide the basis for a decision tool for various stakeholders such as managers, shareholders, and investment analysts.

This research study contributes to the literature by providing an analysis of the ability of MCDA techniques to predict the likelihood of an open market share repurchase announcement. To examine the effectiveness of the models, we used three samples consisting of 434 UK firms, 330 French firms, and 296 German firms, half of which announced a share repurchase between 1997 and 2006. The models were developed using UTADIS and ELECTRE TRI, through a ten-fold cross-validation approach. Logistic regression was also employed for benchmarking purposes. The variables were selected on the basis of theoretical reasons and past studies in the repurchasing literature. To account for differences across countries we developed country specific models. Thus, three models for each country are developed, resulting in a total of 9 models. Our results indicated that the firm characteristics that can be useful in discriminating between the two groups of firms vary among countries which may be related to country-specific attributes that influence the managerial decisions with regards to share repurchases. We also found that these may differ across the methods used to develop the models. However, this is not surprising and it has been the case in past studies from other disciplines as well (e.g. prediction of acquisitions, bankruptcy prediction, etc.). For example, firm size appeared to be the most important variable in the three models developed through the ELECTRE TRI method as well as in the UTADIS-UK model, while at the same time it was one of the most important variables in the UTADIS models developed for Germany and France. In contrast, ROA was quite important in the UTADIS-UK model, while being considerably less important in the remaining models. As it concerns the classification ability of the models, the average results over the 10 replications in the validation set illustrated that all the models achieve quite balanced accuracies between the two groups and they performed better than a naïve model based on random assignment to outcomes based on prior probabilities (i.e. 50% in an equal sample). The highest overall accuracy among all the three sample countries was achieved in France. In this case, UTADIS managed to classify correctly approximately 8 out of the 10 firms, a performance that was slightly better than that of ELECTRE TRI. In contrast, in the case of the UK, it was ELECTRE TRI that performed slightly better than UTADIS. In general, the lowest accuracies were observed in the case of Germany, with the MCDA models achieving quite similar accuracies. The satisfactory performance of the MCDA models in the validation dataset illustrates that they could be used for the classification of any new firm not included in the training sample. For example, the developed models could be of use to various decision makers such as investment managers, firm managers, and stockholders, by providing objective information that can be prove useful in an initial screening of the firms. This could result in important savings in terms of time and money. Future research could extend the present study towards various directions such as the testing of the usefulness of the models in other countries, the employment of and comparison with alternative methods (i.e. support vector machines, neural networks, etc.), and the combination of MCDA and other methods into integrated models. It could also consider the use of non-financial variables (e.g. corporate governance) and the development of decision support systems.