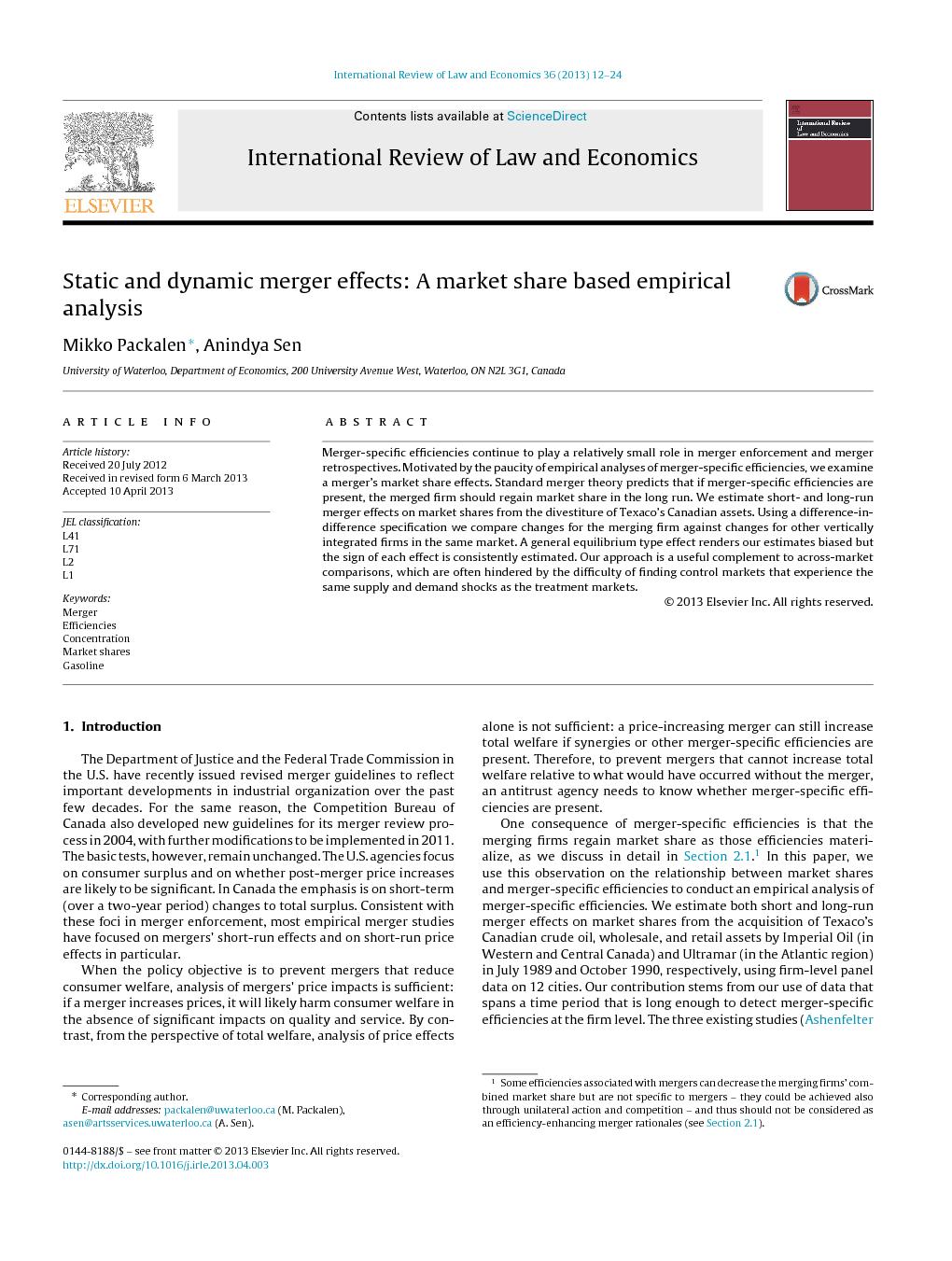 Merger-specific efficiencies continue to play a relatively small role in merger enforcement and merger retrospectives. Motivated by the paucity of empirical analyses of merger-specific efficiencies, we examine a merger's market share effects. Standard merger theory predicts that if merger-specific efficiencies are present, the merged firm should regain market share in the long run. We estimate short- and long-run merger effects on market shares from the divestiture of Texaco's Canadian assets. Using a difference-in-difference specification we compare changes for the merging firm against changes for other vertically integrated firms in the same market. A general equilibrium type effect renders our estimates biased but the sign of each effect is consistently estimated. Our approach is a useful complement to across-market comparisons, which are often hindered by the difficulty of finding control markets that experience the same supply and demand shocks as the treatment markets.

The Department of Justice and the Federal Trade Commission in the U.S. have recently issued revised merger guidelines to reflect important developments in industrial organization over the past few decades. For the same reason, the Competition Bureau of Canada also developed new guidelines for its merger review process in 2004, with further modifications to be implemented in 2011. The basic tests, however, remain unchanged. The U.S. agencies focus on consumer surplus and on whether post-merger price increases are likely to be significant. In Canada the emphasis is on short-term (over a two-year period) changes to total surplus. Consistent with these foci in merger enforcement, most empirical merger studies have focused on mergers’ short-run effects and on short-run price effects in particular. When the policy objective is to prevent mergers that reduce consumer welfare, analysis of mergers’ price impacts is sufficient: if a merger increases prices, it will likely harm consumer welfare in the absence of significant impacts on quality and service. By contrast, from the perspective of total welfare, analysis of price effects alone is not sufficient: a price-increasing merger can still increase total welfare if synergies or other merger-specific efficiencies are present. Therefore, to prevent mergers that cannot increase total welfare relative to what would have occurred without the merger, an antitrust agency needs to know whether merger-specific efficiencies are present. One consequence of merger-specific efficiencies is that the merging firms regain market share as those efficiencies materialize, as we discuss in detail in Section 2.1.1 In this paper, we use this observation on the relationship between market shares and merger-specific efficiencies to conduct an empirical analysis of merger-specific efficiencies. We estimate both short and long-run merger effects on market shares from the acquisition of Texaco's Canadian crude oil, wholesale, and retail assets by Imperial Oil (in Western and Central Canada) and Ultramar (in the Atlantic region) in July 1989 and October 1990, respectively, using firm-level panel data on 12 cities. Our contribution stems from our use of data that spans a time period that is long enough to detect merger-specific efficiencies at the firm level. The three existing studies (Ashenfelter and Hosken, 2008, Borenstein, 1990 and Coloma, 2002) that examine a merger's market share impacts all employ data that span only four or fewer years, rendering it unfeasible for those studies to examine whether the mergers in question resulted in merger-specific efficiencies in the long run. Within-market analyses of mergers’ market share impacts are an important complement to empirical merger analyses that focus on price effects and employ across-market comparisons. Within-market comparisons of price effects are not always feasible or meaningful (due to data constraints or product homogeneity), and across-market comparisons of price effects come with the caveat that only known supply and demand shocks can be accounted for – a point emphasized by Taylor and Hosken (2007) and Simpson and Taylor (2008) (of course, shocks that are common to all markets and shocks that are constant within a market over time are exceptions). Our ability to study both short- and long-run merger effects at the firm level is important because: (1) the gestation lag in absorbing merger-induced efficiencies may be considerable and (2) the general ambiguity regarding the optimal time span to assess merger impacts. In comparison, most studies have relied on four or fewer years of data and have focused on the price effect. We discuss the related empirical literature in Section 2.2. An additional appealing feature of our analysis is that the motivation for Texaco's exit was exogenous to local market characteristics as Texaco sold its Canadian assets to finance its long-running legal dispute with Pennzoil in the United States. This natural experiment type feature suggests a relatively clean opportunity to examine merger effects. The mergers were also of considerable scale. The number of national vertically integrated gasoline firms fell from four to three, and the mergers resulted in a significant increase in market concentration in most markets. Moreover, because regular grade gasoline is a relatively homogeneous product, comparisons across firms are more robust than in other industries. Our estimates from firm-level difference-in-difference specifications show that in the long run the mergers resulted in a decline in the merging firms’ combined market share relative to other vertically integrated firms in the same market, and that the magnitude of the long-run impact was much larger than the corresponding short-run effect. These findings are important as they demonstrate that dynamic (long-run) merger effects can be very different from static (short-run) merger effects, and that dynamic impacts do not necessarily arise through potential efficiencies created by mergers.2 In summary, we view our study to be a useful contribution given the relatively thin empirical literature on merger effects (noted by Ashenfelter, Hosken, & Weinberg, 2009). The benefits stem from developing and using an empirical approach that does not suffer from the same set of same caveats as the existing strategies, and from the parsity of ex-post investigations on how mergers benefit the merging firms in the long run.3