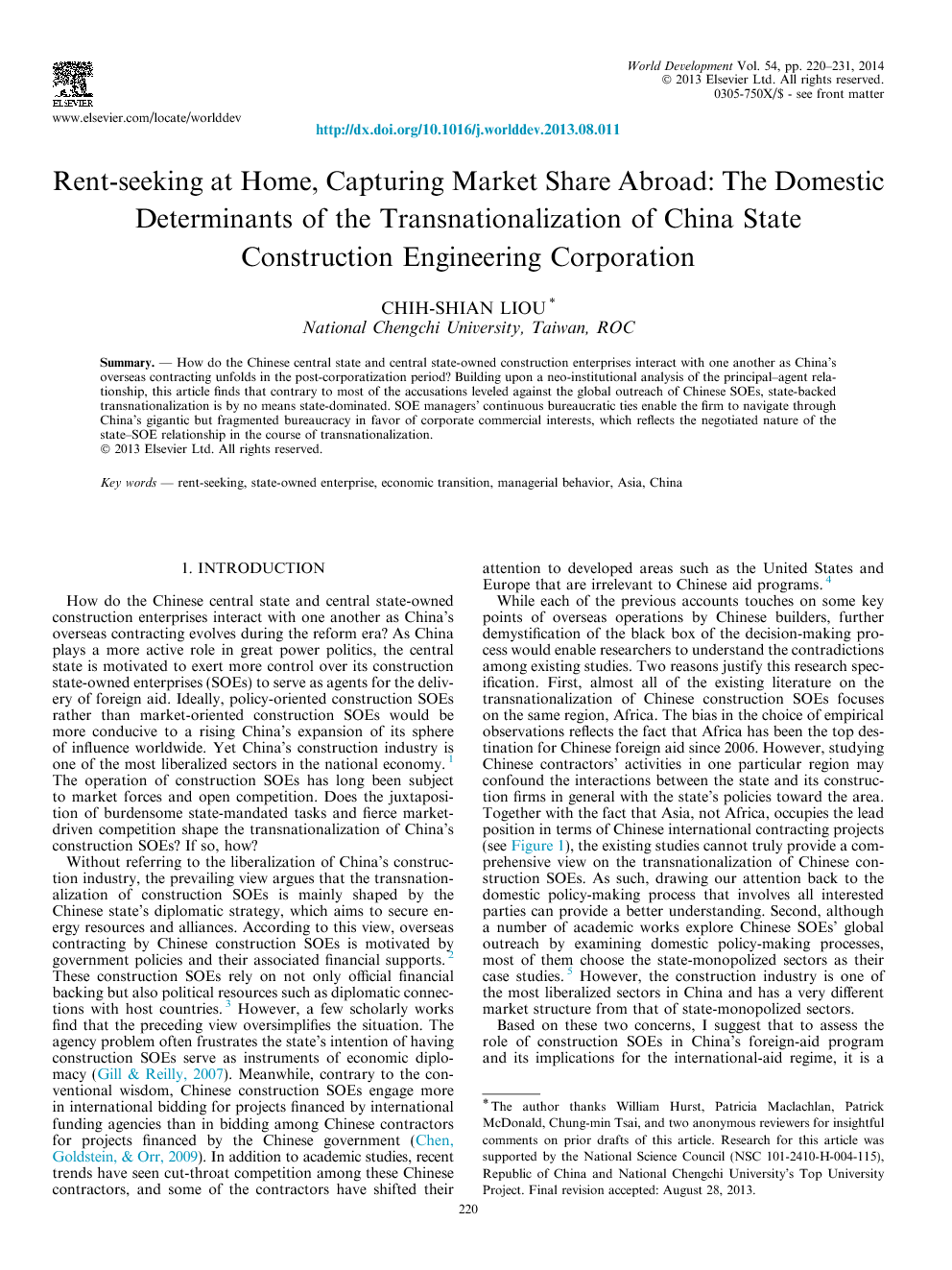 How do the Chinese central state and central state-owned construction enterprises interact with one another as China’s overseas contracting unfolds in the post-corporatization period? Building upon a neo-institutional analysis of the principal–agent relationship, this article finds that contrary to most of the accusations leveled against the global outreach of Chinese SOEs, state-backed transnationalization is by no means state-dominated. SOE managers’ continuous bureaucratic ties enable the firm to navigate through China’s gigantic but fragmented bureaucracy in favor of corporate commercial interests, which reflects the negotiated nature of the state–SOE relationship in the course of transnationalization.

How do the Chinese central state and central state-owned construction enterprises interact with one another as China’s overseas contracting evolves during the reform era? As China plays a more active role in great power politics, the central state is motivated to exert more control over its construction state-owned enterprises (SOEs) to serve as agents for the delivery of foreign aid. Ideally, policy-oriented construction SOEs rather than market-oriented construction SOEs would be more conducive to a rising China’s expansion of its sphere of influence worldwide. Yet China’s construction industry is one of the most liberalized sectors in the national economy.1 The operation of construction SOEs has long been subject to market forces and open competition. Does the juxtaposition of burdensome state-mandated tasks and fierce market-driven competition shape the transnationalization of China’s construction SOEs? If so, how? Without referring to the liberalization of China’s construction industry, the prevailing view argues that the transnationalization of construction SOEs is mainly shaped by the Chinese state’s diplomatic strategy, which aims to secure energy resources and alliances. According to this view, overseas contracting by Chinese construction SOEs is motivated by government policies and their associated financial supports.2 These construction SOEs rely on not only official financial backing but also political resources such as diplomatic connections with host countries.3 However, a few scholarly works find that the preceding view oversimplifies the situation. The agency problem often frustrates the state’s intention of having construction SOEs serve as instruments of economic diplomacy (Gill & Reilly, 2007). Meanwhile, contrary to the conventional wisdom, Chinese construction SOEs engage more in international bidding for projects financed by international funding agencies than in bidding among Chinese contractors for projects financed by the Chinese government (Chen, Goldstein, & Orr, 2009). In addition to academic studies, recent trends have seen cut-throat competition among these Chinese contractors, and some of the contractors have shifted their attention to developed areas such as the United States and Europe that are irrelevant to Chinese aid programs.4 While each of the previous accounts touches on some key points of overseas operations by Chinese builders, further demystification of the black box of the decision-making process would enable researchers to understand the contradictions among existing studies. Two reasons justify this research specification. First, almost all of the existing literature on the transnationalization of Chinese construction SOEs focuses on the same region, Africa. The bias in the choice of empirical observations reflects the fact that Africa has been the top destination for Chinese foreign aid since 2006. However, studying Chinese contractors’ activities in one particular region may confound the interactions between the state and its construction firms in general with the state’s policies toward the area. Together with the fact that Asia, not Africa, occupies the lead position in terms of Chinese international contracting projects (see Figure 1), the existing studies cannot truly provide a comprehensive view on the transnationalization of Chinese construction SOEs. As such, drawing our attention back to the domestic policy-making process that involves all interested parties can provide a better understanding. Second, although a number of academic works explore Chinese SOEs’ global outreach by examining domestic policy-making processes, most of them choose the state-monopolized sectors as their case studies.5 However, the construction industry is one of the most liberalized sectors in China and has a very different market structure from that of state-monopolized sectors.Based on these two concerns, I suggest that to assess the role of construction SOEs in China’s foreign-aid program and its implications for the international-aid regime, it is a prerequisite to understand the domestic background against which the reform of these firms has evolved. This article thus adopts a neo-institutional analysis of the principal–agent relationship between the Chinese central state and its construction firms to explain Chinese construction SOEs’ corporate strategy during the period of transnationalization—rent-seeking at home while capturing market share abroad. By studying the China State Construction Engineering Corporation (CSCEC), this article argues that the transnationalization of Chinese construction SOEs during the post-corporatization period reflects more the firms’ corporate strategy than the state’s policy objectives. It is the domestic market structure, not national foreign-aid programs, which drives construction SOEs’ transnationalization. Contrary to Chinese reformers’ expectations, pro-competition reforms actually made Chinese construction SOEs more inclined to utilize non-market leverage to compete in an increasingly open market. After all, political influence is a firm-specific competitive advantage for bureaucracy-connected construction SOEs. Habitual rent-seeking behavior together with the pressure to meet financial standards set by the State-owned Assets Supervision and Administration Commission of the State Council (SASAC) motivate construction SOEs to negotiate with a fragmented bureaucracy in favor of corporate interests. A case study on CSCEC can be used for understanding Chinese construction SOEs because of its top position in the industry. In addition to its status as the largest construction SOE in the domestic market, CSCEC is the first among five Chinese vertically integrated construction companies that entered the list of the top 225 international contractors, which is compiled by the Engineering New-Record (ENR). 6 This is the result of CSCEC’s leading role in carrying out China’s foreign-aid program. Examining the transformation of CSCEC’s operation strategy from a “diplomatic arrangement” (waijiao buju) to a “commercial arrangement” (shangye buju) will contribute to a more comprehensive grasp of China’s foreign behavior in the realm of political economy. This article begins with the reform measures of China’s construction industry, which created the institutional environment that shapes the incentive structures of the actors involved. It then examines firm-level behavior in response to institutional changes brought about by the reform. Special attention is given to CSCEC managers’ conduct in their effort to balance their political and economic interests within a transition economy in which the Chinese Communist Party (CCP) still dominates their career prospects. The next section analyzes how this interaction between the party-state and managers determined the transnationalization of the CSCEC. The article concludes with the issue of incompatibility between managerial political and economic roles and the implications for the political economy of development.

With the progress of the “Going Out” (Zouchuqu) strategy, 42 the increasing global presence of Chinese ventures has captured worldwide attention. It is commonly believed that the transnationalization of Chinese SOEs is a coordinated state action, neglecting the role of firms in making business decisions. Contrary to popular belief, this article finds that the state-backed “Going Out” strategy is far from state-dominated, and my principal–agent analysis of CSCEC’s transnationalization fleshes out the “negotiated nature of the state–SOE relationship.” Regarding SOE managers, this article finds that their administrative ranks and associated bureaucratic connections are powerful bargaining chips when navigating through China’s gigantic bureaucracy to get away with pursuing firms’ financial interests. What is the implication of such findings for the development of host countries? I would argue that politically powerful and commercially driven Chinese SOEs hardly bring sustainable development to host countries as China’s foreign aid programs promise. Being the major agents of China’s foreign aid programs, construction SOEs are heavily involved in the development of infrastructure in developing markets such as Africa and Southeast Asia. Yet, without proper regulations from both host countries and the home country, these firms just replicate their domestic operational modes in overseas projects—i.e., blind expansion at the expense of project quality. Moreover, numerous negative trends associated with the unreasonable bidding wars adopted by most Chinese construction SOEs have begun to emerge recently, such as failure to complete projects by their bidding prices and tender collusion, etc. 43 This is by no means a welcome development to decision-makers in Beijing who worry about the adverse impact on China’s relationships with the host countries. 44 In addition to the implications for host country development, I would also argue that a strong public ownership sector that is capable of bargaining and negotiating over the terms of state regulations will become an obstacle to Chinese reformers’ expectations of more sustainable development with equity. The SOE reform agenda after China’s entry into the World Trade Organization puts the Chinese state at the core position to engineer economic growth by assigning a dominant role to public ownership. Pei (2006) and Huang (2008) present a large body of evidence that such a development model inevitably encounters the issue of corruption as the state’s grabbing hand continues to be empowered. While concurring with their observations, my study further implies that the competitiveness gap between the public and private sectors in China is exponentially enlarged. Such a development need not be a worrying concern as long as the SOE sector performs its distributional role in society. Unfortunately, Chinese reformers have made slow progress with the reform of the dividend policy, and by any standard the dividend payouts from Chinese SOEs are very low, which help little in filling holes in the social safety net and wealth gap. Over the course of economic reform, Chinese reformers mindfully retained strategic assets under public ownership for the sake of the CCP’s political interests. The incorporation of SOE managers into the state cadre system provides the state with a primary channel through which to ensure the fulfillment of SOEs’ political function. Such personnel control, as identified by many China scholars, builds the groundwork for the reign of the CCP (Shambaugh, 2008). It also suggests strong state interference in SOEs’ corporate affairs—not simply because the state can remove SOE managers from their positions in the firms, but more importantly because the state has the final say about managerial career prospects along the party/bureaucratic ladder. Yet when the preceding personnel appointment system is examined in the context of economic reform intended to foster SOEs’ commercial interests, the relationship between the state and SOEs becomes more complex than any existing literature on the transnationalization of the Chinese SOE sector will acknowledge. As I have elaborated through the case study of CSCEC, while the selection of SOE senior management is subject to the nomenklatura system, the ensuing managerial administrative ranks actually give them considerable bureaucratic leverage to bargain with policymakers. With bureaucratic positions that are equivalent to central regulators, senior managers in CSCEC make every effort to protect the firm’s market privilege gained from partial economic reform. This tendency becomes even more apparent when SOE managers’ economic performance becomes increasingly important in deciding their career advancement. In the language of principal–agent relationships, this institutional arrangement suggests that agent SOE managers are bestowed equal bargaining power to evade principal regulators’ monitoring. Seen from this light, the state’s control over SOEs in China’s authoritarian political system is not as tight as one might expect. The state’s grip on SOEs’ operations is further weakened by the conflicting interests of the many bureaucratic agencies connected to the SOEs, frustrating the emergence of a consistent regulatory framework. In the meantime, China’s half-way economic reform has invited resource misallocation and price distortion in the marketplace, providing fertile ground for managerial rent-seeking. From this institutional environment comes an apparent paradox. The personnel appointment system designed to control SOE managers suggests that effective monitoring of SOEs’ operations is nearly impossible. This dilemma is an institutional embodiment of the incompatibility between SOEs’ political and economic functions. It is against this backdrop that the transnationalization of SOE operations was initiated. Consequently, any meaningful analysis of international ventures by Chinese SOEs must seriously take into account the domestic conditions under which these firms operate.