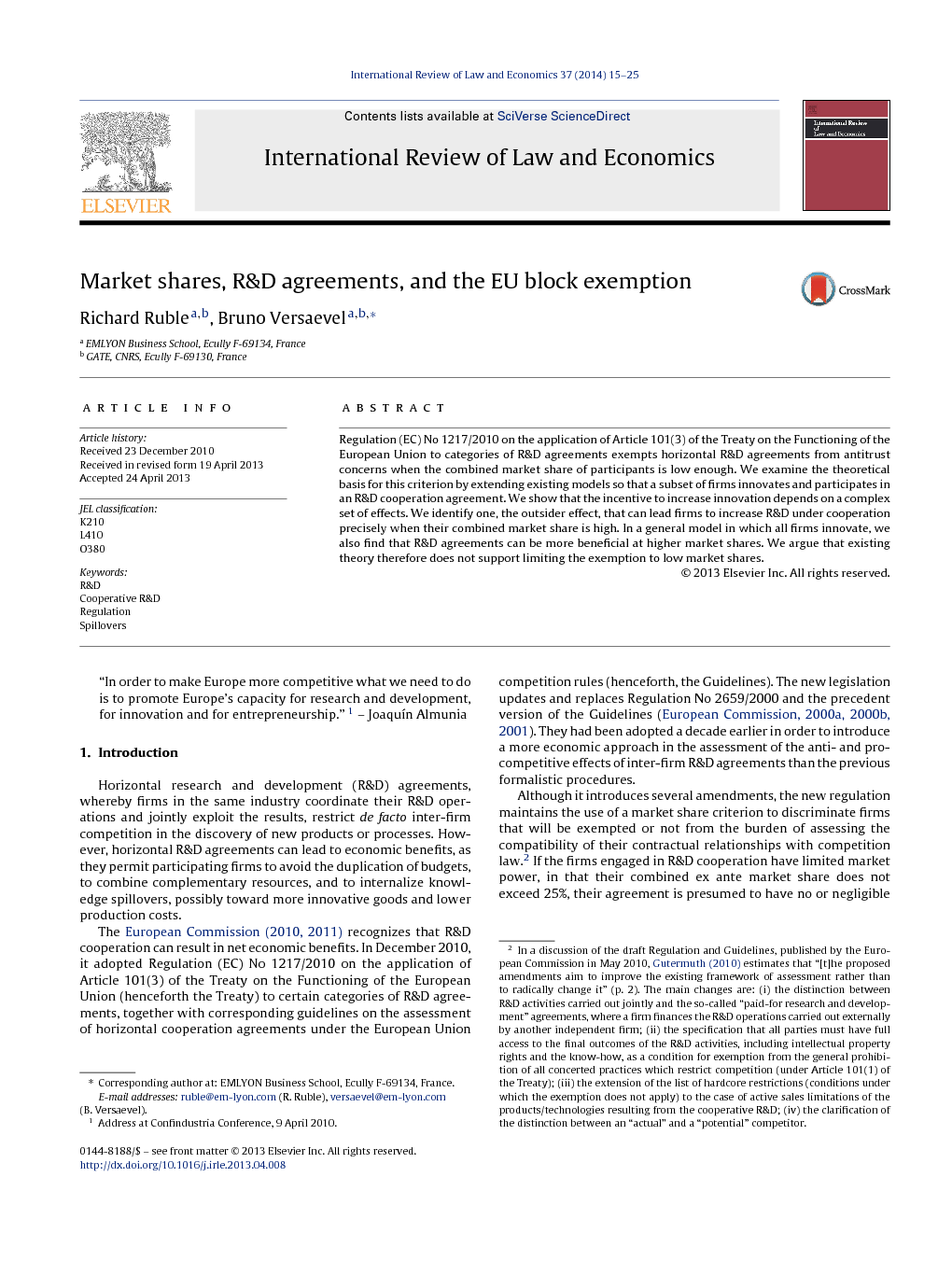 Regulation (EC) No 1217/2010 on the application of Article 101(3) of the Treaty on the Functioning of the European Union to categories of R&D agreements exempts horizontal R&D agreements from antitrust concerns when the combined market share of participants is low enough. We examine the theoretical basis for this criterion by extending existing models so that a subset of firms innovates and participates in an R&D cooperation agreement. We show that the incentive to increase innovation depends on a complex set of effects. We identify one, the outsider effect, that can lead firms to increase R&D under cooperation precisely when their combined market share is high. In a general model in which all firms innovate, we also find that R&D agreements can be more beneficial at higher market shares. We argue that existing theory therefore does not support limiting the exemption to low market shares.

Regulation (EC) No 1217/2010, and the Guidelines, reflect the laudable objective to make consumers benefit from the virtues of R&D cooperation, while filtering out arrangements that may not pass on benefits to consumers. By introducing a market share criterion, so that only firms with limited sales may collaborate in R&D within “safe harbours”, the regulation penalizes the technological collaboration of larger suppliers. When firms have a high combined market share, horizontal R&D agreements take place in a more uncertain legal environment. The parties bear the burden of self-assessing the compatibility of their contractual relationships vis-à-vis the legislation. They face the risk of incurring pecuniary sanctions, in addition to unrecoverable costs in case of infringement and subsequent automatic annulment of the agreement. Our message is that, by focusing too closely on the competition dimension via market shares, the regulation loses sight of the raison d’être of the R&D block exemption. In order to test the regulation from a theoretical economic viewpoint, we have extended standard models of R&D cooperation to a framework with cooperating innovators and imitators. For several specifications of the impact of R&D on existing products and/or processes, we have established that the connection between the combined market shares of cooperating firms and the benefit of R&D to consumers is not univocal. In fact, it can be the opposite of what the regulation seems to assume. More specifically, under R&D cooperation agreements, participating firms internalize a negative externality that we have identified as the outsider effect. In our model, this negative externality – which leads to reduced R&D under cooperation – is lower when the cooperating firms have higher ex ante market shares. When spillovers are in R&D inputs, and imitation is sufficiently strong, the likelihood that cooperation benefits consumers increases with the innovators’ combined market share. The latter is thus not a good predictor of the social desirability of agreements. Moreover, in a general model in which all firms conduct R&D, we have also found no strong support for the market share criterion. Another possible motivation for the use of a market share criterion, that we have not studied in this paper, relates to the restriction of competition on the final market (and not only in R&D efforts), as made easier by R&D cooperation. Martin, 1995 and Martin, 1997 and Cabral (2000) demonstrate that R&D joint ventures can facilitate collusion in the marketing of goods in the formal context of two-firm models. With more than two firms, if the impact on the economy is more negative when the colluding parties have high market power ex ante, then the 25% threshold could be rationalized as a precautionary mechanism that systematically puts the most harmful potential colluders under scrutiny. However, the exact connection between the ex ante combined market share of firms engaged in R&D cooperation and the likelihood that they participate simultaneously in a price fixing or quantity reducing agreement remains to be investigated. A recent empirical study by Goeree and Helland (2010) in the US environment has found that a shift in antitrust policy (the revision of the leniency program by the Department of Justice in 1993), which specifically aimed at deterring final market collusion, reduced significantly the probability that a firm joins a R&D joint venture in the telecommunications industry. This result suggests that some past R&D agreements were indeed motivated by non-technological considerations. It also indicates that collusive behavior can be dealt with successfully with dedicated instruments. In terms of policy implications, our analysis thus calls for both simplification and specialization. The simplification of the R&D block exemption by withdrawing the market share criterion would eliminate the disincentives to R&D cooperation faced by large firms. In that case the regulation would be specialized,35 with the objective of making consumers benefit from R&D cooperation, leaving aside the detection and prosecution of welfare-reducing behavior to other specialized competition rules.