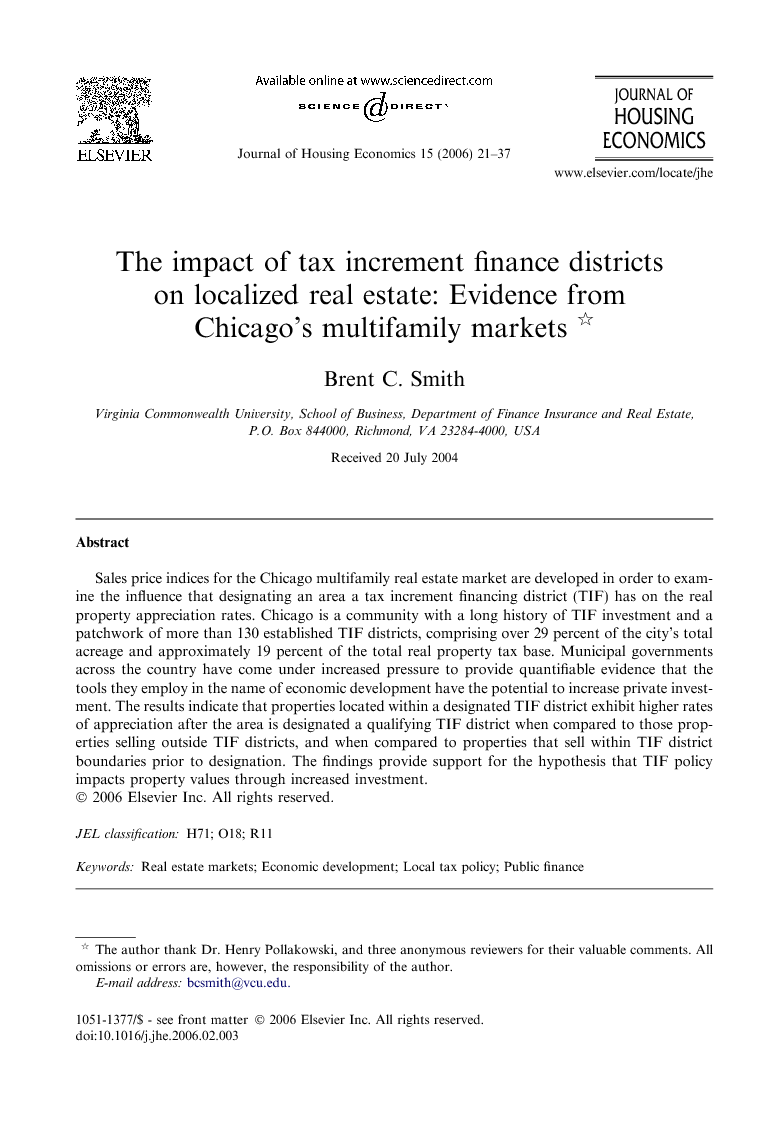 Sales price indices for the Chicago multifamily real estate market are developed in order to examine the influence that designating an area a tax increment financing district (TIF) has on the real property appreciation rates. Chicago is a community with a long history of TIF investment and a patchwork of more than 130 established TIF districts, comprising over 29 percent of the city’s total acreage and approximately 19 percent of the total real property tax base. Municipal governments across the country have come under increased pressure to provide quantifiable evidence that the tools they employ in the name of economic development have the potential to increase private investment. The results indicate that properties located within a designated TIF district exhibit higher rates of appreciation after the area is designated a qualifying TIF district when compared to those properties selling outside TIF districts, and when compared to properties that sell within TIF district boundaries prior to designation. The findings provide support for the hypothesis that TIF policy impacts property values through increased investment.

Tax increment financing (TIF) is one of the predominant economic development policies utilized by municipalities in the United States for fostering market-based urban renewal (Man, 2001 and Weber et al., 2003). Originating in California in 1952, TIF has been accepted by 49 states and the District of Columbia (excludes Arizona) and is employed extensively in California, Colorado, Florida, Illinois, Indiana, Minnesota, and Wisconsin. Minnesota has more than 2000 TIF districts, among them its Mall of America. The Chicago metropolitan area has more than 400 and Kansas City 50. The goals of TIF are broad and include eliminating blight, retaining businesses, spawning new businesses, developing a skilled labor force, stabilizing the localized economy, and stimulating new jobs within the TIF district. There has been extensive research on the process and administration of TIFs with the dominant focus on the “but for question” (i.e., private investment would not have occurred were it not for the stimulus provided by public investment in the TIF district) (Brueckner, 2001). There have been far fewer studies examining the impacts of TIF on the local real estate market on which the TIF investments are dependent. The research contained in this article comprehensively examines the impact of TIF designation by municipal government on the local real estate market utilizing recorded sales of attached, single-family (multifamily) properties over the period 1992 through 2000. The study area is the city of Chicago, Illinois. Comparisons are made between the rate of appreciation in multifamily properties and their proximity to a TIF district.1 Consideration is given to structural factors, neighborhood/locational characteristics, and date of sale. The central hypotheses assert that properties located within a designated TIF district will exhibit higher rates of appreciation after the area is designated a qualifying TIF district when compared to those properties outside TIF districts and when compared to properties located within TIF district boundaries that sell prior to designation. As TIF district designation expands across the country it has become increasingly important for policymakers, investors, and citizens to evaluate whether TIFs have the potential to successfully stimulate tax resources sufficient to offset the expenditures in public investment. In no instance there has been comprehensive research on the impacts of TIF adoption on localized real estate markets with adjustments to recognize influences within geographic submarkets of observed transactions. In this study, for the first time, individual real estate transactions are observed and analyzed over time in an attempt to isolate the contributing influence of TIF designation on local economies. The remainder of this article is divided into the following sections. The next section provides a brief background on TIFs with discussion on the study area of Chicago, Illinois. The literature on TIF impacts is then outlined. That is followed by an introduction to the empirical modeling procedure, the variables to be employed, and the sources of data. The findings from the analysis and the implications for TIF district designation conclude the article.

In summary, the model suggests that TIF designation does have a positive relationship with the market for real estate as exhibited by the Chicago multifamily market over the period of observation. Appreciation rates within TIF districts exceeded those of properties outside TIF boundaries, and the designation of TIF districts stimulates market value increases in areas that are ultimately designated TIF districts. This is the first time a microlevel study has been conducted on the impact of TIF designation on the market for residential real estate. The positive results obtained from this analysis are enhanced by the fact that TIFs are designated in areas that are not financially viable investments and typically do not stimulate private investment with appreciation. If, for example, there is little or no transaction activity in TIF district areas prior to designation and if existing properties are not appreciating, then a rate of appreciation similar to that of the rest of the market would be considered a positive. A word of caution is warranted in the interpretation of the results. There is the very real possibility of sample selection bias in the data. It is possible the observations from the TIF districts are dominated by those properties within the area that are marketable, leaving the low value units out of the story. This would clearly threaten the validity of the results. Unfortunately, there is not sufficient information in the dataset to confirm or deny this form of selection bias. A difference of means tests was performed on the data divided by year and no significant differences in the sample were observed. Tax increment financing tends to be controversial, and the Chicago experience is no exception. TIF can be a powerful tool for neighborhood development, adding cash flow for public infrastructure improvements that in many cities is made available only to downtown developments. In addition to ongoing questions of property appreciation, there are a host of positive and negative dimensions of the TIF experience that should be mentioned. The economic base of the municipality and the neighborhood may be strengthened by private economic development that would not have taken place without the TIF incentive. Tax increment financing promotes economic development without tapping into general funds or levying special assessments on property owners. By floating bonds backed by anticipated revenues from the development, municipal taxes are essentially held harmless. Notwithstanding these issues, municipalities are ill prepared to undertake major redevelopment without access to major public infrastructure financing. TIF appears to be a viable tool for both city center development and neighborhood redevelopment in areas where private investment is otherwise absent. Comparisons with different property types would represent a useful expansion of this analysis, and the anatomy and relationship between socio-demographic condition and TIF adoption would greatly expand the current knowledge base on a growing public policy tool.