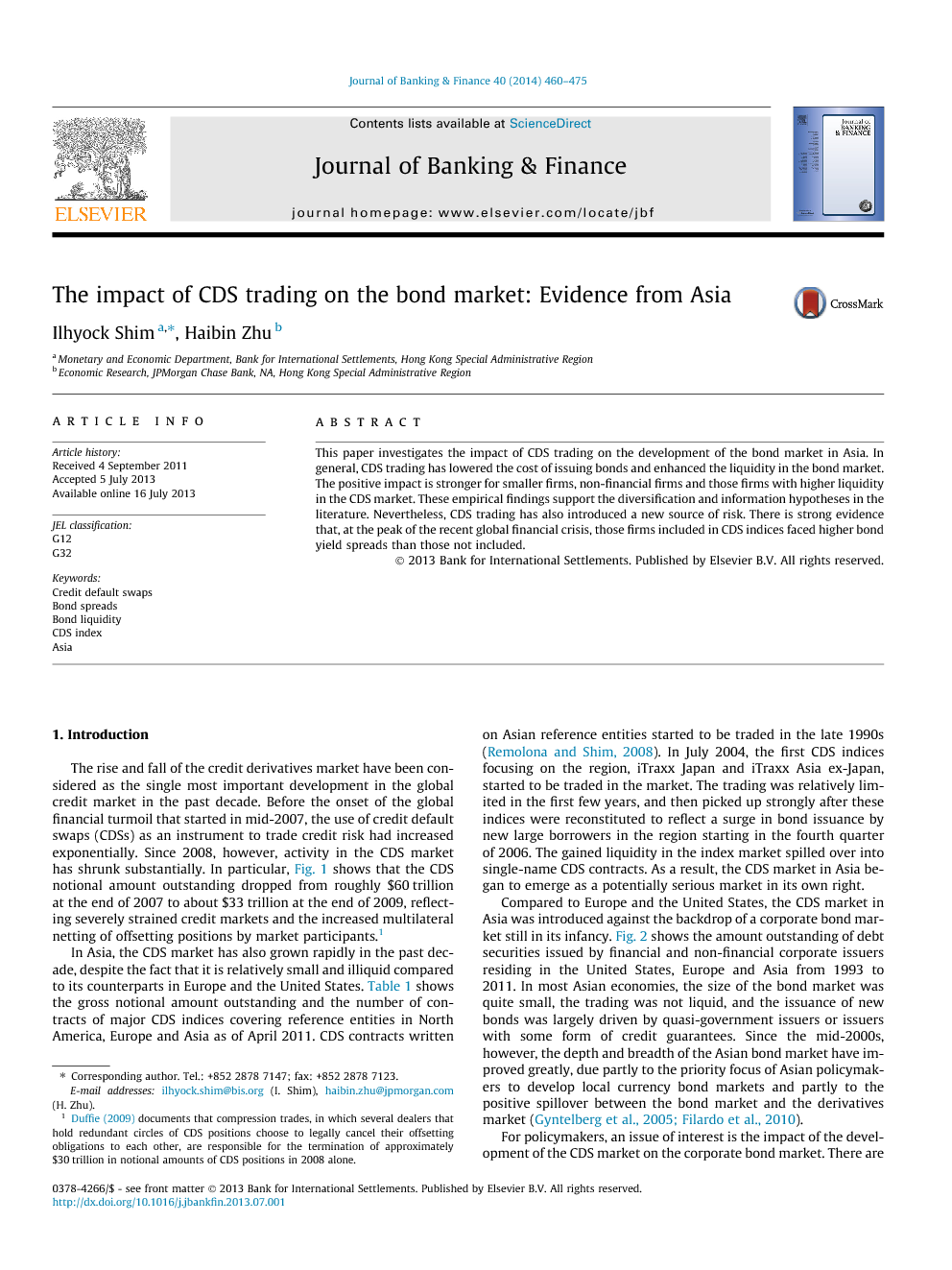 This paper investigates the impact of CDS trading on the development of the bond market in Asia. In general, CDS trading has lowered the cost of issuing bonds and enhanced the liquidity in the bond market. The positive impact is stronger for smaller firms, non-financial firms and those firms with higher liquidity in the CDS market. These empirical findings support the diversification and information hypotheses in the literature. Nevertheless, CDS trading has also introduced a new source of risk. There is strong evidence that, at the peak of the recent global financial crisis, those firms included in CDS indices faced higher bond yield spreads than those not included.

This paper shows that in Asia, CDS trading has had positive impacts on bond market development in terms of lowering average spreads and enhancing the market liquidity before and in the early stage of the recent international financial crisis. This finding supports the diversification and information hypotheses, and justifies continued development of active CDS markets in the region. For financial regulators, the sequencing problem, i.e., the order in which various financial markets should be developed, is an important issue (Chami et al., 2010). Historically, derivatives markets have been introduced well after the development of the market for the underlying securities. Once derivatives become available, dealers and bond holders can hedge their exposures much more easily and efficiently. In addition, derivatives facilitate the pricing of instruments by making it easier to repackage risks and exploit arbitrage opportunities. This makes the holding of bonds more attractive and contributes to the development of secondary markets in the underlying bonds. Also, as the experience of derivatives on US government bonds shows, the existence of derivatives can significantly increase the liquidity of the market for the underlying bonds and encourage development of the bond market. Regulators might consider promoting development of the CDS market, so that the CDS market continues to lower the costs and increase liquidity in the bond market. However, we also find that at the peak of the financial crisis, the CDS market contributed to higher spreads in the bond market. Given that the CDS market plays the role of shock amplifier during the crisis, it is important to make sure that policymakers introduce measures to mitigate the negative spillover effect from the CDS market to the bond market. Rapid growth and lax supervision of the CDS market up to 2007 have raised a number of policy concerns. The current regulatory reform initiatives on the CDS market aim at reducing systemic risk and providing additional transparency in the credit derivatives market. Most discussions have focused on how to reduce systemic risk stemming from the widespread use of CDS contracts traded in the over-the-counter (OTC) market. The Financial Stability Board and the Group of Twenty have picked up this issue, and agreed to require that all standardised CDS contracts trade in principle through central counterparties (CCPs) or exchanges. The US Treasury Department decided to require all standard credit default swaps to be traded through a CCP, and a similar undertaking is being contemplated in Europe. The current discussion seems to focus on financial stability benefits. Trading through CCPs has certain advantages over trading in OTC markets. Counterparty risk and settlement risk are important considerations in OTC markets, whereas CCPs can limit delivery failures by requiring accounts to be marked-to-market and by enforcing margin or collateral requirements. Nevertheless, as Stulz (2010) suggests, the use of clearing houses is not a panacea for eliminating systemic risk associated with OTC trading of derivatives. Also, clearing houses are inefficient at dealing with most new financial products and customised derivatives. The OTC market is better at enabling innovation, at addressing specific derivatives requirements from end-users, and at finding counterparties when liquidity for a derivative on an exchange is low. By contrast, exchanges are more efficient when there is a large volume of trading for standardised contracts. In this sense, as emphasised by Duffie (2009), it is important to improve price transparency and efficiency in the credit derivatives market. Trading through CCPs could be helpful in achieving this objective. However, given that the credit market, including the CDS market, is relatively less developed in Asia, the optimal strategy for setting up CCPs remains an open issue. To this end, a continued discussion is warranted to strike the right balance between maintaining the stability of the CDS markets and promoting efficient and liquid CDS markets in Asia.