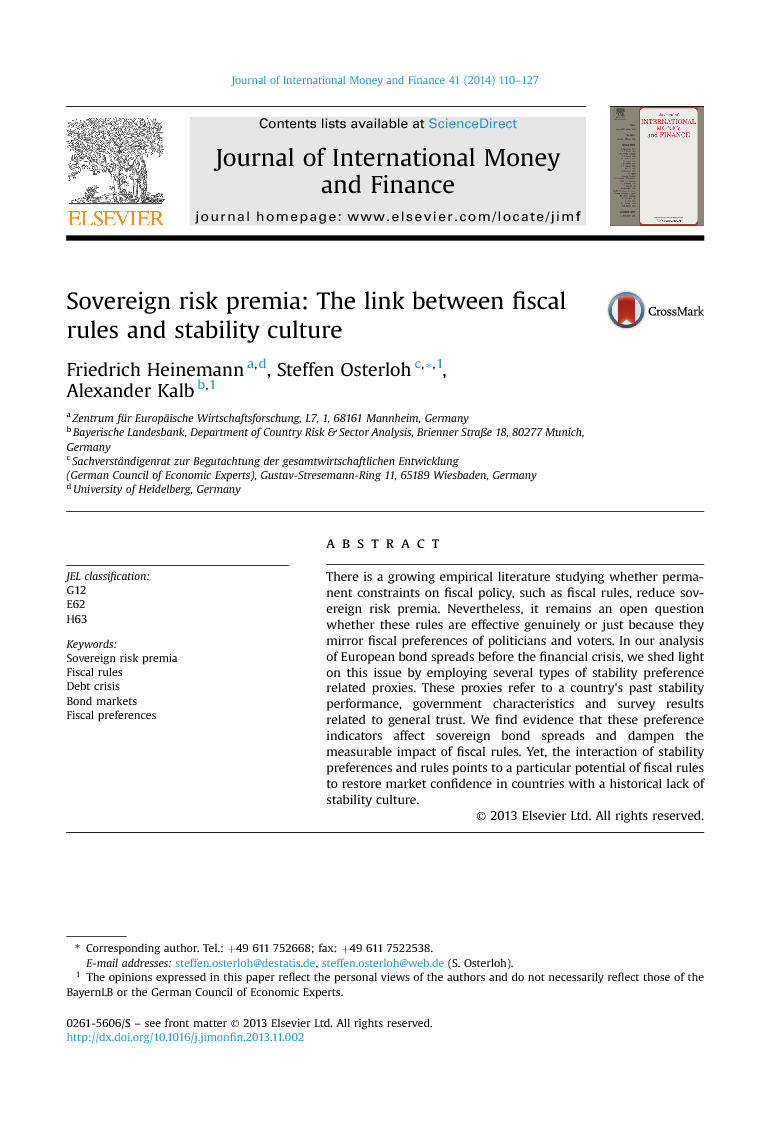 There is a growing empirical literature studying whether permanent constraints on fiscal policy, such as fiscal rules, reduce sovereign risk premia. Nevertheless, it remains an open question whether these rules are effective genuinely or just because they mirror fiscal preferences of politicians and voters. In our analysis of European bond spreads before the financial crisis, we shed light on this issue by employing several types of stability preference related proxies. These proxies refer to a country's past stability performance, government characteristics and survey results related to general trust. We find evidence that these preference indicators affect sovereign bond spreads and dampen the measurable impact of fiscal rules. Yet, the interaction of stability preferences and rules points to a particular potential of fiscal rules to restore market confidence in countries with a historical lack of stability culture.

The credibility crisis regarding the sustainability of public debt has transformed the markets for government bonds in the Euro area. A new sensitivity of creditors for the risk of sovereign default has pushed up financing costs of several euro member countries or has even cut them off from market access. This fundamental change in risk awareness has multiplied the interest rate costs associated with a deteriorating fiscal position. Politics have reacted in various ways ranging from drastic consolidation efforts over European emergency credit lines to the search for a framework for orderly defaults. Apart from these approaches, one strategy is to establish fiscal reputation in the short term through measures which improve the long-term sustainability of public finances. In this context, important actors like the Commission's president José Manuel Barroso or the German chancellor Angela Merkel have called for a “new stability culture” in Europe,2 which is supposed to reassure the bond markets about the new reliability of consolidation strategies and a brighter fiscal future. A crucial question in this context is, of course, to which extent ‘stability culture’ can swiftly be changed by politicians or legislators. The answer depends on the precise definition since this term has at least two connotations. First, it can be related to the rules which constrain a country's fiscal policy. Second, it may point to long run fiscal preferences of citizens and/or politicians as well as national institutional characteristics, which are a heritage of a country's history. Both dimensions are fundamentally distinct. Whereas preferences can hardly be changed through short-run political measures, fiscal rules are open for such adjustments. Currently, policy makers try to foster fiscal reputation through the establishment of better European and national fiscal rules. In particular, the Fiscal Compact which was agreed by the European Heads of State of Government in December 2011 prescribes that all participating countries (all EU member states without the United Kingdom and the Czech Republic) will have to introduce national fiscal rules by the end of 2013 (European Central Bank, 2012). These rules have to be introduced in the national legislation, preferably in the form of constitutional provisions, and they have to fulfil certain requirements, in particular they have to limit the structural deficit of the general government at 0.5% of GDP. The hope is that, independent from the current budgetary performance, such fiscal rules send out credible signals and cut short the way towards lowering the risk spread. Indeed, there is some empirical evidence in the context of US states, EU countries or Swiss cantons that properly designed fiscal rules can actually reduce risk spreads (see survey below). The available empirical evidence, however, is limited to the rules-dimension of stability culture so that all conclusions are necessarily preliminary. The essential problem is that these rules may reflect stability oriented preferences of a country's voters and politicians and, thus, the effect of fiscal rules on risk premia can be a result of a common-cause-interdependence: Conservative fiscal preferences might have led both to the establishment of rules and to lower risk premia. This criticism is well known from the literature on the effectiveness of fiscal rules (Poterba, 1996): A correlation of strict fiscal rules and low public deficits cannot necessarily be interpreted causally. Voters who dislike public debt will also favour strict debt limits. If this is the case, the observed fiscal link between rules and fiscal policy outcomes could be spurious. This methodological problem is of immediate policy relevance. A new rule as such does not change preferences, in particular if it is established as a consequence of external pressure. If the markets rather pay attention to preferences than to written rules, they could remain sceptical vis-à-vis a high debt country. Rules which seem to work in one country might then fail in another. Hence, we have to address different empirical questions: First, is the establishment of fiscal rules largely driven by stability-oriented preferences? Second, does the impact of fiscal rules on risk premia survive if fiscal preferences are taken into account through appropriate proxies? And third, could fiscal rules have a different impact in countries with high and low stability preferences? Thus, it is the key objective of our contribution to integrate the stability culture dimension into the study of risk premium determinants in Europe before the financial crisis and to address the questions above. Specifically, we want to understand how both dimensions of stability culture – rules and preferences – influence government bond risk premia and how they interact. The paper is structured as follows: In a first step, we give a brief overview of the relevant literature including the few studies explicitly devoted to the issue of stability culture and fiscal performance. In the empirical section, we first check the robustness of the (one-dimensional) link between rules and risk premia in Europe. Afterwards, we include different proxies for a country's stability culture to shed light on the impact of these proxies and their interaction with the effect of fiscal rules on risk premia.

Have fiscal rules really had a genuine impact on risk premia in the past, even if they have been highly correlated with a country's general stability orientation? And could new fiscal rules in high debt countries contribute to a build-up of fiscal reputation? Our results indicate that there may be a negative answer to the former and a positive answer to the latter question. There appears to be a correlation between strict rules and stability preferences in the past. Countries with lower risk premia have benefitted both from an anti-debt consensus in the population and from stricter fiscal rules. Furthermore, our results indicate that these stability-oriented countries would not have had a significantly lower financial market reputation if they had not established fiscal rules. Thus, for these countries strict fiscal rules may be rather interpreted as another indicator which reflects the underlying fiscal preferences of the voters and their political representatives. Still, even if this is true, it does not preclude the possibility that the new establishment of strict rules is relevant for fiscal reputation in countries with a lack of historical stability orientation. Our results rather reflect the fact that these countries found it difficult to establish these rules by themselves in ‘normal times’. However, in the course of the crisis several member states introduced new fiscal rules and after 2013 all member states of the euro area will be obliged to have national rules which comply with the guidelines established in the Fiscal Compact. One could argue that the introduction of these rules was the result of external pressure: either due to the pressure of the financial markets (Spain, Italy) or of the European partners, since the ratification of the Fiscal Compact was a prerequisite to be eligible for future bail-out funding through the newly established European Stability Mechanism (ESM). An essential result of our interaction analysis is that fiscal rules nevertheless have the largest potential to restore financial market confidence for countries with particularly poor revealed stability preferences in the past. There is already some evidence from federal states that even if rules are introduced through ‘external pressure’, one can still expect positive effects from their introduction. These recent empirical findings demonstrate that sub-national fiscal rules can indeed be effective in increasing fiscal soundness even when they are not introduced ‘voluntarily’ by a lower level but imposed by the central government (Grembi et al., 2012; for Italian municipalities; Foremny, 2011; for European regions). Our results may be regarded as further evidence along these lines and, hence, cast a cautiously optimistic light at the Fiscal Compact and its possible contribution to building a better fiscal reputation of European member countries.