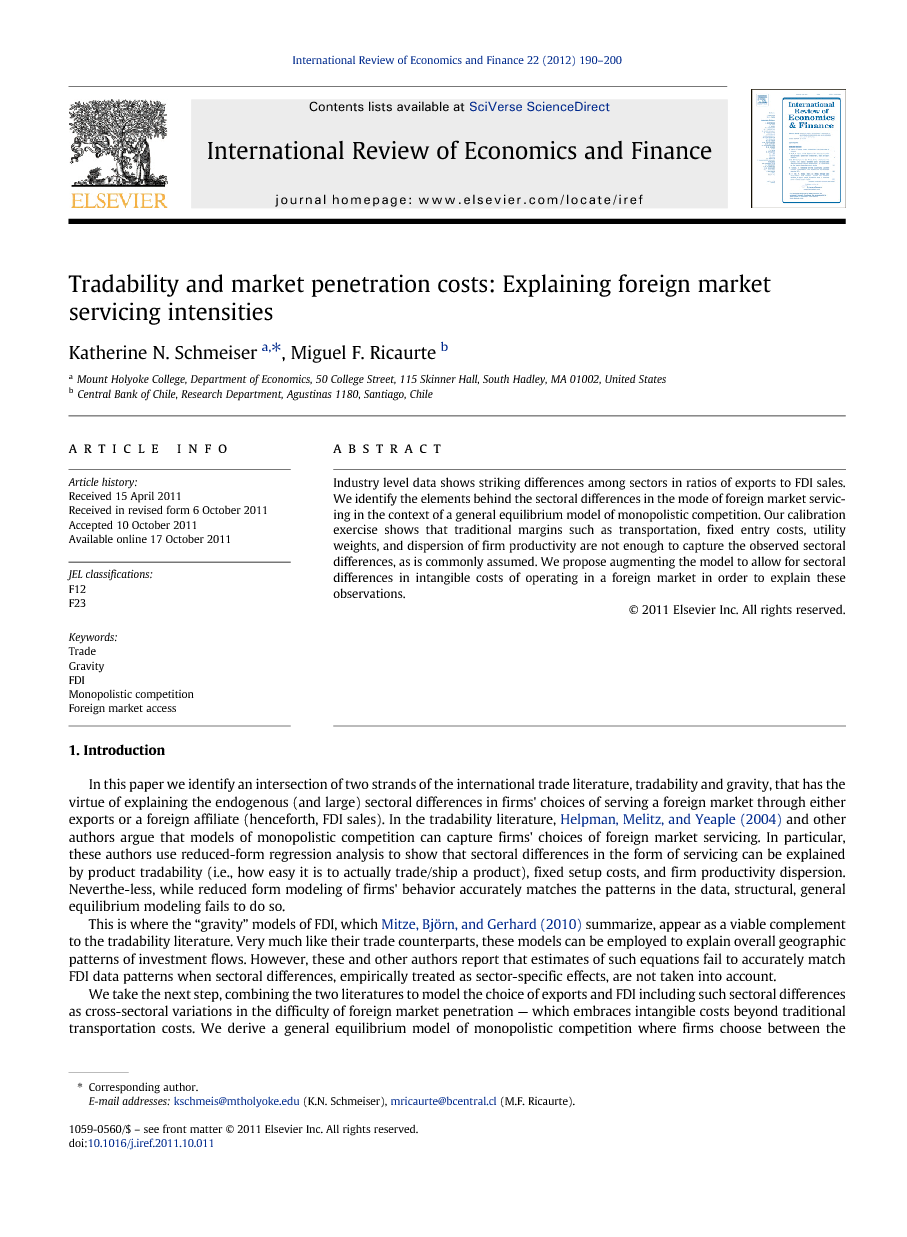 Industry level data shows striking differences among sectors in ratios of exports to FDI sales. We identify the elements behind the sectoral differences in the mode of foreign market servicing in the context of a general equilibrium model of monopolistic competition. Our calibration exercise shows that traditional margins such as transportation, fixed entry costs, utility weights, and dispersion of firm productivity are not enough to capture the observed sectoral differences, as is commonly assumed. We propose augmenting the model to allow for sectoral differences in intangible costs of operating in a foreign market in order to explain these observations.

In this paper we identify an intersection of two strands of the international trade literature, tradability and gravity, that has the virtue of explaining the endogenous (and large) sectoral differences in firms' choices of serving a foreign market through either exports or a foreign affiliate (henceforth, FDI sales). In the tradability literature, Helpman, Melitz, and Yeaple (2004) and other authors argue that models of monopolistic competition can capture firms' choices of foreign market servicing. In particular, these authors use reduced-form regression analysis to show that sectoral differences in the form of servicing can be explained by product tradability (i.e., how easy it is to actually trade/ship a product), fixed setup costs, and firm productivity dispersion. Neverthe-less, while reduced form modeling of firms' behavior accurately matches the patterns in the data, structural, general equilibrium modeling fails to do so. This is where the “gravity” models of FDI, which Mitze, Björn, and Gerhard (2010) summarize, appear as a viable complement to the tradability literature. Very much like their trade counterparts, these models can be employed to explain overall geographic patterns of investment flows. However, these and other authors report that estimates of such equations fail to accurately match FDI data patterns when sectoral differences, empirically treated as sector-specific effects, are not taken into account. We take the next step, combining the two literatures to model the choice of exports and FDI including such sectoral differences as cross-sectoral variations in the difficulty of foreign market penetration — which embraces intangible costs beyond traditional transportation costs. We derive a general equilibrium model of monopolistic competition where firms choose between the options of exports and FDI. Calibrating the model, we find that a measure of tradability in conjunction with costs in the spirit of gravity can determine the sector-level ratios of exports to FDI sales. We call these new costs foreign market penetration costs. The study of this problem requires acknowledging the fact that firms' interactions with each other can be analyzed from different angles. Traditionally foreign direct investment (FDI) has been defined as either “horizontal” (when the entire production process is duplicated in order to sell goods abroad) or “vertical” (fragmenting the production process across national borders). This dichotomous choice has been shown to be empirically too restrictive (for example, see Feinberg and Keane, 2006 and Neary, Mar 2009) as firms tend to participate in more hybrid forms of FDI hence, we abstract from horizontal or vertical FDI. Following this, for our purposes we suggest sales can be represented within a horizontal and intra-firm FDI framework. Fig. 1.1a shows the relationship between the transportation cost (which represents freight and tariff costs, as explained in Section 3) and the ratio of exports to FDI sales from the U.S. to Canada (omitting the outlier sector of Petroleum and Coal Products). It is evident that, while sectors with higher transport cost tend to be FDI sales intensive, no definite relationship between the form-of-service ratio and the transportation cost exists. Moreover, Fig. 1.1b shows there is no direct relationship between the transportation cost and total sector sales. It is evident that the explicit transportation cost of goods is not sufficient to explain the sectoral differences reported. Additionally, we find that alternative sectoral differences explored in the empirical literature (productivity dispersion, fixed costs, and consumer utility weights) perform less successfully in a theoretical framework. This suggests that alternative sectoral costs such as marketing costs, contracting concerns, and government incentives might be important. We show that with a broader definition of foreign market operation costs – which we refer to as the difficulty of foreign market penetration – the explanatory power of models of monopolistic competition is improved. Most similar to our theoretical approach, Helpman et al. (2004) extends the Melitz (2003) model to allow firms to choose between servicing the “local” market only and servicing local and foreign markets, the latter done through two alternative channels: exports and foreign affiliates (henceforward referred to as FDI). Within the FDI choice literature, however, there are many who acknowledge the importance of sectoral determinants. Most notably, Antràs (2003) constructs an incomplete contracting model where final goods firms decide whether to purchase components from a vertically integrated supplier or at arm's length. This is done to explain why the share of intra-firm imports in total U.S. imports is significantly higher the higher the capital intensity of the exporting industry. Yeaple (2006) further shows that a higher degree of sectoral productivity dispersion can be associated with more FDI within that sector.1 Finally, sectoral differences have been shown to be a key component in explaining FDI patterns in the gravity literature. Empirical estimates of gravity-type equations fail to accurately match FDI data patterns when sectoral differences in foreign investment, treated as sector-specific effects, are not taken into account. For example, Toubal, Kleinert, and Buch (2003) use firm level German data for the 1990–2000 period to empirically analyze regional and sectoral patterns of FDI using this approach. They find that sectoral differences are key to enhancing the explanatory power of their models. In particular, while varying set up costs explain some of the difference in FDI reported across some sectors, other less tangible differences (such as cultural proxies, regulations, etc.) matter in some cases. By analyzing the export- and FDI-intensity differences across sectors employing elements from gravity and tradability, we are able to theoretically reconcile our model with the empirical facts. It has to be noted that we remove ourselves from the traditional sense of physical gravity (i.e., distance) by looking only at the U.S. and Canada. This allows us to focus on sectoral costs that are influential in servicing decisions. Nevertheless, we allow for intangible elements in the spirit of gravity, alongside differences in the transportation cost, to drive patterns in sectoral differences in servicing intensities. The rest of the paper is organized as follows. In Section 2, we develop the model. Section 3 describes the data used in the numerical experiments discussed in Section 4. Finally, we draw concluding remarks in Section 5.

This paper had the objective of explaining the large variations of exports to FDI sales among sectors (also referred to as export- or FDI sales-intensities) observed in the data. While the trade literature has advanced significantly in this direction, we show that sectoral determinants traditionally used fail to account for the observed variations. We do so by building on the (Helpman et al., (2004) model of monopolistic competition where firms can choose between the foreign market servicing options of exports and FDI sales. To calibrate this model, we aggregate firms into sectors and we show that transportation costs, fixed setup costs, consumer utility weights, and productivity dispersion are not enough to match sectoral data for the U.S. and Canada in 1997. Inspired by the gravity literature employed to explain geographic patterns of trade and FDI flows, we expand the model to account for unobserved foreign market servicing costs, which we call the difficulty of foreign market penetration. We find that the expanded model does a far superior job matching several moments in the data. These market penetration costs are costs that may influence both exporters and multinationals. For example, contractual costs as in Antràs (2003) will be relevant in making the FDI or export choice for some sectors, not for others. These penetration costs allow for inclusion of multinational tax exceptions, government export incentive programs, advertising and product development costs, market knowledge, etc. Thus, we conclude that going beyond traditional transportation costs is needed to understand sectoral differences in foreign market servicing. Based on our findings, we believe that a more general concept that captures intangible sectoral costs has to be incorporated into the profit maximization problem in order to accurately understand choices made by multinational corporations. Our work suggests that future empirical research on the sectoral difficulties of foreign market penetration is needed to formalize its inclusion into individual firm-based models.