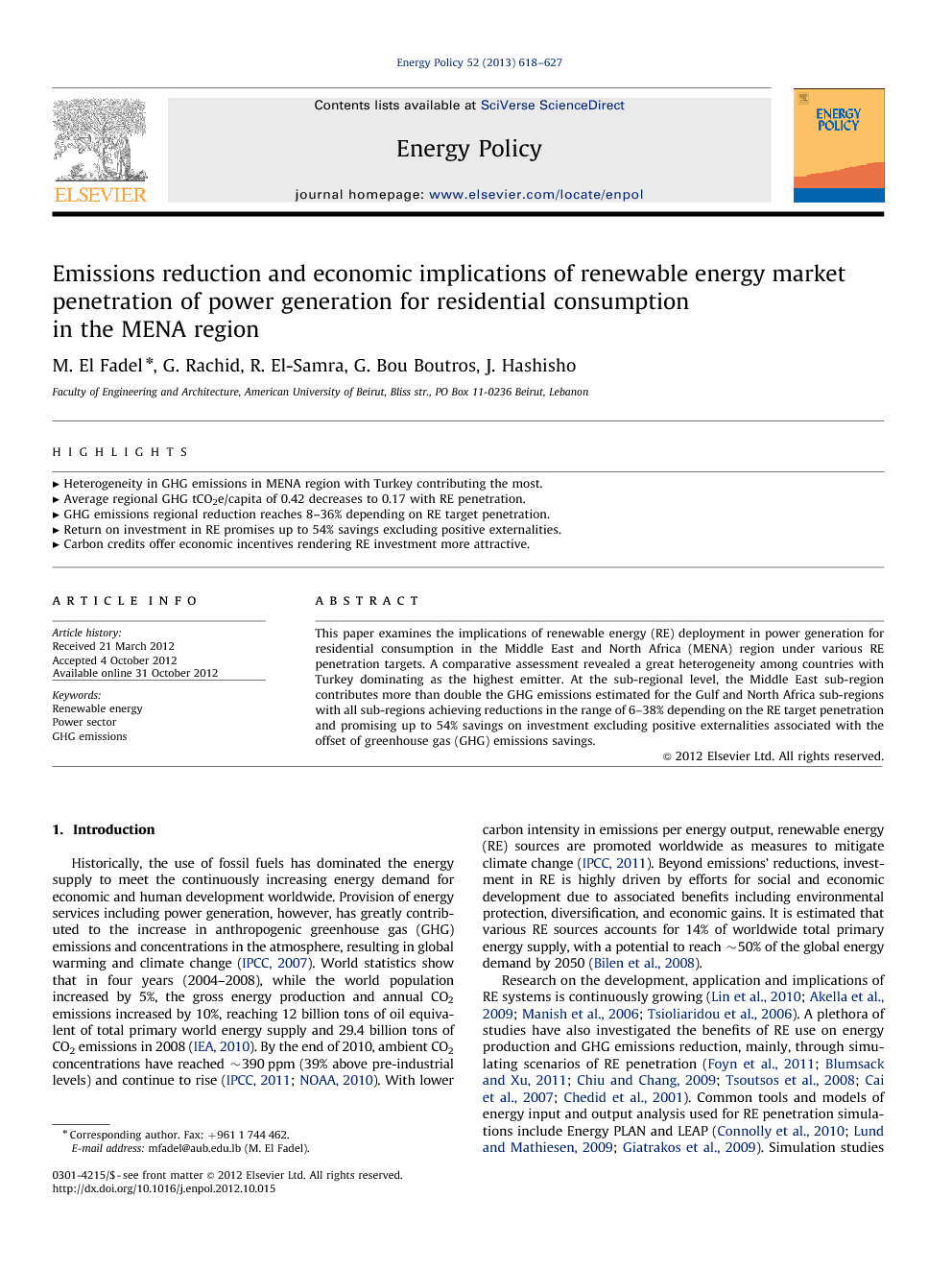 This paper examines the implications of renewable energy (RE) deployment in power generation for residential consumption in the Middle East and North Africa (MENA) region under various RE penetration targets. A comparative assessment revealed a great heterogeneity among countries with Turkey dominating as the highest emitter. At the sub-regional level, the Middle East sub-region contributes more than double the GHG emissions estimated for the Gulf and North Africa sub-regions with all sub-regions achieving reductions in the range of 6–38% depending on the RE target penetration and promising up to 54% savings on investment excluding positive externalities associated with the offset of greenhouse gas (GHG) emissions savings.

Historically, the use of fossil fuels has dominated the energy supply to meet the continuously increasing energy demand for economic and human development worldwide. Provision of energy services including power generation, however, has greatly contributed to the increase in anthropogenic greenhouse gas (GHG) emissions and concentrations in the atmosphere, resulting in global warming and climate change (IPCC, 2007). World statistics show that in four years (2004–2008), while the world population increased by 5%, the gross energy production and annual CO2 emissions increased by 10%, reaching 12 billion tons of oil equivalent of total primary world energy supply and 29.4 billion tons of CO2 emissions in 2008 (IEA, 2010). By the end of 2010, ambient CO2 concentrations have reached ∼390 ppm (39% above pre-industrial levels) and continue to rise (IPCC, 2011 and NOAA, 2010). With lower carbon intensity in emissions per energy output, renewable energy (RE) sources are promoted worldwide as measures to mitigate climate change (IPCC, 2011). Beyond emissions' reductions, investment in RE is highly driven by efforts for social and economic development due to associated benefits including environmental protection, diversification, and economic gains. It is estimated that various RE sources accounts for 14% of worldwide total primary energy supply, with a potential to reach ∼50% of the global energy demand by 2050 (Bilen et al., 2008). Research on the development, application and implications of RE systems is continuously growing (Lin et al., 2010, Akella et al., 2009, Manish et al., 2006 and Tsioliaridou et al., 2006). A plethora of studies have also investigated the benefits of RE use on energy production and GHG emissions reduction, mainly, through simulating scenarios of RE penetration (Foyn et al., 2011, Blumsack and Xu, 2011, Chiu and Chang, 2009, Tsoutsos et al., 2008, Cai et al., 2007 and Chedid et al., 2001). Common tools and models of energy input and output analysis used for RE penetration simulations include Energy PLAN and LEAP (Connolly et al., 2010, Lund and Mathiesen, 2009 and Giatrakos et al., 2009). Simulation studies reported potential GHG emission reductions worldwide ranging from as low as 4.8% by 2020 in South Korea (Jun et al., 2010) to as high as 40–45% in China (Shan et al., 2012 and Liu et al., 2011) under different economic growth and RE supply scenarios. A 32% reduction in emissions was estimated for Mexico by 2025 (Manzini et al., 2001) while an 11.2–35% emission reduction from the electricity generation only was foreseen for Lebanon under different RE use scenarios (Dagher and Ruble, 2011 and El Fadel et al., 2003). Similar results were reported for various developing and developed countries i.e. Sri Lanka, Thailand, Cyprus, Greece, Denmark, Norway and G7 countries (Gebremedhin and Granheim, 2012, Tsilingiridis et al., 2011, Wijayatunga and Prasad, 2009, Sadorsky, 2009, Tanatvanit et al., 2003, Tsoutsos et al., 2008 and Lund and Mathiesen, 2009) as well as for the global energy system (Foyn et al., 2011 and Krewitt et al., 2009). In parallel, high initial RE investment needs were invariably highlighted, with a potential to delay and discourage wide RE deployment (Shan et al., 2012, Liu et al., 2011, Jun et al., 2010, Wijayatunga and Prasad, 2009 and Cai et al., 2007). With a relative lack of studies on the implications of RE use in the Middle East North Africa (MENA) region, this paper focuses on the potential benefits of RE deployment in the power generation (electricity) sector in this region. It explores the potential of renewable resources to meet the latent and growing residential demand for energy while providing socio-economic benefits to individual countries and the region. It examines environmental and economic implications of RE deployment by relying on long term simulations of GHG emissions under several scenarios on a country by country and sub-region basis.