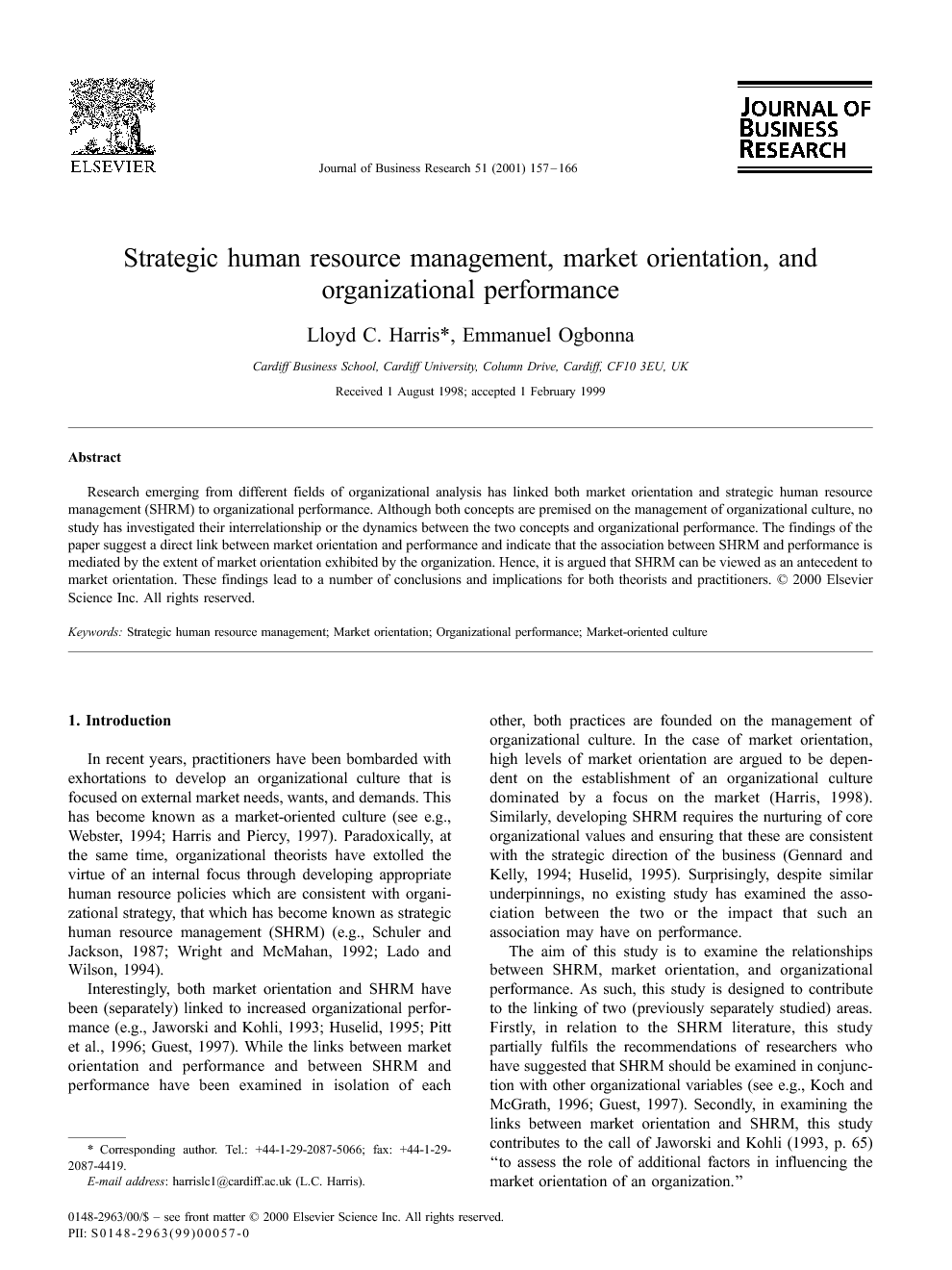 In summary, a review of existing literature finds that Strategic HRM and market orientation are both developed concepts which have been linked to organizational performance (see e.g., Jaworski and Kohli, 1993 and MacDuffie, 1995). However, a review of literature pertaining to organizational culture (e.g., Ogbonna, 1992) and literature on the barriers to market orientation (e.g., Harris, 1998) finds that strategic HRM centers on managing organizational culture while market orientation can be facilitated or impeded by cultural barriers. Consequently, this paper theorizes that the association between market orientation and organizational performance is direct while the link between strategic HRM and organizational performance is indirect, being mediated by the extent of market orientation. Briefly, a study designed to investigate these issues demonstrates that strategic HRM and market orientation are both linked to organizational performance although strategic HRM is associated indirectly. The findings of the study lead to a number of interesting implications for both marketing and HRM theorists and practitioners. The first (and rather obvious) implication can be derived from the finding that both strategic HRM and market orientation are related to organizational performance. Consistent with a variety of extant theories and studies, evidence was found to suggest that both strategic HRM and market orientation are linked to the overall performance of an organization. Hence, organizations wishing to improve company performance should focus their attention on the needs, wants, and demands of the market, while paying attention to harnessing its human resource in order to ensure that these are met. More profound implications can be derived from the finding that Strategic HRM is not directly associated with performance but rather is purely indirectly linked to company performance. This finding may provide some justification for the claims of past theorists that the link between strategic HRM and performance is not as clear as is suggested by some authors (as noted by Wright and McMahan, 1992, Koch and McGrath, 1996 and Guest, 1997). This finding provides some support for the ‘universalist’ perspective on HRM theorizing (Delery and Doty, 1996) in that Strategic HRM is found to be linked to performance (albeit indirectly). However, the findings also support aspects of the ‘contingency’ perspective (Delery and Doty, 1996) through the implication that the success of strategic HRM is dependent on policies being consistent with the needs, wants, and demands of the market. Thus, for Strategic HRM to lead to increased performance, the policies and practices arising from it must not only be internally consistent they must also be focused on generating a market-led organizational culture. The findings demonstrate that the development of market orientation is partially dependent on the appropriate strategic management of the human resource facilitating the development of an appropriate organizational culture. Indeed, an examination of the coefficient of multiple determination (R2) in Table 5 finds that the measure of strategic HRM explains 25% of the variance of market orientation around its mean. Put differently, the level of strategic HRM may predict 25% of the level of market orientation exhibited by an organization. This finding may appear to some to pose an organizational paradox in that the development of an external focus appears to be dependent on an internal orientation. Thus, the avoidance of marketing myopia is contingent on a myopic focus on the organization. This argument would hold if strategic HRM is purely focused on internal dynamics as may have been the case with early research into HRM (see Delery and Doty, 1996). However, recent theorizing in strategic HRM emphasizes both an internal and external focus (see e.g., Huselid et al., 1997). A key issue that emerges is the need for an ‘appropriately’ oriented strategic human resource. A contentious issue in management theory related to the development of sustainable competitive advantage is that the sources of such an advantage should be imperfectly imitable Fiol, 1991 and Reed and DeFillippi, 1990. Hence, Barney, 1996 and Barney, 1991 argues that providing an organizational culture is unique, it may provide a source of sustainable advantage over competitors. A potential implication of the findings of this paper is that a singular focus on discipline-specific sources of competitive advantage (such as market orientation or a flexible human resource policy) may not provide a unique and imperfectly imitable advantage, which may be sustained. However, it is possible to argue that a market-oriented culture developed as the result of a market-focused (strategic) HRM may provide the means to develop a unique and unimitable source of competitive advantage derived from both an internal and an external orientation. The findings, conclusions, and implications of this study are bounded by a series of limitations. These limitations suggest that caution is needed in interpreting parts of this study but they also indicate a number of potentially fruitfully avenues for future research. Firstly, the data presented in this paper was obtained using a cross-sectional methodology that precludes definitive causal claims (although it has been argued that statistical association in combination with extant theory provides adequate evidence to suggest tentatively some level of prediction). Furthermore, while the sample of the study comprises large organizations, the sample is culturally biased in that sample companies were based in the UK, suggesting that future research could examine these issues in alternative contexts. The study is focused on certain aspects of organizational performance, which a number of authors (see Guest, 1997) suggest overlooks other performance indicators (such as employee satisfaction and well-being). Consequently, a recommendation for future research is to broaden measures of performance to evaluate alternative predictors. Finally, this paper argues that valuable insights into the antecedents to market orientation and the strategic HRM-performance link have been gained via the study of such issues from alternative perspectives. Thus, it is suggested that researchers continue to draw upon diverse literatures and perspectives to provide illuminating insights into traditionally narrow disciplines.