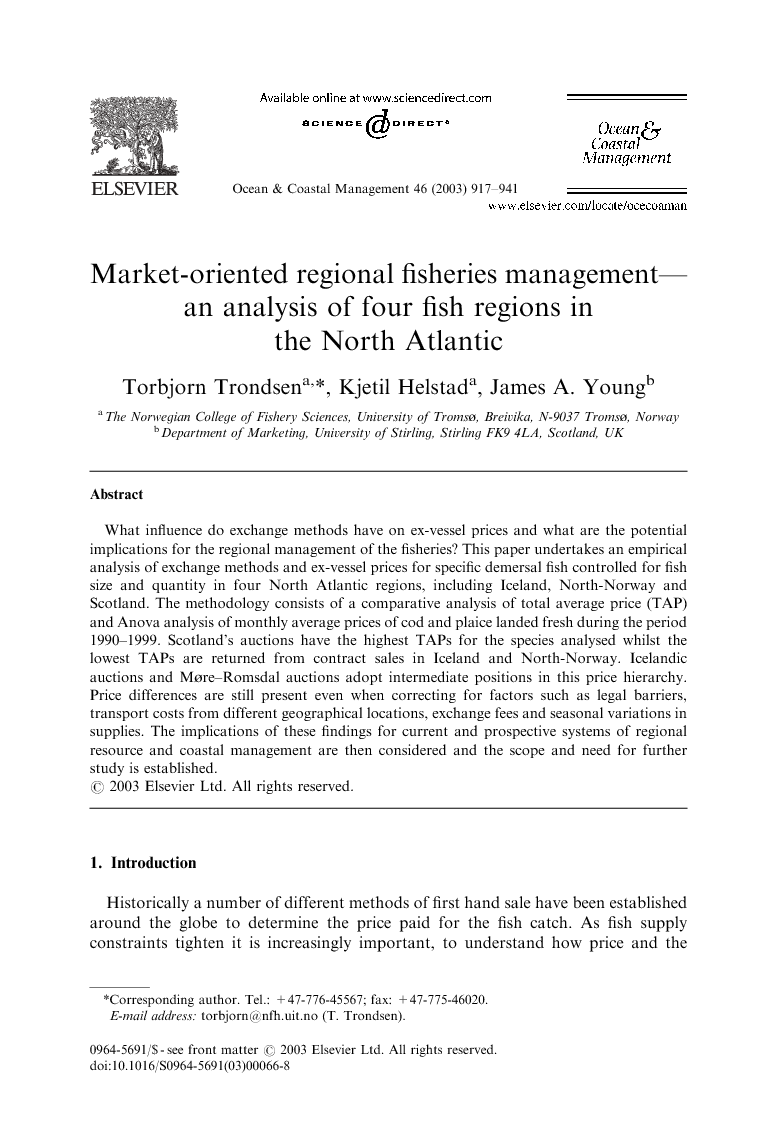 What influence do exchange methods have on ex-vessel prices and what are the potential implications for the regional management of the fisheries? This paper undertakes an empirical analysis of exchange methods and ex-vessel prices for specific demersal fish controlled for fish size and quantity in four North Atlantic regions, including Iceland, North-Norway and Scotland. The methodology consists of a comparative analysis of total average price (TAP) and Anova analysis of monthly average prices of cod and plaice landed fresh during the period 1990–1999. Scotland's auctions have the highest TAPs for the species analysed whilst the lowest TAPs are returned from contract sales in Iceland and North-Norway. Icelandic auctions and Møre–Romsdal auctions adopt intermediate positions in this price hierarchy. Price differences are still present even when correcting for factors such as legal barriers, transport costs from different geographical locations, exchange fees and seasonal variations in supplies. The implications of these findings for current and prospective systems of regional resource and coastal management are then considered and the scope and need for further study is established.

Historically a number of different methods of first hand sale have been established around the globe to determine the price paid for the fish catch. As fish supply constraints tighten it is increasingly important, to understand how price and the value added might be influenced, if at all, by the exchange method employed. Not least is the core fact that fishermen's propensity to fish and economic performance will depend upon the market value obtained from their effort. Contemporary economic problems resultant from the failure of fisheries resource management systems to correct excess levels of fishing effort are well documented in the literature [1], [2] and [3]. The vast majority of this work has been focused upon cost-reducing issues pertaining to resource management allocation systems, regulation of fishing effort, enforcement of management measures and their consequences for rent, industrial structure and the adjacent dependent regions and their populations. Research endeavours, from a variety of perspectives, have sought to improve profitability whilst dealing with the core issue of declining catches failing to maintain a sustained level of output sufficient to satisfy income demands and aspirations within the industry. Notwithstanding the importance of these phenomena it may be argued that this focus has tended to neglect the central role of price in resource management and the fundamental importance of price as a key determinant of fishers’ incomes and by that, regional economic development. Prices are of course dependent upon the willingness of buyers (and ultimately consumers) to pay for delivery of the right quality and quantity of specified species at given times and locations. Whilst we recognise the importance of buyer preferences, space constraints necessitate that this paper concentrates more explicitly on their aggregate interaction with the supply determinants of price. Fishers fish to earn income rather than just catch a specified, or maximum, quantity of fish. Although sometimes the fishers behaviour may suggest otherwise [4], [5] and [6]. In fact concentration on the quantity of fish caught rather than the unit value has been encouraged by some of the resource management schemes emplaced, perversely to improve the profitability of the fisheries [7]. Theoretical losses of open-access or regulated open-access fisheries are presented in Wilen and Homans [8] and Trondsen [4]. However, if sustainable levels of fishing effort are to be realised, this would suggest that rather than just focus upon ways to reduce or stabilise the quantity of fish removed, be this by effort restriction, limits on quotas or whatever, alternative mechanisms must also be sought which might give incentives for economic development in the fishery regions. One method of moderating the negative effects of such management systems is to concentrate on ways in which the unit price of the resource might be increased. If higher unit values can be realised for the fish landed, fishers should be able to retain current income levels with reduced catches (and conceivably may achieve even higher incomes) but importantly, not necessarily at the cost of excessive catch levels. The concept of market-oriented value adding (MOVA) is not new of course, but traditionally the emphasis of value adding has been placed upon raw material transformation into products that incorporate the wide array of attributes sought by fish consumers. Fishers may process live fish into many different products as whole, gutted, fillets, heads, cheeks, tongue, liver, stomach and bones. Through processing, each product can be differentiated into various sizes and conservation forms where each product has its own product-market segment. The total market value fishers gain from the live catch is therefore both dependent on satisfying buyer preferences in a variety of different marketing chains and power position in the marketing chain [9]. Within this arena attention has been focused upon factors pertaining to consumption. A considerable body of work has evolved in connection with consumers’ substitution between different fish products, in particular concerning the impact of expanded aquaculture products [10], [11], [12] and [13]. Consumer and catering markets for fish have also received attention, as fish has become more favoured as a food for a variety of different reasons including health, food scares, convenience etc. [14], [15], [16] and [17]. However notwithstanding the rise in the demand for fish and the increasingly complex interplay of wild captured and cultured products, the determination of prices of fish products within the value chains has been largely ignored. This paper seeks to address this paucity by exploring the price formation as an indicator of market oriented value within the value chain between fishers and the first hand buyer controlled for the exchange methods auction, contracts and minimum price regulation.