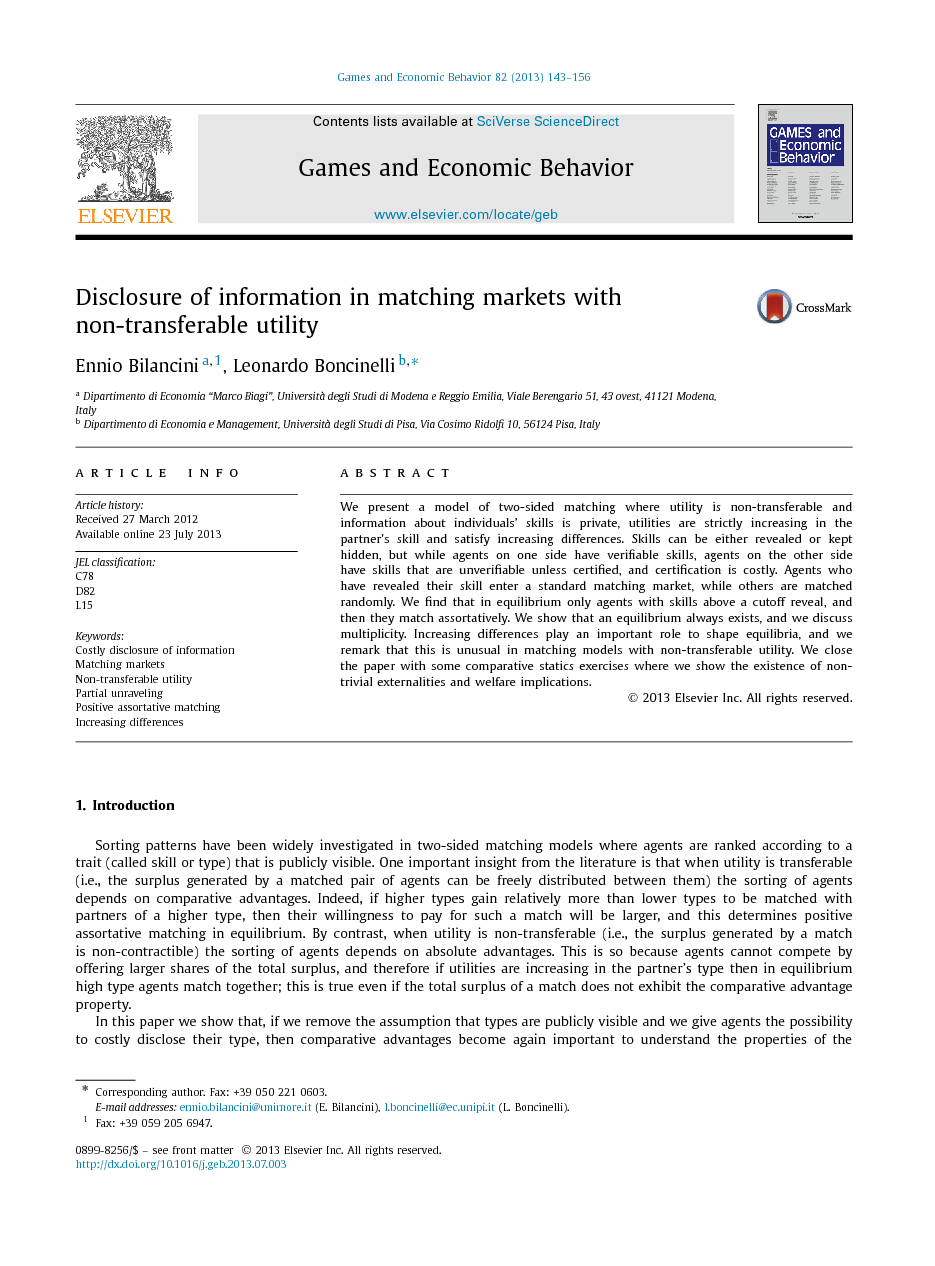 We present a model of two-sided matching where utility is non-transferable and information about individualsʼ skills is private, utilities are strictly increasing in the partnerʼs skill and satisfy increasing differences. Skills can be either revealed or kept hidden, but while agents on one side have verifiable skills, agents on the other side have skills that are unverifiable unless certified, and certification is costly. Agents who have revealed their skill enter a standard matching market, while others are matched randomly. We find that in equilibrium only agents with skills above a cutoff reveal, and then they match assortatively. We show that an equilibrium always exists, and we discuss multiplicity. Increasing differences play an important role to shape equilibria, and we remark that this is unusual in matching models with non-transferable utility. We close the paper with some comparative statics exercises where we show the existence of non-trivial externalities and welfare implications.

In this paper we have developed and studied a model which lies at the intersection of the research on positive assortative matching under non-transferable utility and the research on strategic revelation of information when disclosure is costly. We have obtained that when types are private information and disclosure is costly on one side of the market, only the best agents get certification and match with agents on the other side in a positive assortative way, while the remaining agents match randomly. Moreover, multiple equilibria may arise, as a consequence of the endogenous value of the outside option. Typically, in models of matching with transferable utility the shape of a stable matching — and, in particular, whether agents match assortatively or not — is determined by comparative advantages. By contrast, if utility of a match is non-transferable, then what matters are absolute advantages. In this paper we have shown that under costly disclosure of types comparative advantages become again important to understand the properties of the equilibrium matching when utility is non-transferable. A natural follow-up of the paper would be to take into consideration the case in which agents on both sides have unverifiable skills that require certification in order to be trusted. In such a situation it is no longer enough to consider the relative gain of certification in one population only, since the corresponding cutoff mate might find it not convenient to reveal the skill, due to the cost of certification that must now be paid. Therefore, the choice of whether to certificate or not must be jointly considered for agents on both sides. In particular, if the relative gain from certification is negative for the cutoff agent on one side, then no equilibrium can arise, since such agent would prefer to go for a random match. If, instead, the relative gain from certification is positive for the cutoff agent on one side, then we can have an equilibrium if the cutoff agent on the other side is indifferent whether to certify or not. Indeed, we would have additional agents on the first side who are willing to certificate and form pairs with same-rank mates, but they would not find available partners on the other side. We observe that such a case is similar to what we have studied in the present paper, where agents with verifiable skill have null certification costs and hence their relative gain from certification is always positive.