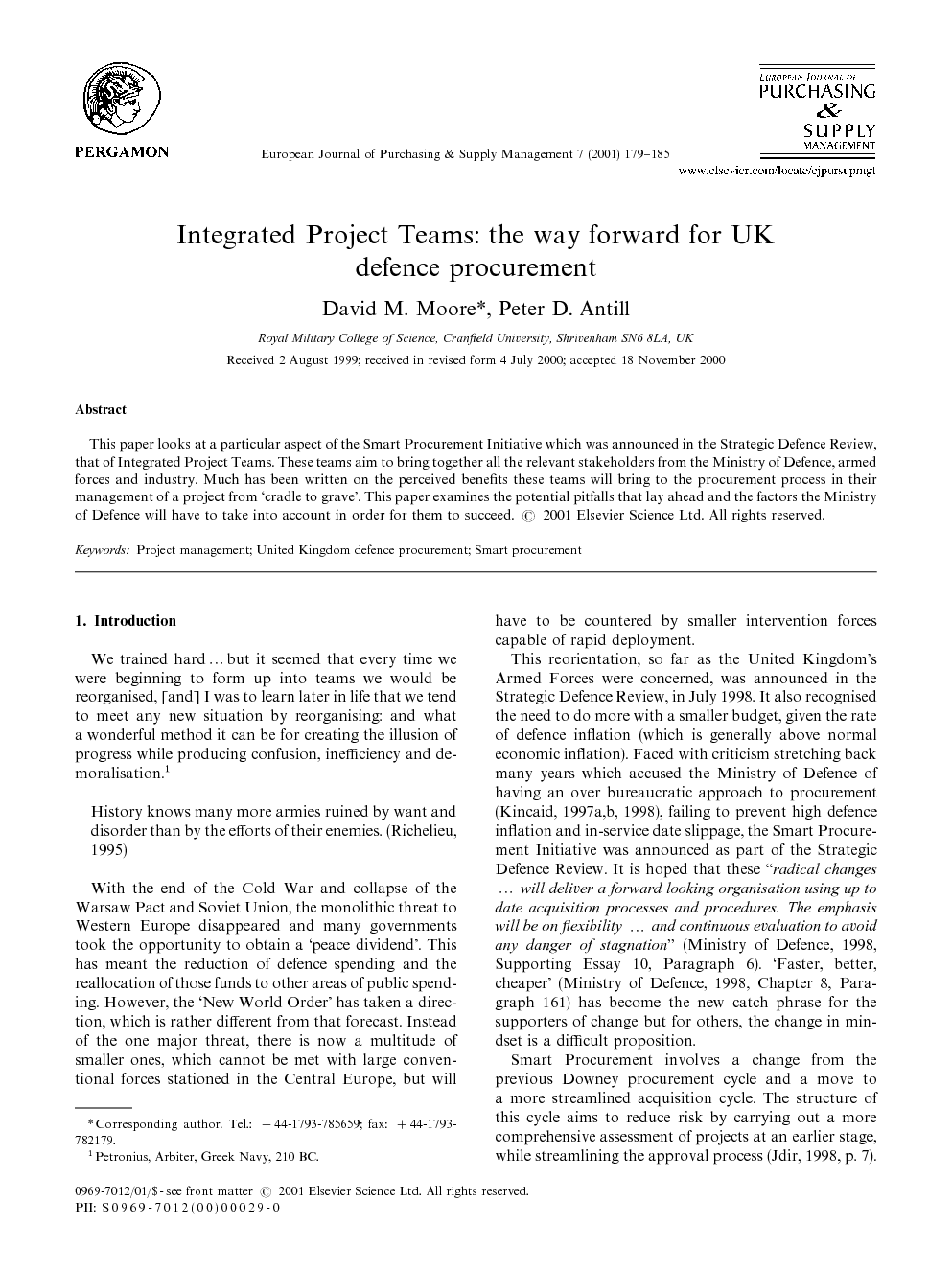 This paper looks at a particular aspect of the Smart Procurement Initiative which was announced in the Strategic Defence Review, that of Integrated Project Teams. These teams aim to bring together all the relevant stakeholders from the Ministry of Defence, armed forces and industry. Much has been written on the perceived benefits these teams will bring to the procurement process in their management of a project from ‘cradle to grave’. This paper examines the potential pitfalls that lay ahead and the factors the Ministry of Defence will have to take into account in order for them to succeed.

We trained hard…but it seemed that every time we were beginning to form up into teams we would be reorganised, [and] I was to learn later in life that we tend to meet any new situation by reorganising: and what a wonderful method it can be for creating the illusion of progress while producing confusion, inefficiency and demoralisation.1 History knows many more armies ruined by want and disorder than by the efforts of their enemies. (Richelieu, 1995) With the end of the Cold War and collapse of the Warsaw Pact and Soviet Union, the monolithic threat to Western Europe disappeared and many governments took the opportunity to obtain a ‘peace dividend’. This has meant the reduction of defence spending and the reallocation of those funds to other areas of public spending. However, the ‘New World Order’ has taken a direction, which is rather different from that forecast. Instead of the one major threat, there is now a multitude of smaller ones, which cannot be met with large conventional forces stationed in the Central Europe, but will have to be countered by smaller intervention forces capable of rapid deployment. This reorientation, so far as the United Kingdom's Armed Forces were concerned, was announced in the Strategic Defence Review, in July 1998. It also recognised the need to do more with a smaller budget, given the rate of defence inflation (which is generally above normal economic inflation). Faced with criticism stretching back many years which accused the Ministry of Defence of having an over bureaucratic approach to procurement (Kincaid (1997a), Kincaid (1997b) and Kincaid (1998)), failing to prevent high defence inflation and in-service date slippage, the Smart Procurement Initiative was announced as part of the Strategic Defence Review. It is hoped that these “radical changes … will deliver a forward looking organisation using up to date acquisition processes and procedures. The emphasis will be on flexibility … and continuous evaluation to avoid any danger of stagnation” ( Ministry of Defence, 1998, Supporting Essay 10, Paragraph 6). ‘Faster, better, cheaper’ ( Ministry of Defence, 1998, Chapter 8, Paragraph 161) has become the new catch phrase for the supporters of change but for others, the change in mindset is a difficult proposition. Smart Procurement involves a change from the previous Downey procurement cycle and a move to a more streamlined acquisition cycle. The structure of this cycle aims to reduce risk by carrying out a more comprehensive assessment of projects at an earlier stage, while streamlining the approval process (Jdir, 1998, p. 7). Formal approval has been reduced from three to two occasions, the first time is during the concept phase (Initial Gate) and between the assessment and demonstration phases (Main Gate). Central to the implementation of Smart Procurement is the introduction of Integrated Project Teams, which are part of the drive to move from a functionally based management and reporting structure to a project-based organisation. They will drive the management of major defence equipment procurement, balance the trade-offs between performance, cost and time, within boundaries set by the approving authority. These Teams will bring together all defence stakeholders and industry under a single-team leader. They will be responsible for overseeing the complete life cycle of the piece of equipment, and once in service, will move from what was the Procurement Executive, now the Defence Procurement Agency, to the Defence Logistics Organisation where they will manage equipment support. Since the announcement of Smart Procurement much has been written on the potential benefits that Integrated Project Teams will hopefully bring. It is supposed that they will improve the interface with industry, create a better understanding of requirements and establish an environment where industry is motivated to perform (DPA, 1999; Galloway, 1998; The Financial Times, 1998) and so reduce cost, risk and time into service while improving product quality. The formation of a team should provide continuity, consistency, flexibility and increased performance due to the integration of a wide range of functional activities and decision-making, as well as increased motivation. These may well be gallant objectives, but how achievable are they? What obstacles does the Ministry of Defence face in the implementation and running of these Teams?

To conclude, following years of criticism, the MoD is attempting to modernise and update its procurement system. Central to these measures is the introduction of Integrated Project Teams that bring together all the stakeholders into a single entity. In the course of this, much has been said about the potential benefits of the Teams but little about their limitations. So, what factors does the Ministry of Defence have to consider, if Integrated Project Teams are to fulfil their potential and deliver the benefits of Smart Procurement? • Stakeholder co-location: If one accepts that stakeholders should be housed together if Integrated Project Teams are to stand the best chance of success (Fleming, 1997), then it follows that Team leaders must have the ability to co-locate stakeholders. At the moment the main internal stakeholders are geographically separated and in the case of Operational Requirements branch cannot fulfil all their Team commitments. There is an urgent need for internal stakeholders to be brought together on one site. While some elements of Operational Requirements may join the Defence Procurement Agency at Abbey Wood, to improve the chances of the Teams succeeding and give industry a single point of contact throughout the whole life cycle of the project, the Defence Logistics Organisation must join. If the site at Abbey Wood is unsuitable then an alternative site should be found. Eventually, both the Defence Procurement Agency and Defence Logistics Organisation could merge (along with their respective organisations) to create a Defence Support Agency (Material) or similar. • Information technology: If it is not possible to overcome geographic separation, Information technology and Electronic Data Interchange must be exploited to the full to bring stakeholders together within a common electronic network. All parties, including industry, must have the ability to exchange information over an Internet, which must also have the ability to hold online conferences. • Training and education: This is essential for all stakeholders so that cultural barriers can be broken down. The Smart Procurement documentation discussed the introduction of an Acquisition Stream with “career paths and an endurable culture of change” (Ministry of Defence, Smart Procurement: Personnel and Training, p. 1). For this to work, continuity must be provided to all posts, not just the team leader's, and the team leader must be able to adjust tour lengths at their discretion. Personnel must be thoroughly trained in Integrated Project Team practices. Smart Procurement proposes personnel attend modules at the time of appointment and at various stages of a project according to individual need. (Ministry of Defence, Smart Procurement: Personnel and Training, pp. 2–3) An Integrated Project Team training strategy is required urgently. • Rewards: To offset the differences in Ministry of Defence and military remuneration, there is a need to introduce some form of reward scheme for civil servants and military officers. At the same time, incentives should be introduced to reward successful Team performance. Suggestions proposed under Smart Procurement include performance-related bonuses and ‘shares’ in an Integrated Project Team terminal bonus. • Industry support: In order to ensure Team success, industry must be motivated to co-operate fully in the Integrated Project Team process. Without their full support, Integrated Project Teams will fail to improve the current procurement system. It is possible that this could be achieved through a combination of financial and non-financial methods. The former would include milestone payments and the offer of a completion bonus if the project were completed on or ahead of schedule, to budget and specification. Non-financial methods would be aimed at breaking down some of the cultural barriers and would include the involvement of industry in Team training and education. The US Department of Defence has found that these Teams work better when contractors have an established Integrated Project Team system ( US Department of Defence, 1996, p. 11). The existence of such an Integrated Project Team culture within a contractor should be included as a selection criterion. • Independent regulator: The appointment of an independent regulator would protect the Ministry of Defence from the risk of exploitation by single-source suppliers. This idea has already been mooted, and the regulator would have the same role as OFTEL in regards public telecommunications and British Telecom ( Taylor, 1998, p. 42). A supervisory role during the concept phase of the Acquisition Cycle should be added as well as this would protect the Ministry of Defence from accusations of unfair competition when more than one company is ‘co-opted’ into an Integrated Project Team. It may also give potential customers the confidence to share information, without fear of rivals gaining an advantage.