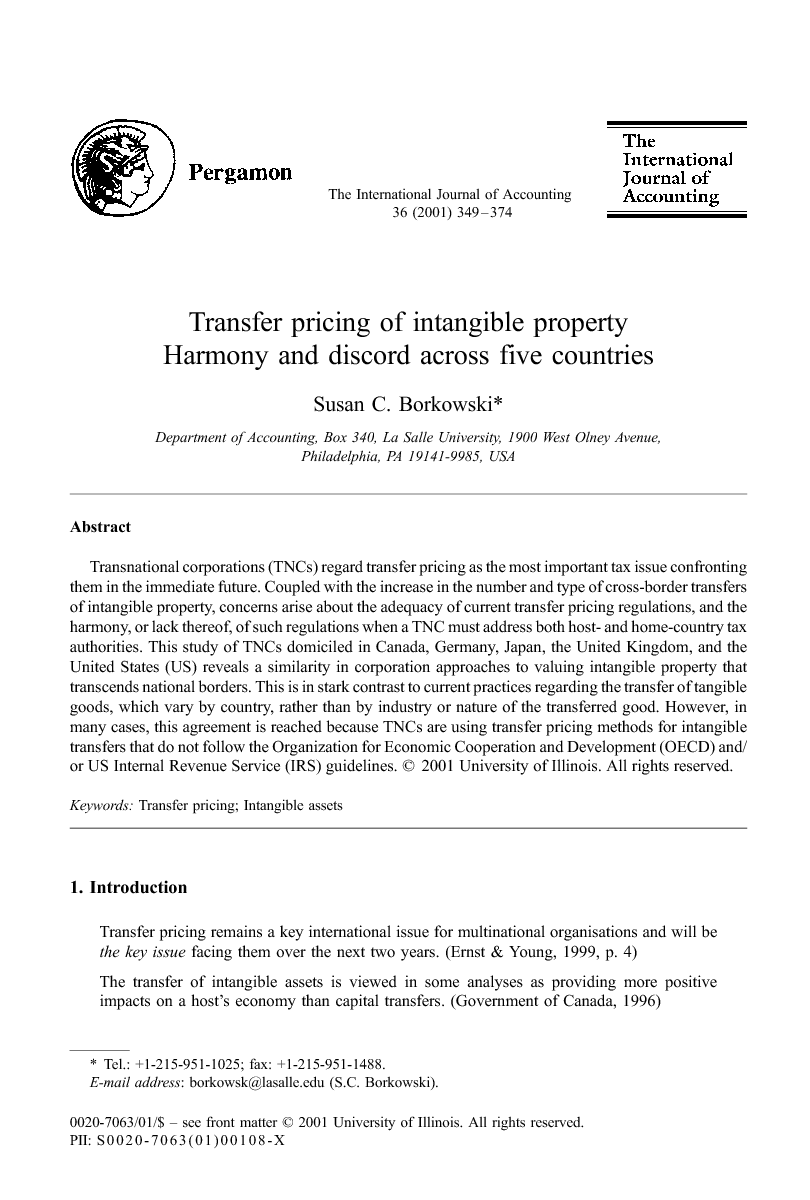 Transnational corporations (TNCs) regard transfer pricing as the most important tax issue confronting them in the immediate future. Coupled with the increase in the number and type of cross-border transfers of intangible property, concerns arise about the adequacy of current transfer pricing regulations, and the harmony, or lack thereof, of such regulations when a TNC must address both host- and home-country tax authorities. This study of TNCs domiciled in Canada, Germany, Japan, the United Kingdom, and the United States (US) reveals a similarity in corporation approaches to valuing intangible property that transcends national borders. This is in stark contrast to current practices regarding the transfer of tangible goods, which vary by country, rather than by industry or nature of the transferred good. However, in many cases, this agreement is reached because TNCs are using transfer pricing methods for intangible transfers that do not follow the Organization for Economic Cooperation and Development (OECD) and/or US Internal Revenue Service (IRS) guidelines.

There is much more agreement among TNCs and their transfer pricing methods for intangible property than their transfer pricing methods for tangible goods. Regardless of country, significant differences in TNC demographics, and differences in the types of intangibles transferred, there were no significant differences in the methods used to value intangible property in cross-border transfers. The logical assumption is that this harmony may be due in part to the relative concurrence of the OECD guidelines (followed by Canada, Germany, Japan, and the UK) with the US IRS regulations regarding the valuation of intangible property. With the recent issuance of the OECD's guidelines on cost sharing, it could be assumed that intangible transfer pricing practices may become even more aligned across countries. However, upon further analysis, the harmony is deceptive. Fully 25% of the responding TNCs use a transfer pricing method to value intangible property that is not “acceptable” to either the OECD or the US IRS. Fully 25% of the responding TNCs currently use a transfer pricing method to value intangible property that is not one of the methods specifically defined by either the OECD or the US IRS. This noncompliance is due to any or all of the following: a reliance on historical practice, the supplanting of US regulations by OECD guidelines, stronger country-specific transfer pricing rules and penalties, and/or the innovative intangibles spawned by technological change and global expansion. The choice of an intangible pricing method is not related to country, but to industry (and, therefore, the type of intangible property transferred), TNC philosophy of managerial performance evaluation, the need for information for decision making, and global factors such as the economy, currency fluctuations, political stability, and cross-border competition. In contrast, the choice of a transfer pricing method for tangible goods is definitely related to where the TNC is domiciled, in addition to other factors. Perhaps intangible assets are more global in nature and therefore receive a more universal treatment not constrained by national borders when compared to tangible goods. Audit experience among these TNCs does not seem to be driven by the type of transfer pricing method utilized. Instead, both the country in which the TNC is domiciled, and internal TNC practices, seem to increase the chances of an audit by the home-country tax authority. It seems that tax authorities are honoring both the letter and the spirit of the OECD guidelines and giving TNCs the discretion to choose the method optimal for their given circumstances, and that it is other factors driving an audit. An area of future research, either as a case or empirical study, is the audit status of Japanese TNCs. Given the Ernst & Young (1997) and this study's findings, why are they seldom audited by their own tax authority, the NTAA, yet, are very frequently audited by the host countries' tax authorities? Many studies on tangible transfer pricing conclude that (1) regulations need to be revised to reflect a TNC's operating realities and (2) differences between OECD guidelines and US regulations must be eliminated. In the case of intangible assets, however, the guidelines and regulations are remarkably similar, with the majority of TNCs using one of the specific approved methods for valuation, thereby satisfying both host and home tax authorities. It is a pleasure to recommend the status quo regarding the transfer pricing of intangibles, and to hope that the concurrence of TNC practice and host/home regulations will be contagious, eventually affecting the more contentious realm of tangible transfer pricing.