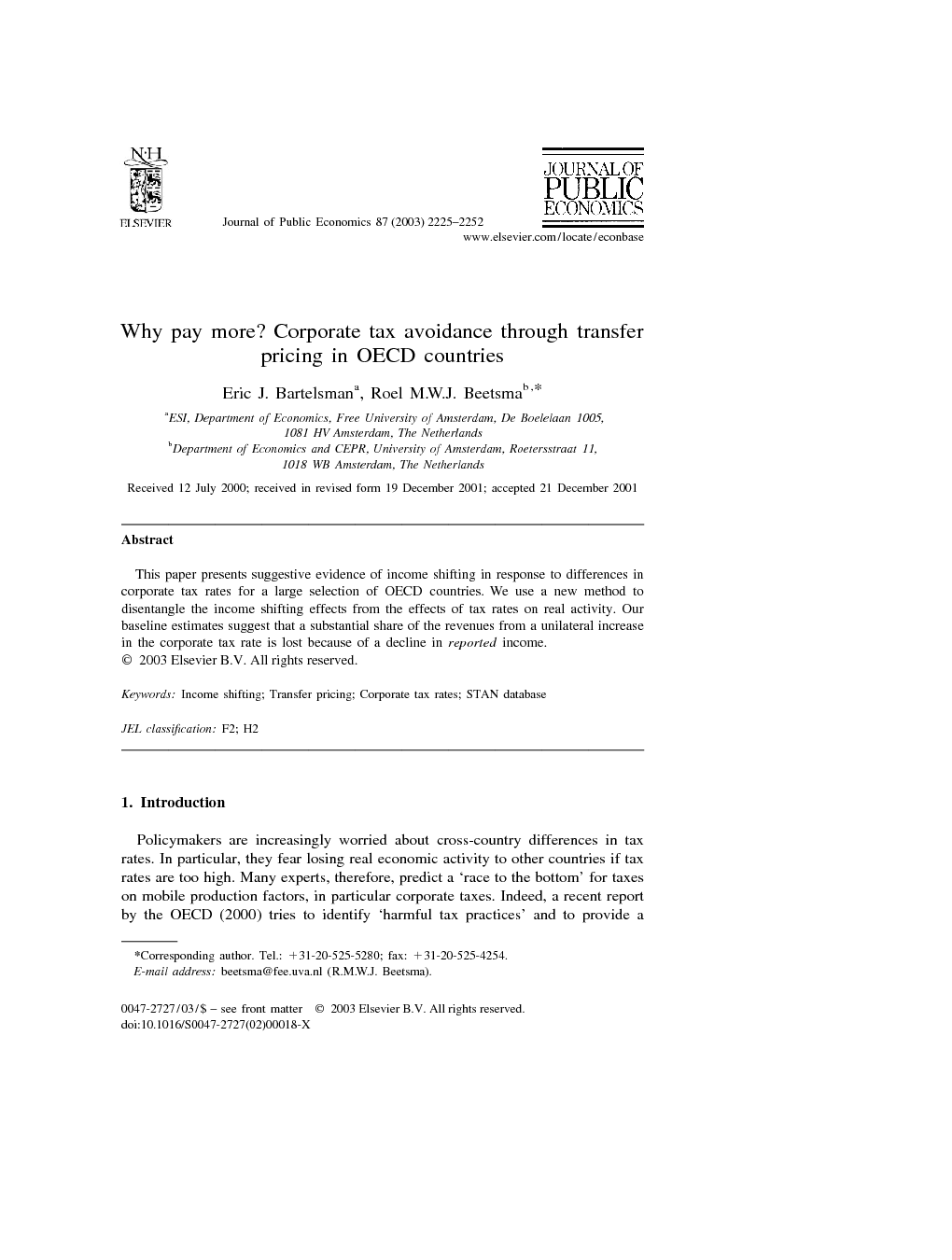 This paper presents suggestive evidence of income shifting in response to differences in corporate tax rates for a large selection of OECD countries. We use a new method to disentangle the income shifting effects from the effects of tax rates on real activity. Our baseline estimates suggest that a substantial share of the revenues from a unilateral increase in the corporate tax rate is lost because of a decline in reported income.

Policymakers are increasingly worried about cross-country differences in tax rates. In particular, they fear losing real economic activity to other countries if tax rates are too high. Many experts, therefore, predict a ‘race to the bottom’ for taxes on mobile production factors, in particular corporate taxes. Indeed, a recent report by the OECD (2000) tries to identify ‘harmful tax practices’ and to provide a platform for the possible cooperation on tax policies with cross-border effects. However, cross-country differences in corporate tax rates may not only induce real activity shifts, they may also lead to pure accounting income shifts between countries. Such income shifts have received much less prominence in the policy debates. Moreover, if policymakers reveal worries about income shifting, then it is about income shifting from the main industrialized economies to the so-called ‘tax havens’, small countries with very low corporate tax rates. Indeed, most the empirical literature has been concerned with income shifting from the US to such tax paradises (e.g. see Hines and Rice, 1994 and Grubert and Slemrod, 1998). The purpose of this paper is three-fold. First, we provide empirical results suggesting that the lack of attention for income shifting among OECD countries and other major economies may be unjustified. That income shifting between these countries could be important should not be surprising given the amount of intra-industry trade among these countries (e.g. Stone and Lee, 1995). Moreover, the relevance of the issue likely will increase because of their ongoing economic integration. Indeed, the ensuing empirical analysis indicates an amount of income shifting that is both statistically and economically significant across a variety of different empirical specifications. Back-of-the-envelope calculations based on our baseline estimates suggest that at the margin more than 65% of the additional revenue from a unilateral tax increase is lost due to a decrease in the reported income tax base. Yet, this figure should only be taken as a first indication that income shifting among OECD countries may be large.1 We explore a large number of variations and extensions of the baseline empirical framework, generally confirming our baseline findings. Secondly, we develop a novel method for isolating the pure effects of income shifting, by controlling for the effects of taxes and unobserved productivity on the scale of real economic activity. In essence, we do this by regressing the ratio of total value added to wage payments on tax rate differences. Finally, whereas previous work has either been concerned with individual firm data or country level data (involving the US and a set of tax havens; e.g. Hines and Rice, 1994), this paper takes an intermediate position and considers evidence for disaggregated industrial sectors for a group of OECD countries. The remainder of the paper is structured as follows. Section 2 discusses the channels and incentives for income shifting. Section 3 motivates the empirical model, while Section 4 describes the data. Section 5 presents the baseline empirical results. In Section 6 we investigate the robustness and a number of extensions of the baseline setup. Finally, Section 7 concludes the main body of the paper.

In this paper we have investigated the importance of income shifting among the industrialized and other major economies as a result of differences in corporate tax rates. While most of the existing empirical work investigates income shifting to tax havens, income shifting among (relatively) large economies seems to have escaped the attention of both researchers and policymakers. In our empirical analysis we have attempted to demonstrate that this may be unjustified. Our empirical analysis has tried to extend the literature in other directions as well: firstly, we have presented a novel method for isolating the pure effects of income shifting. Secondly, and in contrast to the preceding literature, which uses either macroeconomic data or firm-level data, our empirical analysis was based on sectoral data. Finally, we have explored a large number of variations and extensions of the baseline regression. Examples are the use of alternative weighting schemes for the average foreign tax rate, a control for potential domestic income shifting and the use of an indicator of formal enforcement mechanisms for transfer pricing rules. Our findings are consistent with the hypothesis that more enforcement, as measured by the indicator, is associated with less income shifting, although the adoption of formal enforcement mechanisms could well be an endogenous response to existing enforcement practices or an existing enforcement culture. The results for our baseline regression, as well as the variations we considered, suggest that income shifting is both statistically and economically significant: a back-of-the-envelope calculation for our baseline estimates indicates that at the margin more than 65% of the additional revenue resulting from a unilateral tax increase is lost because of income shifting. Moreover, if correct, our estimates would only constitute a lower bound for the effect of tax rate changes on reported income. The reason is that income shifting may also take place through changes in the capital structure, which we have assumed to be constant in our calculation of the amount of income shifting. Nevertheless, because our analysis is one of the first of income shifting between OECD countries, the estimated magnitude of the effect should only be taken as a first indication that there might be substantial income shifting between these countries. As described in Section 2, there are many possible channels through which changes in tax rates can affect reported income. Although we have tried to control for these as well as possible, we cannot rule out that the relation between the value–labor ratio and the tax rates that we found is influenced by these alternative channels. Even so, as Feldstein (1995) emphasizes (in the context of personal income taxation), what matters for efficiency is the total loss of revenues through all channels, when the tax rate is raised. It should be emphasized that our estimates are based solely on the manufacturing sector, of which large parts are indeed dominated by multinationals. Other sectors in the economy may be much less open, in particular the non-traded sector, which constitutes a large share of economic activity in OECD economies. Hence, estimates of income shifting based on manufacturing sector data cannot directly be extrapolated to the whole economy. Nevertheless, cross-border income shifting between OECD countries could be substantial for several reasons. First, the attention of the tax authorities may be directed more towards detecting income shifting to tax havens than to other OECD countries. Second, because of its large share in the world economic activity, the OECD as a whole would offer a substantial scope for income shifting in response to a relative increase in the corporate tax rate. Finally, and related to the previous point, because income shifting through transfer pricing mostly takes place when there is cross-border trade related to real activity, the scope for income shifting among OECD countries would be correspondingly larger than for income shifting to tax havens (which is also confirmed by the results of Pak and Zdanowicz, 2001, for income shifting out of the US). Relatively small distortions of transfer prices on large cross-border transactions are hard to detect by the tax authorities, especially when there exists no outside market for these transactions and when a large component of their value is related to intellectual input. Our findings suggest that the revenues from tighter enforcement of transfer pricing rules can in principle be quite high. However, the scope for income shifting within a multinational is tightly linked to the scale at which it operates. Tighter enforcement of transfer pricing rules by countries with high taxes may reduce the net return on investments, thereby also causing real activity shifts to countries with lower taxes and/or laxer enforcement.20 This suggests a case for the international coordination of transfer pricing policies. Examples are the exchange of information about the activities of multinationals and agreements about minimum enforcement standards or common transfer prices (for example, see Mansori and Weichenrieder, 1999). Our methodology for isolating the pure income shifting effects opens the door for further research. Firstly, when capital stock data become available it is possible to estimate the effect of relative tax changes on real activity shifts (using the methods from this paper to filter out the possible contamination caused by pure-accounting income shifts). Secondly, with information about the composition of intermediates trade in intangibles and tangibles, one could test whether income shifting is larger in the former case, because it is more difficult to establish proper market prices. Finally, our methodology could be applied to enhance the accuracy of international productivity comparisons. The reason is that income shifting between countries for tax purposes introduces distortions in measured productivity: sales in a low-tax country may be over-reported and intermediate inputs under-reported. Even without changes in the underlying technology, income shifting will lead to an increase in the measured productivity of a country that lowers its corporate tax rate. In fact, this observation has been made in the comparison of productivity between similar firms in Ireland and the UK ( Birnie, 1996).