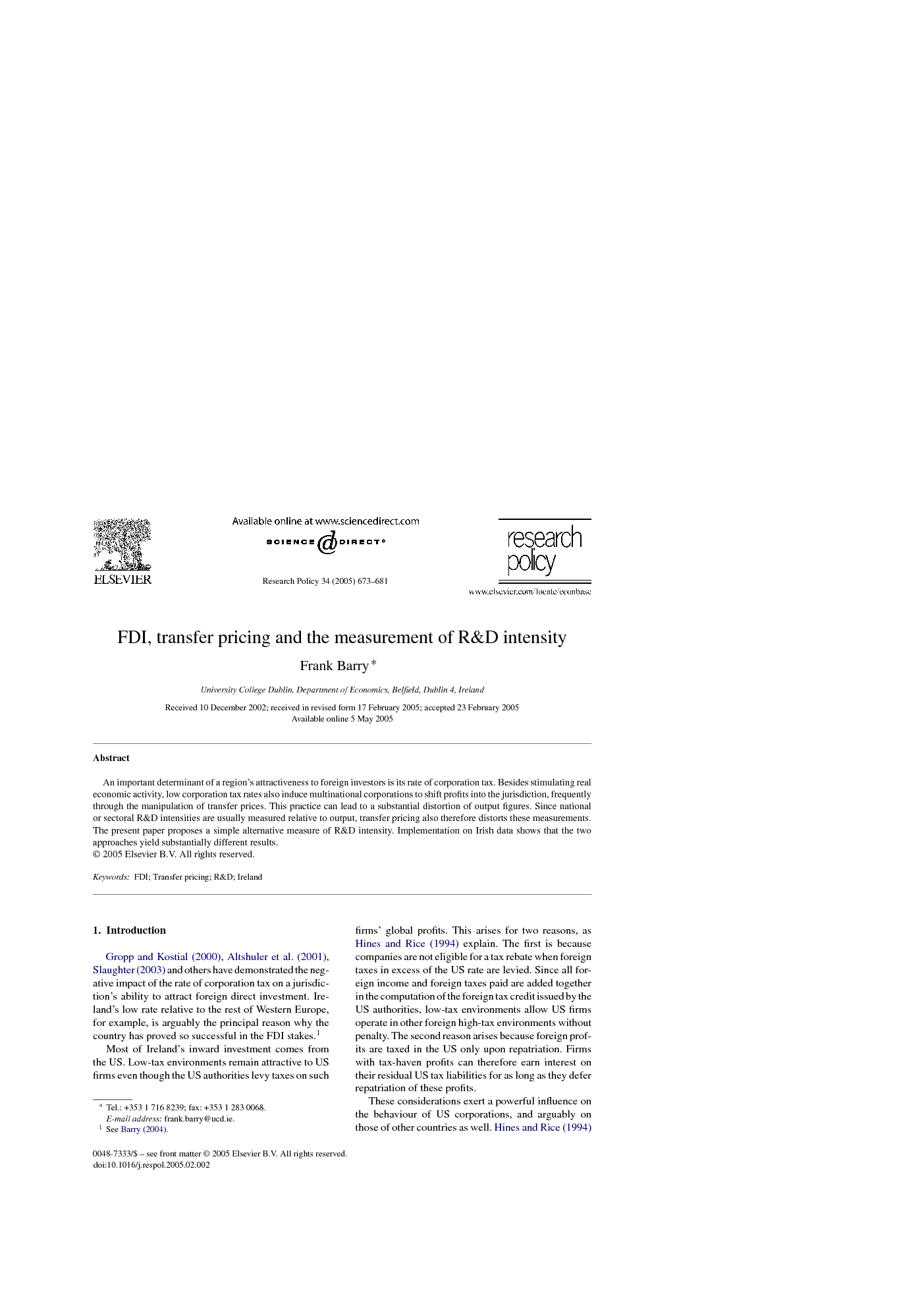 An important determinant of a region's attractiveness to foreign investors is its rate of corporation tax. Besides stimulating real economic activity, low corporation tax rates also induce multinational corporations to shift profits into the jurisdiction, frequently through the manipulation of transfer prices. This practice can lead to a substantial distortion of output figures. Since national or sectoral R&D intensities are usually measured relative to output, transfer pricing also therefore distorts these measurements. The present paper proposes a simple alternative measure of R&D intensity. Implementation on Irish data shows that the two approaches yield substantially different results.

Gropp and Kostial (2000), Altshuler et al. (2001), Slaughter (2003) and others have demonstrated the negative impact of the rate of corporation tax on a jurisdiction's ability to attract foreign direct investment. Ireland's low rate relative to the rest of Western Europe, for example, is arguably the principal reason why the country has proved so successful in the FDI stakes.1 Most of Ireland's inward investment comes from the US. Low-tax environments remain attractive to US firms even though the US authorities levy taxes on such firms’ global profits. This arises for two reasons, as Hines and Rice (1994) explain. The first is because companies are not eligible for a tax rebate when foreign taxes in excess of the US rate are levied. Since all foreign income and foreign taxes paid are added together in the computation of the foreign tax credit issued by the US authorities, low-tax environments allow US firms operate in other foreign high-tax environments without penalty. The second reason arises because foreign profits are taxed in the US only upon repatriation. Firms with tax-haven profits can therefore earn interest on their residual US tax liabilities for as long as they defer repatriation of these profits. These considerations exert a powerful influence on the behaviour of US corporations, and arguably on those of other countries as well. Hines and Rice (1994) identify 41 countries and regions as tax havens for the purposes of US businesses. Though these havens account for only 3% of the West's GDP, and an equivalent share of US affiliates’ employment as well as property, plant and equipment, they account for 31% of US firms’ total foreign-source income. This suggests that corporations are engaged in profit shifting to these tax haven locations. One of the ways in which they do so is through the manipulation of ‘transfer prices’, the prices charged for the transfer of goods and services between a parent company and its foreign affiliates. These prices are supposed to reflect those that would apply to arm's-length transactions between unrelated parties. As Hines and Rice (1994) point out however, there are many goods for which arm's-length prices do not exist – most notably intangible assets – so that enforcement of the law is very difficult.2 Intangible assets are particularly prevalent in sectors characterised by high advertising and R&D expenditures, making it difficult in these cases to locate the precise stages of production at which value is added. Both of the world's major soft drinks companies, for example, produce their valuable cola concentrates to secret recipes in Ireland – presumably from quite basic ingredients – and a similar procedure is followed in the pharmaceuticals sector, in which Ireland plays host to nine of the world's 10 largest corporations. In Ireland, almost 90% of foreign-company employment is found to be in advertising-intensive and/or R&D-intensive sectors, compared to a figure of less than 30% for indigenous industry.3 Manipulation of transfer prices distorts measured output levels and balance of payments statistics in tax haven locations. Among the European regions which Hines and Rice classified as such in 1994 were the Channel Islands, Cyprus, Gibraltar, Ireland, the Isle of Man, Liechtenstein, Luxembourg and Switzerland. Since that time, however, many of the new EU member states of Central and Eastern Europe, in seeking to emulate the ‘Celtic Tiger’ experience, have followed Ireland down the route of low corporation taxes. These data distortions might therefore be expected to become more prevalent in the future.4 The present paper focuses on attempting to correct one such distortion that bedevils the comparison of the R&D (research and development) intensity of industries across countries. The R&D intensity of a sector is typically measured by sectoral R&D expenditures expressed as a share of industry output. For low corporation tax economies, however, the arguments above suggest that this denominator is likely to be artificially inflated, obscuring possible comparisons with other countries. A simple correction to how these indicators are measured is proposed here. The correction is then applied to the Irish data, allowing a comparisons of the original and transformed indicators. The relative R&D intensity of indigenous and foreign-owned industry in Ireland is changed substantially, as is Ireland's R&D intensity compared to that of other countries. The comparison group of countries chosen includes Sweden, Finland, Denmark and Spain. The first three are taken as representative small high-tech economies, while Spain is included as another ‘cohesion country’—the grouping of historically less-well-off EU15 economies that comprised Greece and Portugal as well as Ireland and Spain. The paper is structured as follows. Section 2 presents the standard measure of R&D intensity in each of our five economies, and in indigenous and foreign industry in Ireland, with a discussion of the perceived implications. Section 3 follows with an illustration of the extent to which transfer pricing behaviour may be distorting Irish output data. Section 4 then presents our adjusted measure of R&D intensity and analyses the differences in the results yielded by the two measures.

The difficulties that transfer pricing causes for the interpretation of output data in low corporation tax jurisdictions such as Ireland are well known. Sectoral and national R&D intensities are nevertheless conventionally measured by evaluating expenditures as a proportion of output. The present paper shows that when R&D intensity is instead measured per employee, Ireland's international ranking in the R&D stakes improves substantially, while the performance of Ireland's foreign-owned sector leaps ahead of that of indigenous industry. For an economy whose national income per capita now exceeds the EU15 average, business expenditures on R&D in Ireland nevertheless remain relatively low. Some argue that the low corporation tax regime inhibits R&D. The Circa Group Ltd. (1998), for example, in a report to the state agency Forfás, asserts that “the tax incentives for manufacturing in Ireland are recognised as inhibiting the performance of R&D, since R&D costs can be written off at higher tax rates in the home country”. Hines (in press) argues however that countries with lower statutory tax rates attract greater levels of other forms of investment, making their R&D intensity ratios look low, but that it does not follow from this that they discourage R&D. It is likely, he suggests, that low tax rates indirectly encourage local R&D activities on the part of multinational corporations eager to defend themselves against the charge that rents should not be attributed to their operations in low-tax locations. Whichever of these perspectives is correct, the Irish authorities have made huge efforts to increase business-sector R&D expenditures in recent years and to move, in the language of Kuemmerle (1999) from ‘home-base exploiting’ towards ‘home-base augmenting’ FDI. A new commitment to science, technology and innovation was underlined by a five-fold increase in investment in these areas under the National Development Plan 2000–2006, by the launch in 1998 of the Programme for Research in Third-Level Institutions (which established 24 research centres as well as major programmes in human genomics and computational physics), by the funding by Science Foundation Ireland of five joint partnerships between third level research institutions and industry, and by the introduction of a 20% tax credit for incremental R&D in the Finance Act of 2004. Within ICT alone, the last 2 years have registered a number of significant developments under the new strategy. Bell Labs has announced its intention to set up a major R&D centre at Lucent Technologies’ Dublin facility, linked with the establishment of a collaborative academic centre at one of the city's universities. Similarly, Hewlett-Packard announced the establishment of a world-class Technology Development Centre at its manufacturing facility outside Dublin, while its European Software Centre entered into collaboration with University College Galway in establishing the Digital Enterprise Research Institute. Intel has established an innovation centre at its main site outside Dublin while increasing its investment in its research centre near Limerick. It has also partnered three Irish universities in an academic Centre for Research on Adaptive Nanostructures and Nanodevices. IBM, over this same period, announced further significant investments in its Irish R&D software facility in Dublin. The decision was influenced, according to one of the directors of the company, by the availability of the necessary skills, the strong support of the Industrial Development Agency and the growing emphasis on scientific research by Science Foundation Ireland.