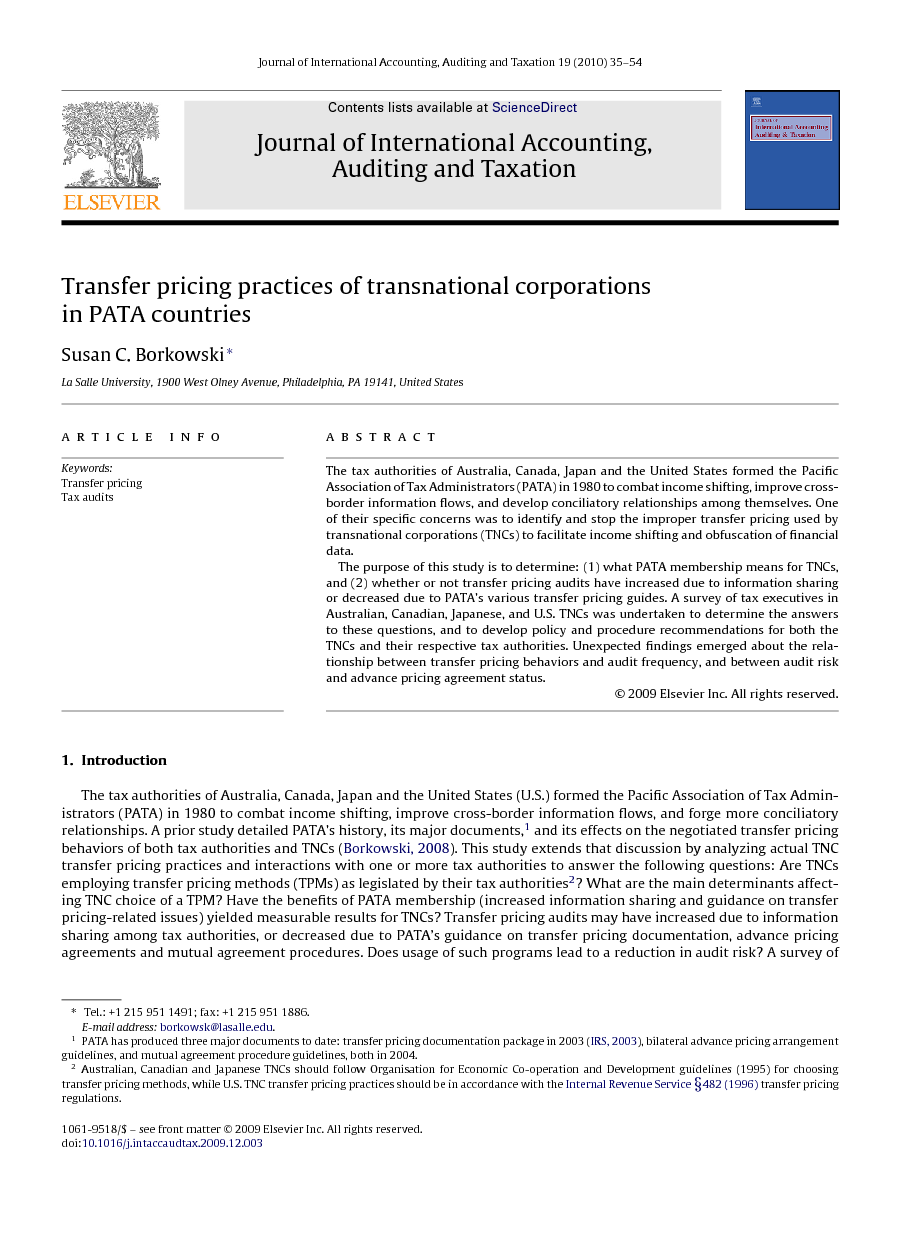 The tax authorities of Australia, Canada, Japan and the United States formed the Pacific Association of Tax Administrators (PATA) in 1980 to combat income shifting, improve cross-border information flows, and develop conciliatory relationships among themselves. One of their specific concerns was to identify and stop the improper transfer pricing used by transnational corporations (TNCs) to facilitate income shifting and obfuscation of financial data. The purpose of this study is to determine: (1) what PATA membership means for TNCs, and (2) whether or not transfer pricing audits have increased due to information sharing or decreased due to PATA's various transfer pricing guides. A survey of tax executives in Australian, Canadian, Japanese, and U.S. TNCs was undertaken to determine the answers to these questions, and to develop policy and procedure recommendations for both the TNCs and their respective tax authorities. Unexpected findings emerged about the relationship between transfer pricing behaviors and audit frequency, and between audit risk and advance pricing agreement status.

The tax authorities of Australia, Canada, Japan and the United States (U.S.) formed the Pacific Association of Tax Administrators (PATA) in 1980 to combat income shifting, improve cross-border information flows, and forge more conciliatory relationships. A prior study detailed PATA's history, its major documents,1 and its effects on the negotiated transfer pricing behaviors of both tax authorities and TNCs (Borkowski, 2008). This study extends that discussion by analyzing actual TNC transfer pricing practices and interactions with one or more tax authorities to answer the following questions: Are TNCs employing transfer pricing methods (TPMs) as legislated by their tax authorities2? What are the main determinants affecting TNC choice of a TPM? Have the benefits of PATA membership (increased information sharing and guidance on transfer pricing-related issues) yielded measurable results for TNCs? Transfer pricing audits may have increased due to information sharing among tax authorities, or decreased due to PATA's guidance on transfer pricing documentation, advance pricing agreements and mutual agreement procedures. Does usage of such programs lead to a reduction in audit risk? A survey of tax executives in Australian, Canadian, Japanese, and U.S. TNCs was undertaken to determine the answers to these questions and to develop policy and procedure recommendations for both the TNCs and their respective tax authorities. The remaining six sections of this article are organized as follows: a brief review of the relevant transfer pricing literature; a discussion of contingency theory and the development of the hypotheses; an analysis of the findings by country; an analysis of the METHOD hypotheses; an analysis of the RISK hypotheses; and, the conclusions and recommendations.

While transnational corporations showed significant differences by country across many demographic, financial, tax and behavioral variables, many of those variables did not affect either transfer pricing method choice or a TNC's audit risk. Of the hypotheses assessing TPM choice and various TNC characteristics, significant relationships were found with domiciled country (the majority of U.S TNCs used profit-based methods, while non-U.S. TNCs preferred transaction-based methods), but not with any other demographic variables. Of the behavioral variables, both advance pricing agreement status (TNCs with advance pricing agreements chose transaction-based methods more often than profit-based methods), and PATA awareness (TNCs familiar with PATA chose transaction-based methods more often than profit-based methods) were significantly related to TPM choice. No relationships were found between financial variables and method choice or tax variable and method choice. Finally, audit status was significantly related to TPM choice since profit-based TNCs experienced higher audit rates than their transaction-based counterparts. The original multivariate analysis explained a TNC's TPM choice as a function of its domiciled country, preference for arbitration, audit status and double taxation status. However, this study shows that in both univariate and multivariate analyses, the causal relationships of TPM with audit and double taxation status are reversed; it is a TNC's choice of TPM that causes higher or lower audit rates and instances of double taxation, not the opposite, as had been originally hypothesized. Of the hypotheses assessing a transnational corporation's transfer pricing audit risk, significant relationships exist between a TNC's audit history and domiciled country, TPM (profit-based methods lead to higher audit risk), industry (extraction and traditional manufacturing TNCs demonstrate higher audit risk), and sales in the U.S. (an artifact of the U.S. and Canadian firms in the sample). The hypothesis of no relationship between audit risk and a TNC's demographic characteristics can be rejected. Awareness of PATA's transfer pricing, advance pricing agreement and mutual agreement procedure guidance, preference for arbitration, and double taxation status (double taxation experience is correlated with higher audit risk) lead to the rejection of no relationship between behavioral variables and a TNC's audit risk. The hypotheses regarding financial and tax variables vis-à-vis audit risk cannot be rejected. The multivariate model explains a TNC's lower audit risk as a function of its domiciled country (Australia and Japan), use of a transaction-based TPM, preference for arbitration, and less double taxation risk. An unexpected finding was that negotiating an advance pricing agreement with a PATA tax authority did not reduce a TNC's audit risk. Instead of being proactive and minimizing audit risk, it seems that advance pricing agreements may be a reactive response to being audited and an attempt to mitigate the effects of the current and future audits. A strong recommendation must be made that each PATA tax authority assesses its advance pricing agreement program in light of these findings. Advance pricing agreements are not providing shelter from audit risk, as currently advertised. TNCs should be encouraged to use advance pricing agreements proactively to mitigate audit risk; however, that will not happen until TNC concerns with time, cost and confidentiality are more adequately addressed by tax authorities. In addition, the U.S IRS should reconsider its promulgation of the “best method” approach in light of the audit findings regarding TNCs using profit-based methods. Concurrently, TNCs should reevaluate how they decide about “best methods.” Given the audit findings, either the IRS does not consider CPM as equal to transaction-based methods, or TNCs are not choosing profit-based TPMs in accordance with the IRS’ requirements for choosing a “best method.” As with any study, caveats must be issued regarding generalizing this study's results to a broader population. The applicability of the results is limited by the small population of Australian TNCs meeting this study's criteria relative to the TNC population in Canada, Japan and the U.S. It is not possible to generate a large enough sample of Australian TNCs to yield statistically robust findings, so this study's conclusions about the transfer pricing practices of Australian TNCs may not apply to other Australian or pan-Asian TNCs. The second limitation arises from this study's inclusion of TNCs and tax authorities exclusively from the four PATA countries. The specificity of the findings to PATA country TNCs and tax authorities may not be apply to TNCs and tax authorities in non-PATA countries. These limitations highlight a specific area for future research: testing some of this study's hypotheses with TNC samples from non-PATA countries. Other research tangents could examine if advance pricing agreement negotiations are proactive (to prevent a future audit) or reactive (to respond to a current audit); how TNCs seek double taxation relief if not through mutual agreement procedures; and, whether or not there is a disconnect between theory and practice regarding the IRS’ stated preference for the “best method”, as implied by the findings of this study.