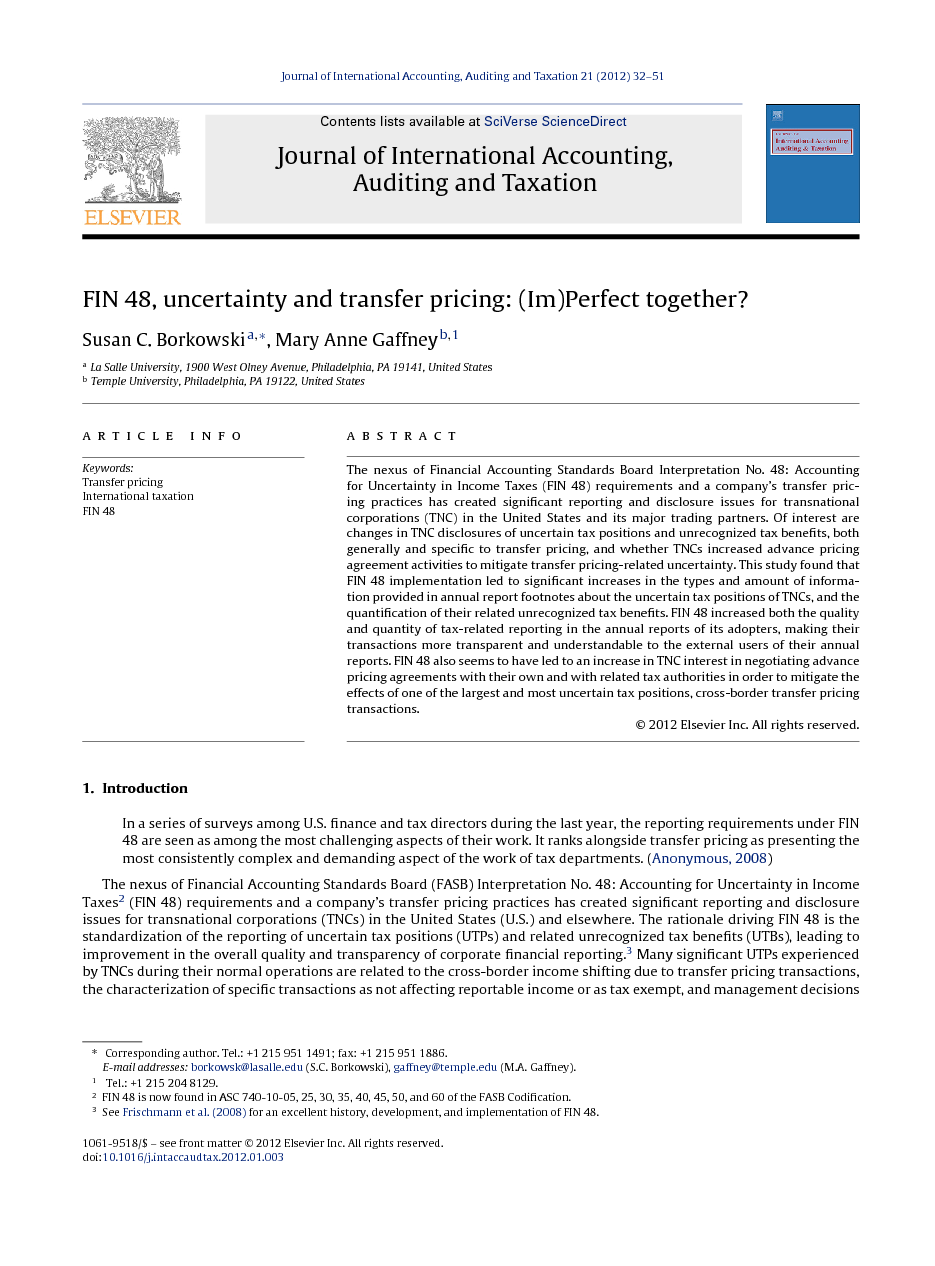 The nexus of Financial Accounting Standards Board Interpretation No. 48: Accounting for Uncertainty in Income Taxes (FIN 48) requirements and a company's transfer pricing practices has created significant reporting and disclosure issues for transnational corporations (TNC) in the United States and its major trading partners. Of interest are changes in TNC disclosures of uncertain tax positions and unrecognized tax benefits, both generally and specific to transfer pricing, and whether TNCs increased advance pricing agreement activities to mitigate transfer pricing-related uncertainty. This study found that FIN 48 implementation led to significant increases in the types and amount of information provided in annual report footnotes about the uncertain tax positions of TNCs, and the quantification of their related unrecognized tax benefits. FIN 48 increased both the quality and quantity of tax-related reporting in the annual reports of its adopters, making their transactions more transparent and understandable to the external users of their annual reports. FIN 48 also seems to have led to an increase in TNC interest in negotiating advance pricing agreements with their own and with related tax authorities in order to mitigate the effects of one of the largest and most uncertain tax positions, cross-border transfer pricing transactions.

In a series of surveys among U.S. finance and tax directors during the last year, the reporting requirements under FIN 48 are seen as among the most challenging aspects of their work. It ranks alongside transfer pricing as presenting the most consistently complex and demanding aspect of the work of tax departments. (Anonymous, 2008) The nexus of Financial Accounting Standards Board (FASB) Interpretation No. 48: Accounting for Uncertainty in Income Taxes2 (FIN 48) requirements and a company's transfer pricing practices has created significant reporting and disclosure issues for transnational corporations (TNCs) in the United States (U.S.) and elsewhere. The rationale driving FIN 48 is the standardization of the reporting of uncertain tax positions (UTPs) and related unrecognized tax benefits (UTBs), leading to improvement in the overall quality and transparency of corporate financial reporting.3 Many significant UTPs experienced by TNCs during their normal operations are related to the cross-border income shifting due to transfer pricing transactions, the characterization of specific transactions as not affecting reportable income or as tax exempt, and management decisions that earmark certain income as not taxable by a foreign tax authority (August, 2008). How has FIN 48 changed the disclosure of these UTPs in terms of their frequency, content, and details provided? Before FIN 48 and the subsequent issuance of Schedule UTP (IRS, 2010), tax authorities dealing with U.S.-based TNCs had little or no information as to which TNC issues might be uncertain, and the monetary amounts of those UTPs. These now mandatory disclosures in the financial reports and tax returns will assist tax authorities in identifying those issues to be assessed further in a transfer pricing audit, and in uncovering evidence of any significant income-shifting activities. FIN 48 also provides external users of financial statements with increased comparability among TNCs of their income tax liabilities and UTPs with the potential to affect future profits. The relationship between FIN 48 and TNC transfer pricing activities has not been studied, given that FIN48 implementation was not mandatory until 2008 for all TNCs following U.S. GAAP, regardless of the parent TNC's home country. The International Accounting Standards Board (IASB) does not yet provide specific guidance to TNCS about UTPs and does not require UTP disclosure, so FIN 48 does not directly affect TNCs with IFRS-based financial reports.4 However, all TNCs must consider FIN 48 implications as the FASB and IASB move toward convergence of their accounting standards. The IASB expects to release an exposure draft on UTPs once its revisions of IAS 12 Income Taxes, and IAS 37 Provisions, Contingent Liabilities and Contingent Assets, are complete. The first of two areas of interest in this study are TNC disclosures of UTPs and UTBs, both generally and specific to transfer pricing. The disclosures are analyzed as to their content matter, frequency, size, and changes over time. The second area of analysis is whether TNC advance pricing agreement5 (APA) activities increased to mitigate transfer pricing-related uncertainties. Disclosures are first assessed both pre- and post-FIN 48 implementation in terms of their dollar impact. A content analysis of these disclosures further addresses the quantity, quality, content and materiality of FIN 48-related information provided by the TNCs in the sample. Finally, actions that TNCs may have taken to mitigate the uncertainty of transfer pricing-related UTPs, specifically APA negotiations, are analyzed before and after FIN 48 implementation. The population consists of U.S. TNCs and Australian, Canadian and Japanese TNCs with subsidiaries in the U.S. These countries’ tax authorities comprise the Pacific Association of Tax Administrators (PATA), a group formed in 1980 to combat income shifting, improve cross-border information flows, discuss transfer pricing-related issues, and forge more conciliatory relationships6. This relationship may also facilitate the negotiation of APAs by TNCs in these countries. As will be explained in Section 3.3, Derivation of the Study Sample, only GAAP-based U.S. and Japanese TNCs were affected by FIN 48 requirements and, therefore, comprise the final sample for the disclosure analysis. For the analysis of APA activity, however, all TNCs from the four PATA countries who negotiated APAs with any of the four tax authorities make up the APA sample. The next three sections present a brief introduction to FIN 48 reporting, transfer pricing, and APAs respectively. The methodology is then discussed, followed by an analysis of the findings, ending with conclusions and recommendations for future research.

The implementation of FIN 48 has led to significant increases in the types and amount of information provided in annual report footnotes about the uncertain tax positions of TNCs and the quantification of their related unrecognized tax benefits. FIN 48 has increased both the quality and quantity of tax-related reporting in the annual reports of its adopters, making their transactions more transparent and understandable to the external users of their annual reports. FIN 48 is also a significant motivating factor in increased APA activity with GAAP-based TNCs’ own and related tax authorities in order to mitigate the effects of one of the largest and most uncertain tax positions, cross-border transfer pricing transactions. The APA increases are also driven by an anticipated IFRS reporting requirement similar to FIN 48, and an overall TNC desire to reduce the uncertainty associated with transfer pricing decisions, regardless of reporting requirements. Rather than tax authorities cutting back or simply maintaining pre-FIN 48 levels of APA staffing, an investment in APA staff should be an immediate and primary focus of the IRS and its counterparts. Much time and money is being spent by these tax authorities in the continuous auditing of what are now TNCs’ post-FIN 48 financial reports. An expansion of the APA program could provide a new level of certainty to all TNCs about their transfer-pricing-related transactions, as well as provide tax authorities with assurances that at least the UTPs associated with transfer pricing have been dealt with properly in the annual reports. A reduction in the time taken to complete an audit would save both the tax authorities and the TNCs significant costs, and make both sets of stakeholders more efficient and effective. A limitation to this study is that the details underlying the APAs negotiated with the various tax authorities are not readily available. One area for future research is an in-depth analysis of APA activity over time in the PATA countries to provide evidence to support some of the other underlying motivations previously discussed, in addition to those of FIN 48. A promising extension of this research is to study the details behind the U.S. TNC FIN 48 disclosures, once the IRS Schedule UTP data becomes available. This extension will provide a better understanding of the nature of a TNCs UTPs, allowing the user of financial statements to better assess the relative risk of a TNC vis-à-vis other TNCs in general, and specifically, in the same industry. Another avenue of research would widen the scope of this study to include the disclosures and APA activity of IFRS- and GAAP-based TNCs in non-PATA countries with U.S. subsidiaries. This analysis would provide support to some of the proposed explanations posited in this study, or provide additional motivating factors that were not evident in this study.