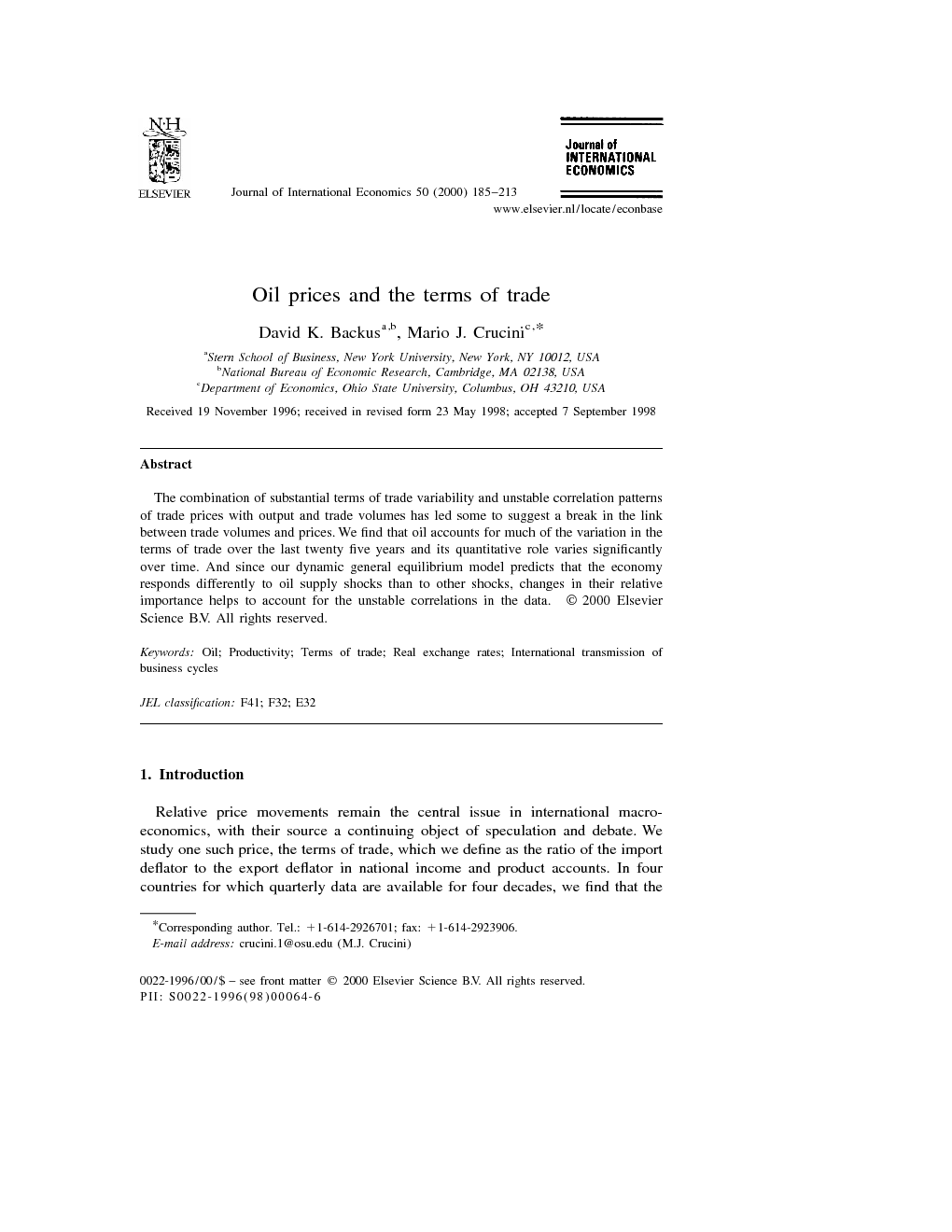 The combination of substantial terms of trade variability and unstable correlation patterns of trade prices with output and trade volumes has led some to suggest a break in the link between trade volumes and prices. We find that oil accounts for much of the variation in the terms of trade over the last twenty five years and its quantitative role varies significantly over time. And since our dynamic general equilibrium model predicts that the economy responds differently to oil supply shocks than to other shocks, changes in their relative importance helps to account for the unstable correlations in the data.

Relative price movements remain the central issue in international macroeconomics, with their source a continuing object of speculation and debate. We study one such price, the terms of trade, which we define as the ratio of the import deflator to the export deflator in national income and product accounts. In four countries for which quarterly data are available for four decades, we find that the terms of trade has been highly variable relative both to real output and to the predictions of existing dynamic general equilibrium models of trade (Backus et al., 1994, for example, or Stockman and Tesar, 1995). This variability, moreover, has been substantially greater over the last twenty years than the first twenty. We also find that the correlation of terms of trade movements with real output and trade volumes varies widely over time and across countries. We show that a large part of the variability of the terms of trade is associated with extreme movements in oil prices. Accordingly, we study the terms of trade and its correlation with other variables in a setting in which events affecting the production of oil interact with the production and sale of other goods. The structure blends the Backus et al. (1994) model of two large industrial countries with the Crucini and Kahn (1996) treatment of international trade in intermediate inputs into production. In our theoretical economy, two industrialized countries produce imperfectly substitutable goods using capital, labor, and oil. These two goods are then aggregated into final consumption and investment goods. A third country produces oil but consumes final goods. This structure mimics in a simple way the interaction between large industrialized countries and largely non-industrial oil producers. The result allows us to study the responses of trade flows and real output to changes in oil production and industrial productivity. As one might expect, the volatility and comovements of the terms of trade depend on the nature and source of disturbances. We consider three different disturbances: a domestic productivity shock, a foreign productivity shock, and an oil supply shock. As in earlier work, productivity shocks alone produce little in the way of terms of trade volatility. The reason, ironically, is that the model generates insufficient variability in export and import quantities. Since quantities and prices are linked (the relative price equals the marginal rate of substitution), lack of variability in the quantities is inherited by the prices unless we adopt unrealistically low substitution elasticities. Two features of the model help us to account for terms of trade variability. First, the supply of oil becomes partly exogenous, leading to dramatic price changes. We think this fits our experience in the 1970s quite well. Second, the technology exhibits little opportunity to substitute oil for capital and/or labor. As a result, relatively small variations in the quantity of oil are associated with substantial variation in its relative price. The same mechanism helps to account for the unstable correlation between the terms of trade and output. In the model, fluctuations in the terms of trade and output generated by productivity shocks are positively correlated, while those generated by oil shocks are negatively correlated. A domestic productivity disturbance leads to an increase in domestic output and a fall in the relative price of the domestic good - an increase in the terms of trade. Oil supply disruptions, on the other hand, lead to output reductions in countries that use imported oil as an input into production and therefore an inverse relation between the terms of trade and output. Unstable correlations are the result, in this setting, of changes over time in the composition of shocks hitting the economy. We elaborate on these and other features of the model in the remainder of the paper.

Recently a number of authors have examined the role of trade in intermediate inputs for the character of international business cycles. Most of these studies have focused on the role of intermediate inputs in producing more comovement in international output than found in one sector models (see for example, Ambler et al. (1995) or Costello and Praschnik (1993)). Exceptions are Kouparitsas (1995), who demonstrates that the pattern of North–South specialization gives rise to volatile terms of trade across developing and developed economies, and Boileau (1997), who shows that trade in equipment can add volatility to the terms of trade of industrialized countries.3 We found that the Hamilton (1983) view of the U.S. business cycle has important implications for international business cycles too. We documented how changes in the terms of trade in major industrialized countries during the period 1972 to 1987 were driven primarily by the dramatic changes in the relative price of a single commodity – oil. Using a suitably adapted dynamic equilibrium model of international business cycles, we found that unstable relationships between relative prices and quantities are to be expected when oil price shocks play vastly different roles across time periods. Once we control for the sources of shocks driving the terms of trade the comovement and volatility of the terms of trade, output, and the trade balance become less puzzling. Given the timing of the oil price shocks, the increased volatility in the terms of trade since Bretton Woods seems largely due to the increased volatility in the relative price of oil rather than the increased volatility of nominal or real exchange rates. A direction that we plan to pursue in future research is to relate the properties of the terms of trade to similar properties of real exchange rates documented by Mussa (1986) and others. Although the two relative prices are conceptually and operationally different, preliminary analysis shows that they are positively correlated in the data. The question then is whether the striking change in the variability of real exchange rates between the pre-1972 Bretton Woods fixed exchange rate regime and the more recent floating exchange rate period is related to the similar change in the behavior of oil prices. Perhaps further work will tell us more.