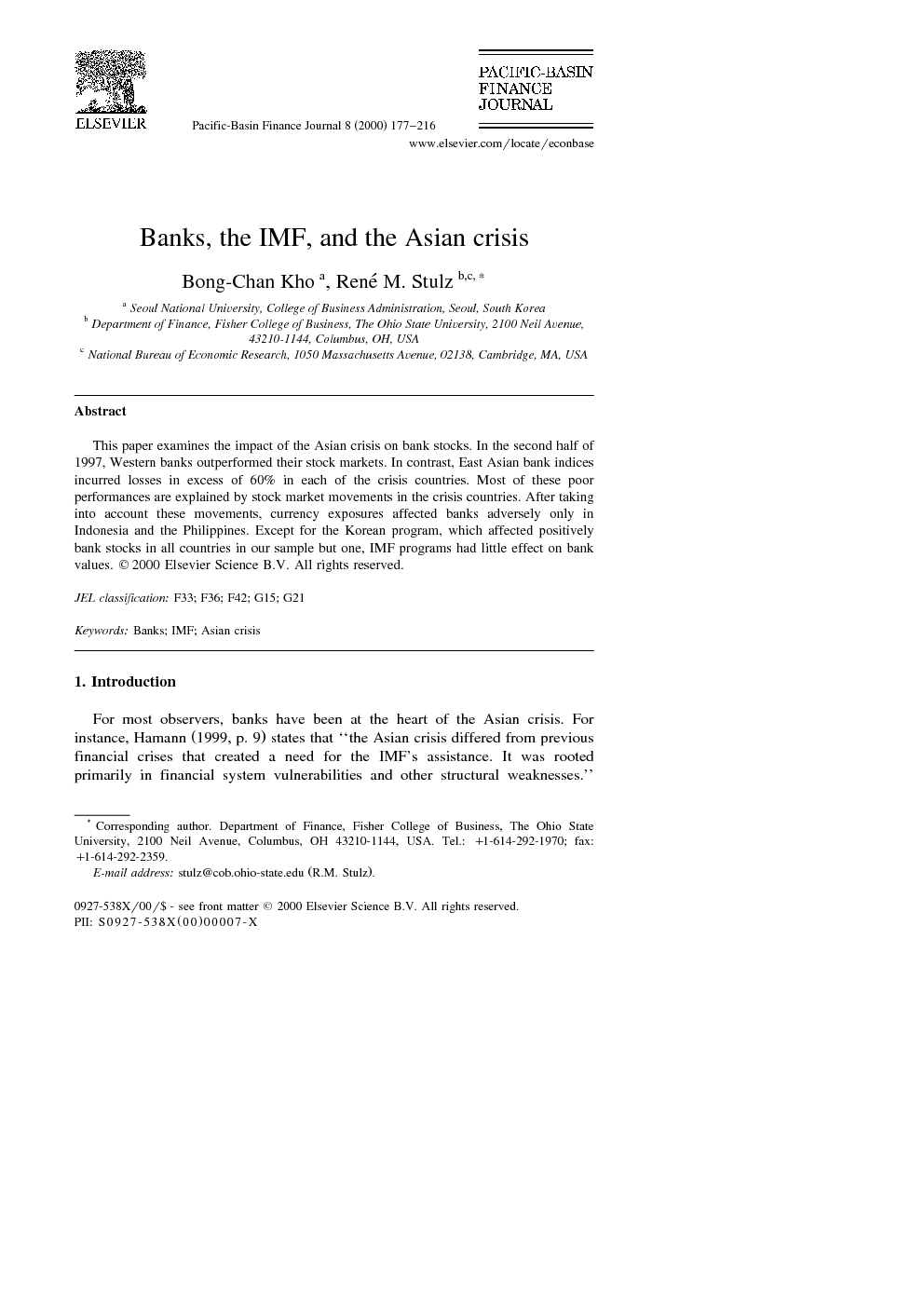 This paper examines the impact of the Asian crisis on bank stocks. In the second half of 1997, Western banks outperformed their stock markets. In contrast, East Asian bank indices incurred losses in excess of 60% in each of the crisis countries. Most of these poor performances are explained by stock market movements in the crisis countries. After taking into account these movements, currency exposures affected banks adversely only in Indonesia and the Philippines. Except for the Korean program, which affected positively bank stocks in all countries in our sample but one, IMF programs had little effect on bank values.

In this paper, we examined the impact of the Asian crisis on the shareholder wealth of Western and East Asian banks. Our main conclusions are as follows. (1) Equity investors in shares in East Asian banks made dramatic losses. (2) The impact of the crisis on Western banks, in general, was small and was not enough to prevent these banks from outperforming their respective markets. (3) Although much attention has been paid to the dramatic loss in value of the East Asian currencies and many have argued that this loss played a major role in the difficulties of the banks in these countries, our evidence shows that changes in exchange rates have no additional explanatory power for the performance of banks beyond their impact on general market movements in Korea, Thailand, and Malaysia. There was a direct impact of currency exposures on bank performance in the Philippines and Indonesia. (4) We can reject the hypothesis that the initial currency collapses across East Asian countries hurt US banks. For instance, Chase Manhattan earned an AR of 5.09% across the 5 days when the East Asian countries announced that they would no longer defend their peg. (5) In total, the IMF program announcements increased bank shareholder wealth. Of all the events we consider, the IMF program announcement with Korea stands out. It is one of five events where we find evidence that banks were significantly affected across countries. Banks with the greatest exposure in the US experienced significant ARs in excess of 7% from this announcement. (6) The IMF program in Korea benefited only those US banks with large exposures in Korea. No case can therefore be made that the IMF programs have the positive effect of somehow reducing systemic risk. Further research should investigate more closely why the currency collapses did not hurt bank shareholder equity more directly. There are three possible explanations worth considering. First, it could be that banks were hedged more than commentators believed they were. Second, it could be that the market expected currency losses to be offset by bailouts. Third, the market might have been inefficient in incorporating information about exchange rate changes. We explored the third hypothesis to some extent and found no support for it. Detailed accounting data would be required to investigate the first two hypotheses.