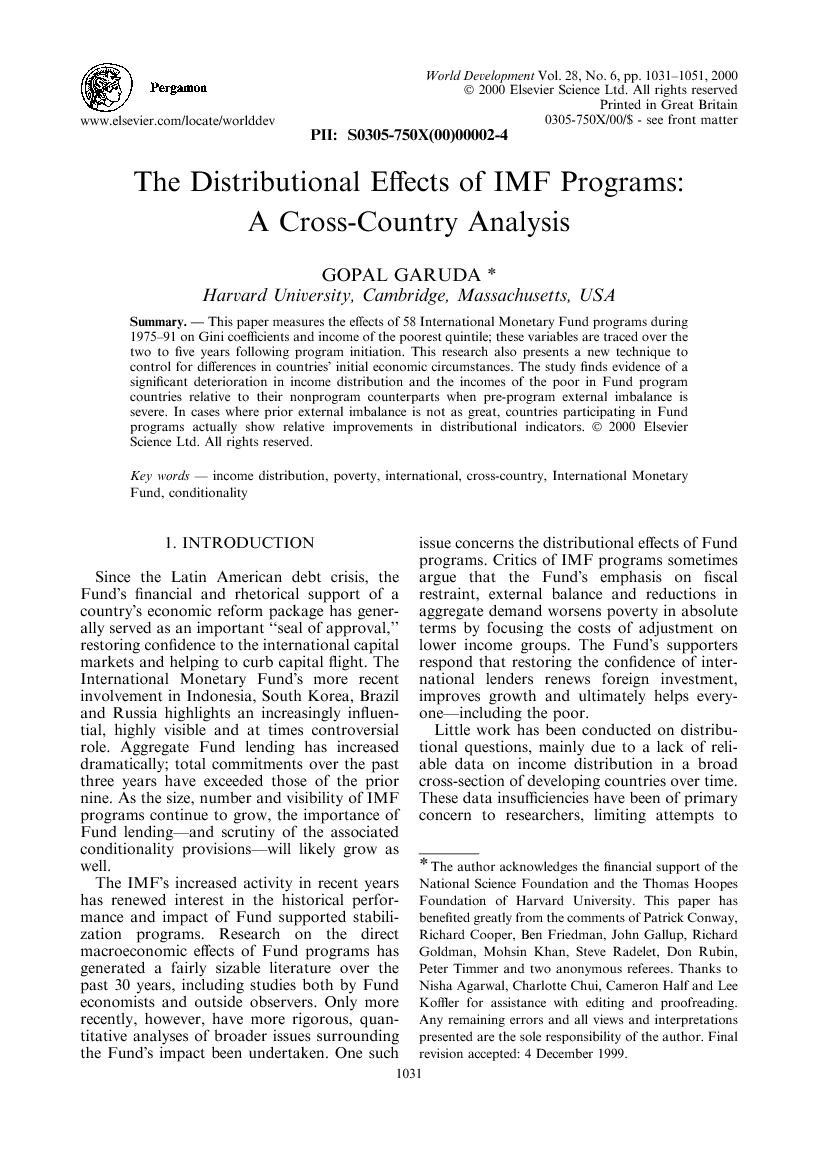 This paper measures the effects of 58 International Monetary Fund programs during 1975–91 on Gini coefficients and income of the poorest quintile; these variables are traced over the two to five years following program initiation. This research also presents a new technique to control for differences in countries’ initial economic circumstances. The study finds evidence of a significant deterioration in income distribution and the incomes of the poor in Fund program countries relative to their nonprogram counterparts when pre-program external imbalance is severe. In cases where prior external imbalance is not as great, countries participating in Fund programs actually show relative improvements in distributional indicators.

Since the Latin American debt crisis, the Fund’s financial and rhetorical support of a country’s economic reform package has generally served as an important “seal of approval,” restoring confidence to the international capital markets and helping to curb capital flight. The International Monetary Fund’s more recent involvement in Indonesia, South Korea, Brazil and Russia highlights an increasingly influential, highly visible and at times controversial role. Aggregate Fund lending has increased dramatically; total commitments over the past three years have exceeded those of the prior nine. As the size, number and visibility of IMF programs continue to grow, the importance of Fund lending—and scrutiny of the associated conditionality provisions—will likely grow as well. The IMF’s increased activity in recent years has renewed interest in the historical performance and impact of Fund supported stabilization programs. Research on the direct macroeconomic effects of Fund programs has generated a fairly sizable literature over the past 30 years, including studies both by Fund economists and outside observers. Only more recently, however, have more rigorous, quantitative analyses of broader issues surrounding the Fund’s impact been undertaken. One such issue concerns the distributional effects of Fund programs. Critics of IMF programs sometimes argue that the Fund’s emphasis on fiscal restraint, external balance and reductions in aggregate demand worsens poverty in absolute terms by focusing the costs of adjustment on lower income groups. The Fund’s supporters respond that restoring the confidence of international lenders renews foreign investment, improves growth and ultimately helps everyone—including the poor. Little work has been conducted on distributional questions, mainly due to a lack of reliable data on income distribution in a broad cross-section of developing countries over time. These data insufficiencies have been of primary concern to researchers, limiting attempts to evaluate the distributional impact of IMF programs to case studies and computable general equlibrium (CGE) models. Unfortunately, generalizing the results of single-country case studies or economic models (themselves highly sensitive to model specifications) is difficult. This study provides new estimates of the effect of IMF stabilization programs on income distribution and the incomes of the poor. The analysis employs a cross-country database on income inequality recently developed by Klaus Deininger and Lyn Squire (Deininger & Squire, unpublished). The sample covers 58 programs in 39 countries from 1975–91. Since the Fund’s impact on poverty may be different from its effect on income distribution, evaluating both may present a clearer picture of the actual distributional impact. The recent development of the Deininger-Squire database considerably softens the data constraints faced in previous work. While the data available are still incomplete, and certainly do not cover all Fund programs, they do present a fairly widespread sample of programs in Latin America and Asia, though data on African countries—and hence, programs conducted in them—remain somewhat sparse. The basic technique is a comparison of a sample of country-years in which a country entered a Fund program to another in which a country did not. The problem faced by these types of “with–without” evaluations of Fund performance—and an important issue in all attempts to measure IMF program performance—is in the establishment of the counterfactual, or determining what “would have” happened in the absence of a program. As pointed out in reviews of the literature on IMF program evaluation, much of the existing work fails to identify its counterfactual appropriately. This study addresses the problem of identifying the counterfactual by using a statistical technique known as “propensity score estimation” to reduce the selection bias inherent in comparing program and nonprogram countries. Propensity score methods have been used extensively in economics to balance treatment and control groups in nonrandomized experiments; for example, Dehejia and Wahba (1998) employ these techniques in evaluating the impact of job training programs and education on participants’ future earnings. Propensity scores serve as proxies for a country’s pre-program economic problems. Specifically, they represent the probability that either program or nonprogram countries would have agreed to an IMF stabilization program ex-ante, regardless of what they ultimately decided to do. 1 While the actual decisions are of course known, propensity scores measure a country’s likelihood of seeking the Fund’s assistance at some point before the decision is made. Once propensity scores are generated, observations can be subclassified into groups by them and separated, within each group, into those cases in which countries went to the Fund and those in which they did not. This process of “balancing” program and nonprogram observations by propensity score controls for systematic differences between the two groups prior to the decision whether to participate in a Fund program. In particular, countries seeking the Fund’s assistance typically face a more unstable pre-program economic climate than those who do not. Failure to control for these pre-program differences would bias our measures of the Fund’s impact.

This study comes to two basic conclusions: participation in Fund programs may have important distributional effects, and both the direction and magnitude of these effects may depend critically on a country’s pre-program economic situation. Specifically, among countries that have a low propensity of seeking Fund involvement, those that do initiate Fund programs show improvements of 10–15 percentage points relative to the control groups in the three outcome measures considered. The results are generally stable over a two to five-year period following program initiation. As propensity scores increase, signifying more severe external balance of payments problems and external disequilibria prior to Fund involvement, the countries that participate in Fund programs show less significant improvements than those that do not. Countries that experienced the most severe pre-program external problems, as represented by a high propensity score, show 10–20 percentage point declines in distributional measures relative to control group countries. The statistical significance of the results at all three levels of propensity scores is quite good and is especially strong at both ends of the propensity score spectrum. Like much empirical work in economics, the conclusions of this study raise more questions than they answer. It is unlikely that exogenous shocks significantly influenced the results. Differences in program implementation in program countries and the composition and extent of adjustment in nonprogram countries might explain some of our results. Further research should more closely compare Fund program-based adjustment to nonprogram policy responses. It should also consider how adjustment varies (in both composition and intensity) across different levels of propensity scores in both program and nonprogram groups. The limited sample size and data quality should also be addressed. First, this study contains comparatively few observations on African countries, limiting our ability to generalize results to the full set of countries that seek the Fund’s assistance. This data constraint has been the major obstacle faced by previous work on this topic as well. Second, one might appropriately question the quality of the full data set. As mentioned at several points, the high-quality data corroborates most of the results achieved in the analysis of the full data. The high degree of similarity in the results of the two analyses suggests that data quality may not be as pressing a concern as we might expect. While the data excluded from the high-quality sample may have contained systematic biases, these biases would have to affect program countries differently from nonprogram countries or be present in one sample in greater proportion than the other in order to distort our results. Finally, the problem of time lags in Fund program impact is significant. IMF programs are typically short-term initiatives, lasting between one and three years, although some of the ESAF programs have longer durations. The impact of Fund programs on poverty and income distribution is likely to occur with a longer lag. Unfortunately, the size of our data set diminishes rapidly as the length of lag increases, making it difficult to calculate effects for longer than five years after program initiation. Ultimately, the prospects for more complete analysis should improve as data become available for more programs. In light of the ongoing and sometimes polemic debates over the Fund’s distributional impact, attempts to measure these effects should be particularly useful in informing policy discussions. This study’s main finding is that the distributional impact of a Fund program may depend critically on the initial state of economic imbalance, represented by the propensity score. The research tends to support the Fund’s recent advocacy of “contingency credit lines,” which allow countries to pre-qualify for IMF funds before emergency measures are required. Since such situations essentially encourage countries to initiate programs at low propensity scores (i.e., before a financial crisis occurs), the distributional consequences of this initiative may well be encouraging.