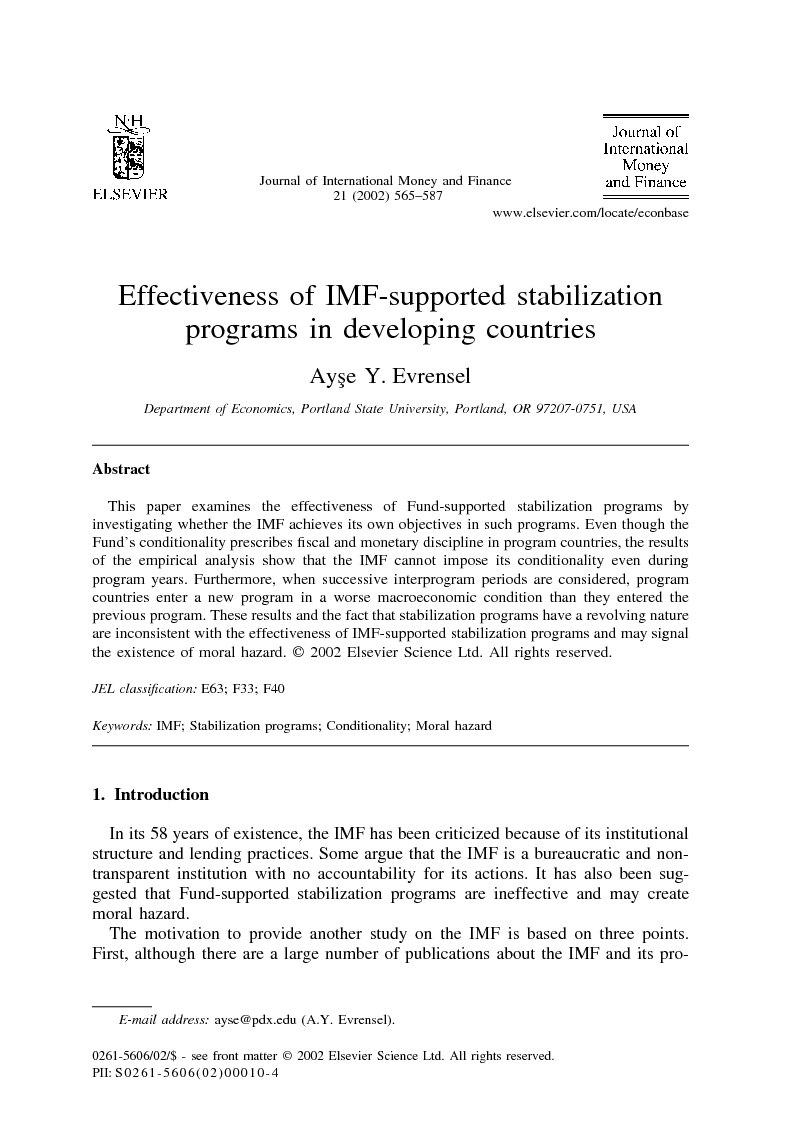 This paper examines the effectiveness of Fund-supported stabilization programs by investigating whether the IMF achieves its own objectives in such programs. Even though the Fund’s conditionality prescribes fiscal and monetary discipline in program countries, the results of the empirical analysis show that the IMF cannot impose its conditionality even during program years. Furthermore, when successive interprogram periods are considered, program countries enter a new program in a worse macroeconomic condition than they entered the previous program. These results and the fact that stabilization programs have a revolving nature are inconsistent with the effectiveness of IMF-supported stabilization programs and may signal the existence of moral hazard.

In its 58 years of existence, the IMF has been criticized because of its institutional structure and lending practices. Some argue that the IMF is a bureaucratic and nontransparent institution with no accountability for its actions. It has also been suggested that Fund-supported stabilization programs are ineffective and may create moral hazard. The motivation to provide another study on the IMF is based on three points. First, although there are a large number of publications about the IMF and its programs, most publications express opinions about the Fund without providing quantitative evidence. There are several quantitative evaluations of Fund programs, most of which have been provided by the IMF (Reichmann and Stillson, 1978, Donovan, 1982, Loxley, 1984, Goldstein and Montiel, 1986, Khan, 1990, Joyce, 1992, Doroodian, 1993, Conway, 1994, Killick, 1995, Santaella, 1996 and Knight and Santaella, 1997).1 Second, the recent efforts to widen the IMF’s responsibilities make a quantitative study on the effectiveness of Fund-supported adjustment programs both timely and appropriate. In 1997, the IMF introduced the Supplemental Reserve Facility that provides large, short-term loans to countries in financial crises, as in the cases of Korea, Russia, and Brazil. Third, motivated by the idea that Fund resources provide ex-post assistance in a crisis, but realizing that they do not reduce the frequency and intensity of financial crises, it has recently been suggested that the IMF should assume the role of an international lender of last resort (Fischer, 1999). However, before defining new responsibilities for the IMF, one should be concerned with the performance of the Fund in its traditional roles. This paper focuses on the effectiveness of Fund-supported stabilization programs for developing countries and has four characteristics. First, this study does not question the IMF’s existence, its rationale, its programs, and the content of conditionality associated with these programs.2 This paper’s approach to program evaluation is to use the IMF’s criteria to see whether the IMF achieves its own goals in these programs. Second, this study uses a broader data set than previous program evaluations in terms of the types of balance of payments programs (four types), the number of program countries (91), and the length of the period under investigation (1971–97). Third, it provides a discussion of alternative evaluation methods and their weaknesses before the selection of the evaluation method. Fourth, the method of program evaluation is based on the observation of relevant variables during pre-program, program, and post-program years. Additionally, this paper attempts to relate program evaluation to moral hazard associated with the Fund’s lending. The organization of the paper is as follows. Section 2 describes this study’s approach to program evaluation, and provides a critique of previous evaluations. Section 3 constitutes the empirical part in which Fund-supported stabilization programs are evaluated using the data on 91 developing countries for the period 1971–97. Finally, Section 4 summarizes the results of the empirical analysis and discusses the effectiveness of stabilization programs.

During the period 1971–97, developing members of the IMF received a stabilization program for more than one-third of the time. There has been an increase in the frequency of IMF-supported stabilization programs since the introduction of SAF and ESAF in 1986 and 1987, respectively. In the post-1986 period, countries received support from the IMF almost half of the time. The results of the before–after analysis indicate that stabilization programs significantly improve current account and reserves during the program years. Although stabilization programs seem to provide short-term balance of payments relief, these improvements are not sustained during the post-program period. Additionally, conditionality may not be effectively imposed even during the program years. Although conditionality prescribes a reduction in the size of the public sector, variables such as domestic credit creation and budget deficit are not significantly affected by conditionality during the program years. The results of the temporal interprogram analysis suggest that, on average, program countries enter a new program in a worse macroeconomic situation than before. Considering the revolving nature of the Fund support, this result is inconsistent with the effectiveness of stabilization programs and may be interpreted as a signal of moral hazard. The currency crises of the last few years have intensified discussions regarding the role of the IMF in the international financial system where the emphasis has been on the future role of the Fund. More recently, some would like to give the IMF the responsibility of becoming the international lender of the last resort. Suggestions regarding the Fund’s future will be misguided if its past performance is ignored.